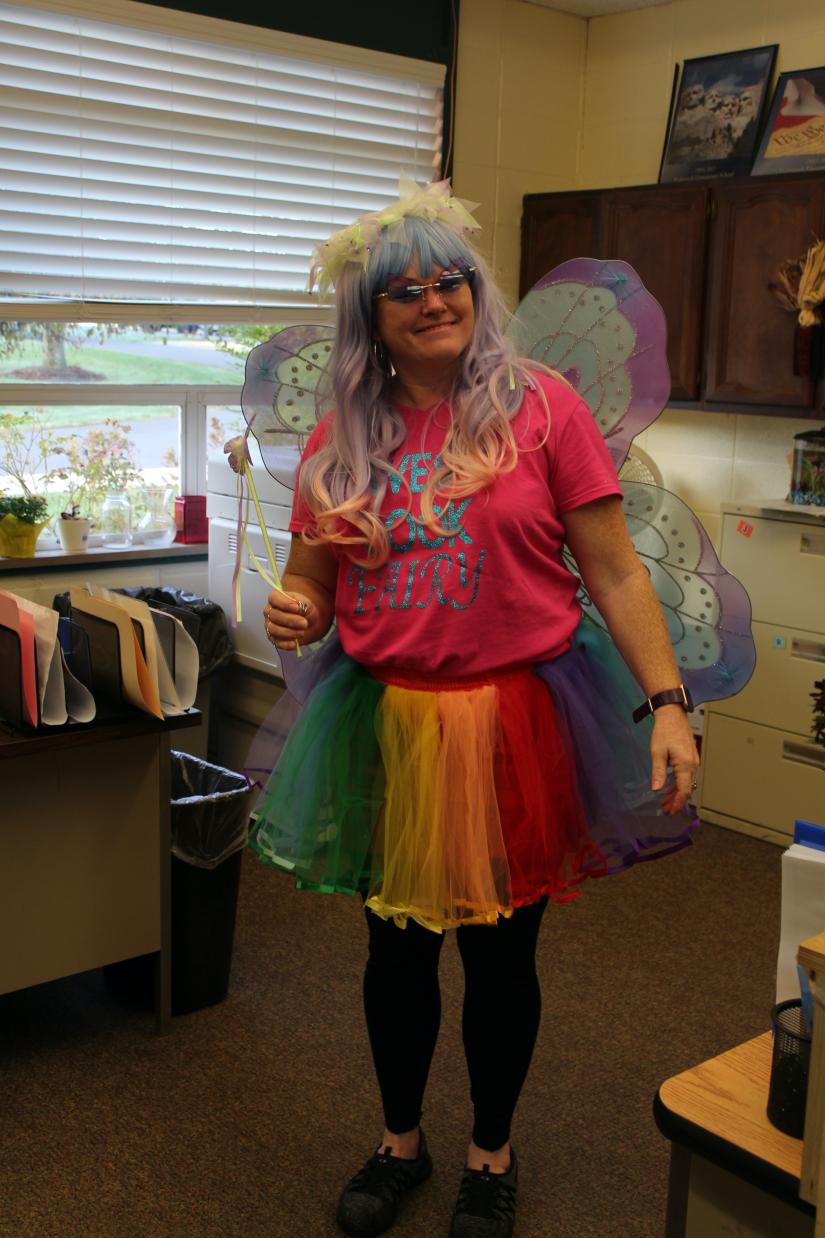 With a touch of magic and a wave of her wand, Webutuck Elementary School Principal Jenn Hengen transformed herself into the Book Fairy for Halloween before making the rounds to read “The Giving Tree” in November. Photo submitted

The hope is to engage students in the Positive Behavior Intervention and Supports (PBIS) character trait of the month program and for parents become a part of the classroom.

As far as how the idea for the Book Fairy took flight, Principal Jennifer Hengen said WES is currently considered a comprehensive support and improvement (CSI) school. That means it needs a comprehensive educational program geared toward academic improvement.

WES was previously identified as a CSI school in early 2019 due to its low student performance rate. In response, a committee of parents, teachers and administrators formed to address academic improvements and enact academic interventions.

While the committee was working on its plan for the current school year, it looked at improving parent engagement and student voices as well as inclusivity and differentiation.

To gather ideas, the committee conducted a student survey, a parent survey and a staff survey.

In their responses, Hengen said students mentioned they wanted more ways to have their parents be part of the classroom and engaged in what they’re doing. Out of the surveys “came something fun and exciting to engage our students in our PBIS character trait of the month to promote school safety and behavior,” she added.

Now, each month, Hengen said the Book Fairy reads a book to exemplify a trait on the PBIS character tree.

Asked how they choose the trait, she explained WES has an all-school assembly every six-day cycle that focuses on the Word of the Week and the character trait of the month.

To give the students a taste of what to expect, Hengen dressed up as the Book Fairy for Halloween and later sent out a video to parents to watch and share with their children. She also sent parents a list of birthdays for the month, the featured character trait of the month, the Word of the Week and a book for them to read to their children — all of which she hopes will spark conversations at home and reinforce the program’s message.

With gratitude and thankfulness as November’s PBIS traits, Hengen picked out Shel Silverstein’s classic story, “The Giving Tree.” She then went to each WES classroom on Tuesday, Nov. 23, to read Silverstein’s book aloud to students.

After reading the book to each class, Hengen added “The Giving Tree” to each classroom’s library so students may check it out and read on their own.

In addition to engaging them in the story, the Book Fairy asked students to think about what they were thankful for, especially with Thanksgiving just days away.

Asked how far she plans to take this new program, Hengen said she’ll be the Book Fairy until the end of the school year. With “cooperation” listed as next month’s PBIS character trait, she anticipates making her rounds to read  “Pumpkin Soup.”