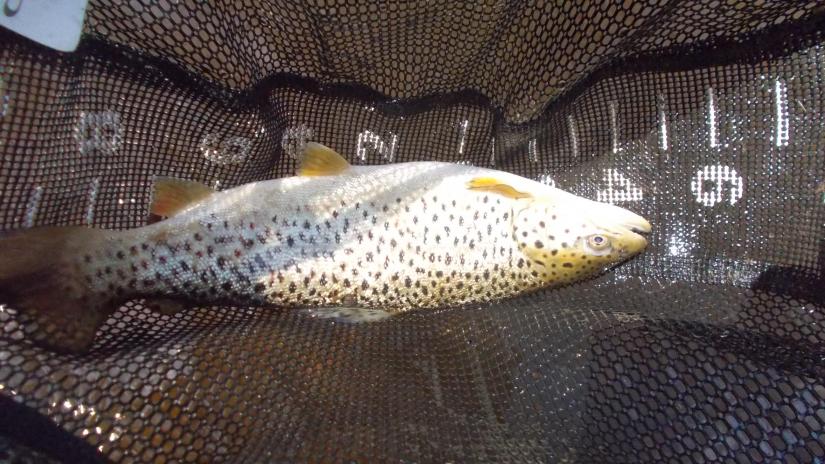 A stocked brown trout from the Blackberry River in North Canaan, Conn. The state has stocked the stream several times in recent months. Photo by Patrick L. Sullivan

A fisherman’s journal amid a pandemic

The gist of fishing right now is: There are three brook trout streams in nearby Conneciticut, the Blackberry and the Furnace Brook in North Canaan and the Housatonic, all within 20 miles of Lakeville (staying in-state).

I can avoid other people quite easily on any of these bodies of water. I’ve been doing it for decades, never mind pandemics.

The Farmington is only 20-odd miles away but it’s just far enough that if anything should happen, such as spraining an ankle or the car breaking down, I would have to holler for help and thus risk exposure and/or exposing someone else. It’s also crowded, perhaps more so than usual.

So no. Staying put means fishing nearby.

I’ve been keeping a pandemic fishing journal. Here are some recent entries:

Last bit of April to May 2: Rain. Endless rain. Had a decent Blackberry day in there, and a decent Secret Stream day, but from the evening of Thursday, April 30, into the next morning, May 1, it rained hard. (Which was good because I was worried about the crops.)

The Housatonic was up well over 3,000 cubic feet per second, and the tributaries were pretty much blown out. Managed one little brookie in the raging torrent at the falls on Mount Riga before calling it quits and trudging home to watch (i.e. nap through) the “Ancient Aliens” marathon on television.

May 5: Spring arrived for a couple of days but everything, I mean everything, was too high to fish.  Yesterday the Blackberry was still a tad high but clear. My buddy Dave was there experimenting with Euronymphing and catching some fish. I managed several with a shorter rod and a Tenkara rod. One streambred 17-inch rainbow was in the mix of stockers.

May 6: Cold and awful and I was nailing fish right and left on the Blackberry downstream of the old iron furnace — including three hefty rainbows who got the “compassionate release” treatment, meaning I couldn’t seal the deal with the Tenkara rod (a cheapie called Galaxy Ray). That’s what you get for fishing heavy flies downstream with a rod that has no reel.

May 8: Chilly and very slow. Explored the Whiting River in North Canaan, nothing doing; ditto the upper stretch of the Blackberry, where you have to walk around a corn field to get at the stream.

There are two deep chutes next to some riprap where I have plucked some nice fish in previous years but nothing today. Went back to “old familiar” and hiked up a very pretty stocked brookie and a couple of rainbows, out of the pool right below the furnace dam. One of them had the sporting attitude and jumped a couple times. All this with a Dragontail zoom rod, which has become my go-to for fixed-line fishing.

May 9: Woke up to a dusting of snow. Apocalyptic thoughts ensued.

May 10: Cold, windy, intermittent sun and the dulcet tone of a chainsaw and leaf blower ringing in my ears. Caught one Basic Blackberry Bow, tickled a brown, and gave it up after a couple hours.

I am thoroughly sick of the Blackberry.

May 17: Yesterday I took the first serious 2020 foray into the Wachocastinook (aka Riga) Brook, a Class I wild trout stream in Salisbury.

By “serious” I mean clambering in there to the point you either have to keep going upstream until you hit a) an old logging road or b) continue upstream to the falls in order to get out of there.

Or you get to the Point of No Return and, well, return.

I started about 10 a.m. and fished mostly unsuccessfully until about noon, when the switch was flipped and they started hitting things: Deer Hair Sedge and the more traditional and bulkier Elk Hair caddis dries; assorted soft-hackle wets, traditional and kebari; smallish but heavy nymphs, particularly a size 16 Rainbow Warrior.

As per usual the fish were small, nothing topping 8 inches. All wild browns and brookies.

Unhappily the Canon point-and-shoot camera decided to die again. It got dunked earlier this spring and I gave it the bag of rice treatment, and for a while it worked. But it has apparently relapsed and sits, mute and unblinking, on the kitchen counter, awaiting disposal.