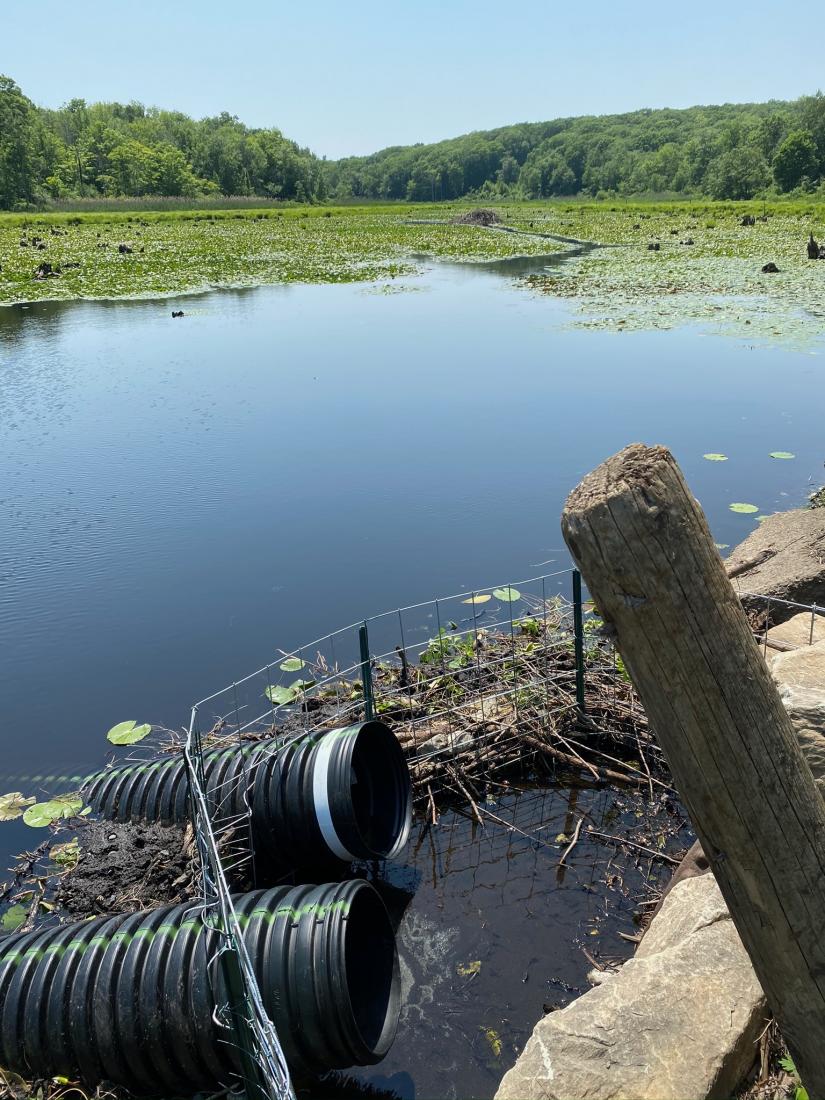 An ingenious flow system, installed in June to foil beavers, is protecting a culvert along West Woods Road #2 in Sharon, keeping the water flowing and preventing road flooding. Photo by Leila Hawken

SHARON — Beavers are unquestionably cute and great for ecosystems, but they are also pesky. Their dams interfere with the town’s drainage culverts and flood roads in some instances. They contribute to erosion and washouts in other places, particularly on gravel roads.

The problem seems to have been solved in June through ingenious trickery, thanks to the Beaver Institute of Massachusetts and grants from the Wiederhold Foundation of Connecticut to fund work by Beaver Solutions, LLC of Southampton, Mass.  Grant funds to support the work totaled $750 for two locations (one was $500, the other $250), said Sharon First Selectman Brent Colley, who was reached for comment on Thursday, July 2.

The Wiederhold Foundation is active in support of the Connecticut Beaver Initiative, which assists landowners with beaver problems and raises awareness of the beavers’ ecological contributions as a “keystone” species, creating natural wetlands.

The two problem locations were West Cornwall Road near Roy Swamp and West Woods Road #2, where erosion and flooding were a constant threat to the roadbed and motorists. Fences paired with pipes were the answer.

Because the highway is paved going past the Roy Swamp site, the problem was not pavement erosion, but rather that the beavers installed their blockage in mid-pipe, causing water to back up and cause erosion around the drainage pipe.

The “Beaver Deceivers” as they are called were invented in Maine by Skip Lisle, in partnership with the Penobscot Indian Nation. Beavers are attracted to the siren song and the feel of running water, such as is found in a culvert for example.

Installing a flow device to silence the sound does the trick. Fencing to further protect the culvert makes it a cost-effective, long-term humane solution.

“It would cost more to trap them than to do this,” Colley added.

From a beaver’s perspective, the presence of the fencing is a deterrent to any construction project because it would just be too much work.

Besides, there is no sound of water flowing.

So, the beavers pass the culvert by and the roadway remains safe.

Maintenance is minimal, Colley said, requiring only intermittent cleaning of leafy debris from the fencing.

“I hope more towns get into this,” Colley said. “It works — so far, so good.” He said the town will budget to continue the effort at other local beaver problem sites.