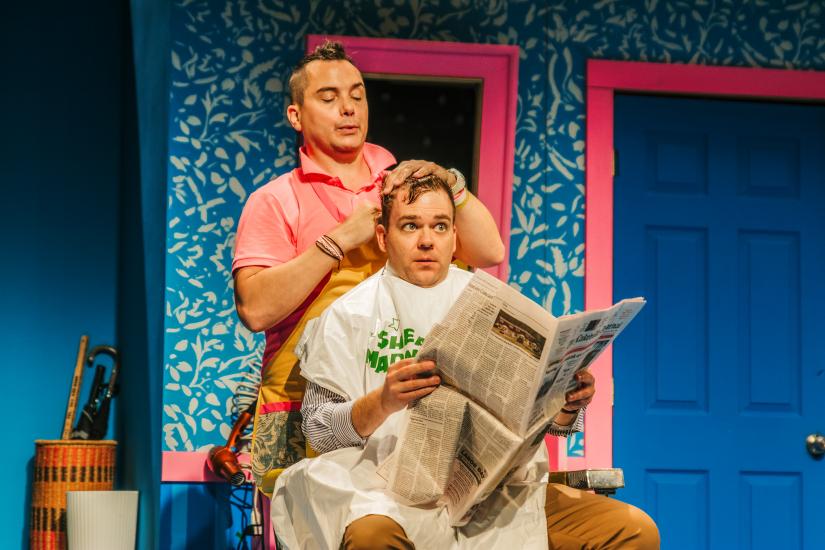 Taking ‘Shear Madness’ over the top at the Playhouse

SHARON — On the opening night of Sharon Playhouse’s production of “Shear Madness,” the show started before everyone had even taken their seats. Those filing in early were greeted to the full view of the show’s setting: a cheeky, garish beauty salon done up in a color scheme that can best be described as a combination of Listerine-blue and lawn ornament flamingo-pink.

Perhaps echoing the gaudy hues of John Waters’ 1970 camp oeuvre of suburban-set dark comedies, the sight of the salon clued us all in — we were headed somewhere decidedly over the top. Sit down early and you’ll see the pre-show choreographed to some danceable oldies, as the loudly dressed but largely incompetent hairstylists Barbara (Soneka Anderson) and Tony (Michael Kevin Baldwin) get to work on their first customer (Will Nash Broyles). The tone is thoroughly made clear with a wash, rinse and cut where everything that can go wrong, does go wrong. Baldwin goes to a full 10 with his commitment to the physical comedy, and the working sink and hair dryer elevate the bit.

The lights dim and the show really starts as the salon is soon filled with the remaining players/customers. Without giving too much away, “Shear Madness” is a murder mystery in wacky neon, a hair-brained Hercule Poirot whodunit. Like “Murder on the Orient Express,” a crime most foul is committed offscreen and the confined, single-set location points the finger at everyone as a suspect. Some play detective and some look especially guilty as past indiscretions are revealed. Par for the Christie course, the two stylists and their four customers are painted as broad-stroke stereotypes: Broyles is a mild-mannered normie, Patrick Noonan is a straight-shooting, blue-collar Red Sox fan, Gil Brady is a greedy antiques dealer in a suit, and Sandy York is an uppity, moneyed matron. Barbara we’re supposed to read as a low-brow gossip (though Anderson can’t help but play her as a genuine human). While Baldwin’s effeminate mincing as Tony may be long dated, the opening night audience couldn’t get enough.

You’d be forgiven if 20 minutes in you surmised that this was a show scripted a month ago by the Playhouse staff. Many of the jokes (and there is a joke almost every line, no need for lengthy set-ups) involve a full-serving of specific local color — a small selection of name-checks include the salon being set on Sharon’s Main Street, a bad date at The Boathouse, and York’s aging socialite character with the maiden name Hotchkiss with an address on Beaver Dam Road. The classic Broadway punchlines that would implicate a Manhattan audience in skewering New Jersey are here directed (not entirely kindly) at less affluent areas in Sharon’s vicinity, like Torrington, Dover Plains, or Wingdale.

The origins of “Shear Madness” extend back to a German play from the 1960s, which was adapted for American audiences in the late ’70s by producing team Marilyn Abrams and Bruce Jordan, who also originated the roles of Barbara and Tony. Their show has had a lengthy, record-breaking touring run, with Jordan continuing to direct — the Playhouse’s production included. One is left to imagine that the naughty script functions as a kind of loose Mad Libs-style game, with fill-in-the-blanks left for everything from specific locations, street addresses, stores, restaurants and pop culture references, depending on where (and when) “Shear Madness” is performed. No points if you predict you’ll hear a Fauci zinger.

The speedy script gives the very game cast little chance to breathe as they run circles around the salon, and if not every moment landed on opening night, they worked hard to pull out the big laughs from a vocally delighted audience.  Noonan’s crowd work is particularly self-assured, having performed the role Off-Broadway and in multiple other locations.

As the summer season comes to a close, there’s a clear sense of confidence in The Playhouse taking a chance and deviating from the musical classics for a late August romp. If the murder theories and speculations buzzing around the patio bar at intermission were any indications, they likely have an irreverent crowd-pleaser on their hands.