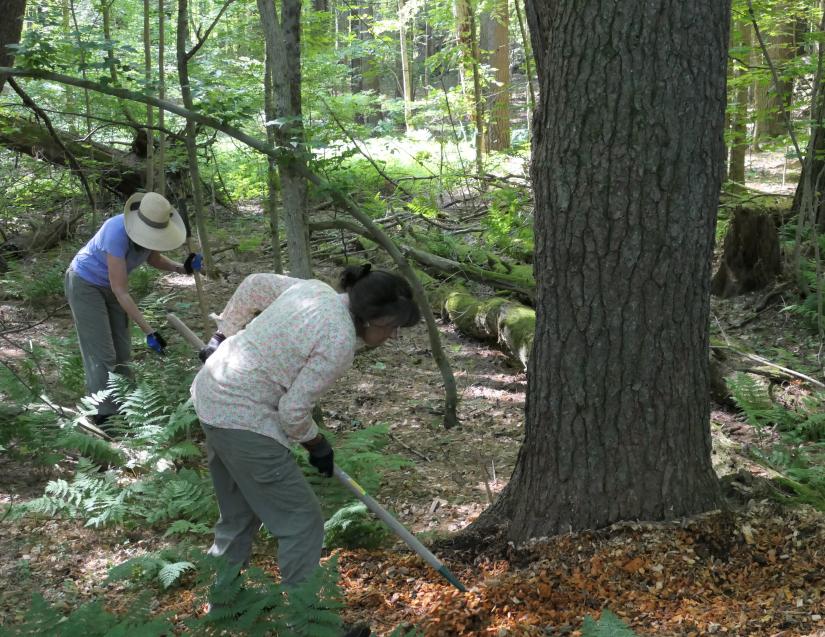 Volunteers Katherine Freygang, left, and Deb Bennett cleared wood chips from the base of pine trees to prevent rotting on Sunday, July 24, at Housatonic Meadows State Park in Sharon. Photo by Lans Christensen

The Connecticut Department of Energy and Environmental Protection's (DEEP) draft policy is mandated by Public Act 22-143, Section 17, which was passed by the Legislature at the end of its session in May. The law is an attempt to oversee  the state's management of hazardous trees in state parks and campgrounds, and was triggered by the cutting of more than 100 trees at Housatonic Meadows.

DEEP held a virtual meeting this month to allow for public comment on the draft policy, with written comments due by mid-July.

The crux of criticism of the new draft policy is that it focuses narrowly on “Heritage Trees” — not all trees targeted as hazardous — under its proposed new procedures.  The agency defines a Heritage Tree as one “recognized by DEEP for its unique size, age, historic or cultural significance, or aesthetic or ecological value.”

DEEP personnel may determine if a tree constitutes a Heritage Tree after review of public input and by following criteria established in training.

“Arborists shall be consulted when determining whether a Heritage Tree should be identified as a Hazard Tree, and if so, how such hazard may be cost effectively mitigated,” the draft states.

The DEEP personnel conducting the inspection will consider the recommendation of the arborist and availability of resources, to determine mitigation measures.

For any tree not identified as a Heritage Tree, trained DEEP personnel can assess the defect on the tree. Facility supervisors will determine corrective actions for Hazard Trees that are not Heritage Trees, according to the draft policy.

“DEEP’s draft, as currently written, has narrowed the process practically to the point of simply maintaining the status quo, which goes against both the intent of the bill ( Public Act 22-143, Section 17) and citizen engagement,” the Berkshire-Litchfield Environmental Council wrote.

Katherine Freygang, a member of Housatonic Meadows Preservation Action (HMPA), a citizens group that has found new levels of collaboration with DEEP employees on the ground, wrote: “Trust is being built with combined expertise and goodwill. I am appreciative of these [DEEP]employees. However, this [draft policy] is not supporting them or our collaboration either.”

Bruce Bennett, the tree warden in Kent and a HMPA member, wrote: “My concern about limiting this policy to such a small group of Heritage Trees increases the potential removal of any healthy tree with marginal justification.”

Freygang, Bennett and other members of HMPA held their first clean-up session at Housatonic Meadows on Sunday, July 24, to remove rotting wood chips from the bases of pine trees and to plan next steps.

“We are in the process of doing a thorough review of the public comments received,” DEEP said in a statement,
“and will also review any internal comments/questions from divisions within the Environmental Conservation branch (including Forestry, Fisheries, Wildlife, and State Parks) to get a diverse perspective before finalizing the policy.”

At the July virtual hearing, DEEP Deputy Commissioner Mason Trumble noted three principal highlights of the policy, which include the hiring of licensed arborists to assess the designation and removal or mitigation of a tree targeted as hazardous, advance notice to the public with physical signage and online notification and consideration of replanting to offset the value of a tree that is removed.

The new law also requires DEEP to complete a tree-planting demonstration project at Housatonic Meadows State Park and file a report on its tree-replanting strategies.