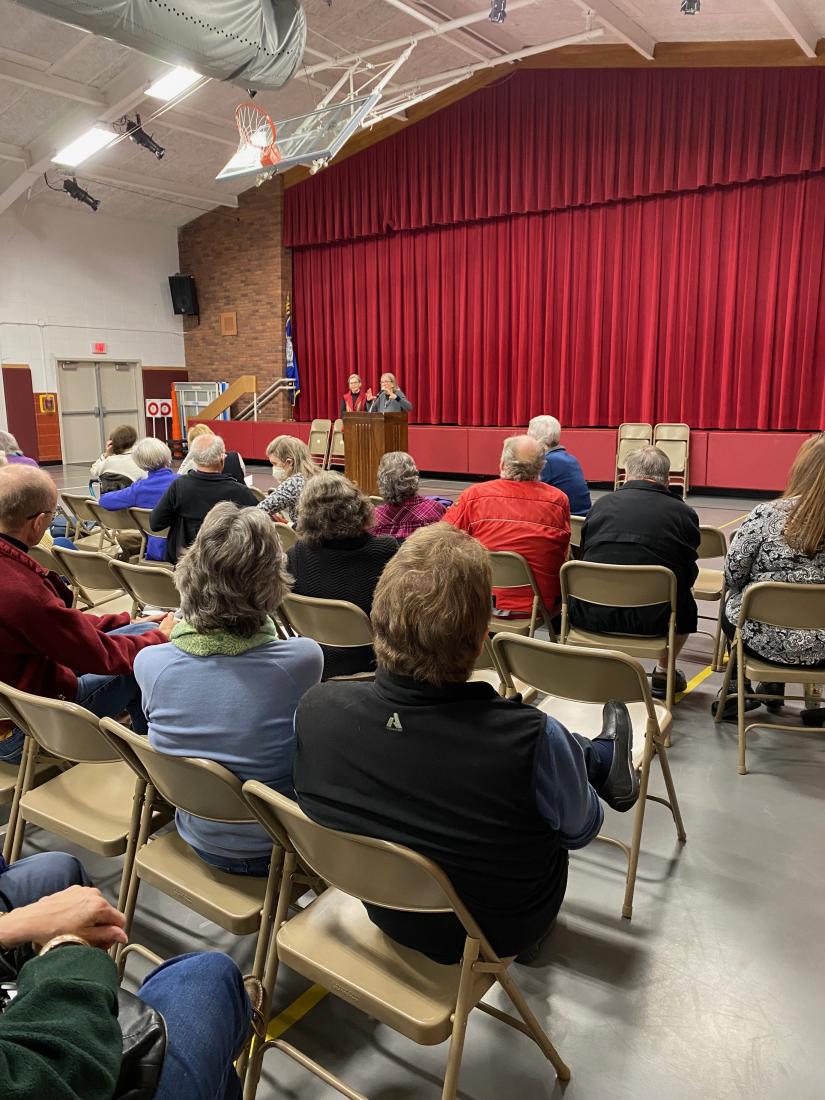 Townspeople turned out in force for a town meeting on Thursday, Nov. 10, to discuss and later approve a Comcast proposal to partner with the town, extending internet service to previously unserved or underserved residences and businesses. Photo by Leila Hawken

November 16, 2022
By
Leila Hawken
If there are homes within the expanse of roads leading to the 250 homes, and a homeowner declines the Comcast service, then the cost saving to the project would result in an amount being placed into a fund that could help to extend service to the homes getting service but needing more line than the 300 feet allowed for.

SHARON — Seven years of effort to provide internet expansion throughout the town came to fruition on Thursday, Nov. 10, when residents gathered for a town meeting and resoundingly approved a proposal for a public-private partnership with Comcast.

The vote was 159 in favor and two opposed, with five abstentions.

By their action, voters approved entering into a contract with Comcast to provide $1.6 million as the town’s share of the cost of extending broadband internet along 28.5 miles of unserved roads to reach 250 unserved or underserved homes. Comcast has agreed to cover the balance of the project’s costs.

Resident Patricia Chamberlain was elected to serve as moderator of the town meeting that was held at Sharon Center School to accommodate an expected large turnout.

Several residents praised the Task Force for its persistence in bringing the project to a town meeting vote.

Residents who spoke in favor of the partnership focused on the necessity for all homes to have access to robust and reliable internet service.

To fund the town’s $1.6 million share of the partnership costs, voters approved the town’s plan to fund the first half as a project deposit ($800,000) using the town’s Undesignated Fund. The second half will be due when work is completed. That amount would be borrowed in the form of a bank loan, the loan amount to be reduced by any grant funding that might be identified by then.

Under the Comcast plan, Drew said, the company will offer to extend cable to homes. If a homeowner has a long driveway, then Comcast will extend the cable line up 300 feet of driveway. If a driveway is longer than that, then the homeowner would need to pay for the remainder of the distance.

If there are homes within the expanse of roads leading to the 250 homes, and a homeowner declines the Comcast service, then the cost saving to the project would result in an amount being placed into a fund that could help to extend service to the homes getting service but needing more line than the 300 feet allowed for.

Frontier Communications had provided a draft alternative plan in advance of the town meeting, a proposal that will need to be scrutinized and considered by various town boards and commissions.

While not opposing the Comcast plan, a few residents favored a pause to await Frontier’s proposal in order to compare the two before needing to vote on the Comcast plan. Comcast is offering high-speed XFinity hybrid fiber on the poles and coaxial cable from pole to home. Comcast’s service is a different technology from Frontier’s, Drew explained.

If the installation crew passes by a buildable parcel of land that might contain a home in the future, then Comcast will install a connector along the line, to enable an easy future service connection, Drew reported.

According to Drew, the next steps for the town, after the contract is signed in the coming days, will be to hire a contract performance manager to monitor the project’s progress, reporting to the Board of Selectmen and serving as a liaison between the project, homeowners and the Sharon Connect Task Force. Comcast will immediately begin applying for the necessary construction and pole permits to begin the network expansion.

Residents who have any questions about the project as it progresses are urged to email the Sharon Connect Task Force at sharonctconnect@gmail.com.