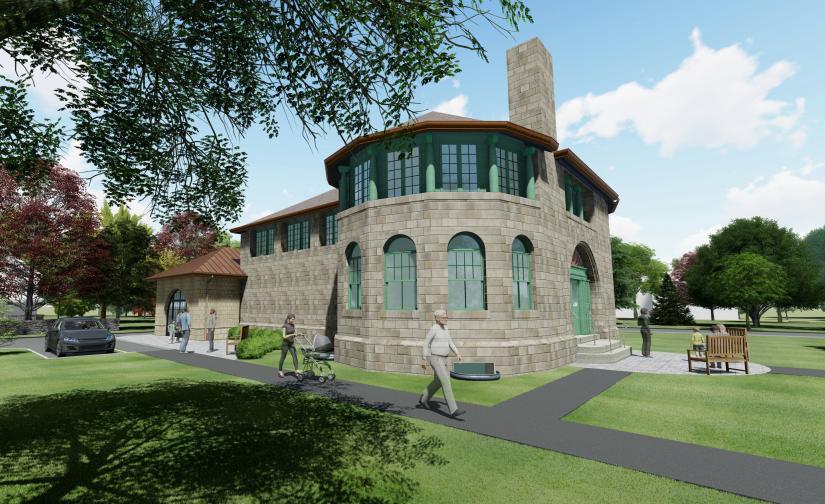 The Hotchkiss Library in Sharon shown in an architectural rendering. Rendering submitted

The long-anticipated project, first imagined in 1993, will bring the landmark library building into compliance with the Americans with Disabilities Act to enable full access for handicapped patrons.

Plans include extensive renovation and restoration of the historic interior.

When the project is completed, the library, built in 1891, will serve its 21st-century community by offering 21st-century amenities.

“Honoring the Past, Forging the Future” was the theme of the capital campaign that got underway in 2020 and concluded recently, having raised $3.5 million, compared to its initial goal of $1.5 million.

Tom Trowbridge, president of the library’s board, opened the June 16 press event with a welcome.

“Everything went smoothly,” Trowbridge said of the campaign, noting that the project earned ready approval from the Planning and Zoning Commission. He reminded listeners that there are two thrusts for the library’s fundraising: the capital project and the annual appeal to fund library operations.

“We blew by the initial goal of $1.5 million with the help of the board,” Lorna Edmundson, chairman of the Capital Campaign said, noting that by August 2021, $2.7 million had been received. While celebrating the ultimate success, she cautioned that construction can bring unforeseen costs brought by building complications or fluctuating prices for materials.

Celebrating that the campaign attracted 80 new donors, among them many new residents who moved to town during the COVID-19  pandemic, Edmundson said that if there is excess funding, the balance will be deposited into the library’s endowment fund.

David Moore, chairman of the Building Project Committee, described plans for the project, noting that the community’s generosity allowed the project to be expanded to include even more improvements to two floor levels.

Initially, Moore explained, a chairlift was planned to carry patrons up from the new rear entrance to the main level, but now that same chairlift will be able to descend to access a redesigned lower level as well.

Large windows will provide light to enhance the lower level, Moore said, making the area ideal for meetings and gatherings. That public area will be able to be used even when the library is closed, because it will have an independent entrance. The circulation desk will be moved from its current location.

Construction work is being done by Kronenberger and Sons, Middletown, Moore said. Work is expected to be completed during the winter, with final grading and planting slated for the spring. An outdoor reading area will be added to the north lawn.

“We’re expanding our reach in new ways,” said Gretchen Hachmeister, the library’s executive director, describing improvement and expansion of library services. With enhanced WiFi, virtual meetings will be possible. New laptops will be available, along with self-checkout of library materials.

“The interior spaces will be returned to the patrons,” Hachmeister said, referring to plans to relocate the office and staff workspaces to other areas within the library building.

A community-wide celebration is scheduled for Saturday, July 2, beginning at 11 a.m.