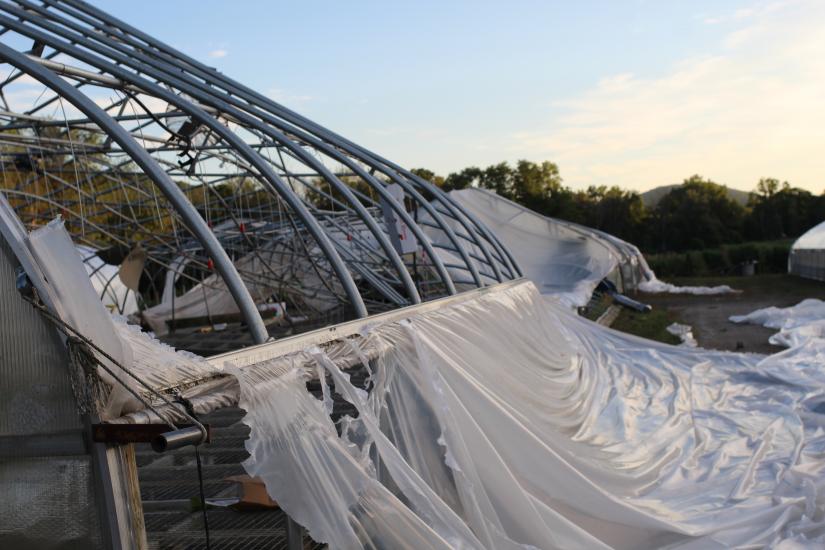 The plastic sheets that once covered the greenhouses at Paley’s Farm Market lay in tatters after being hit by a tornado on Sunday, Aug. 2. A major storm, Isaias, was also heading for the region Tuesday at press time. Photo by Hunter O. Lyle

SHARON — As the sun rose over Paley’s Farm Market on Route 343 in Sharon on Monday, Aug. 3, Chris Coon pulled into the parking lot of his business, where his employees were already working to clean up the aftermath of a tornado from the evening before.

Coon walked over and began surveying the damage with his workers, standing in front of a greenhouse that only yesterday had been fully functional. That greenhouse was now one of three that sat stripped of its plastic coverings, exposing bent metal frames.

“It sure looked to me like it came from Amenia,” Coon said. “There were some very strange clouds, almost like a horizontal cloud that you could see stuff going up.”

Coon, who owns the farm and market with his wife, Sarah Paley Coon (sister of farm founder and former owner Charlie Paley),  took shelter in a small opening between the shop and outside cooler when the weather turned on Sunday evening, Aug. 2, at about 6 p.m.

“It almost looked like someone was burning a huge brush pile” he said of the cloud.

A little before 6 p.m., Chris and Sarah were closing up the market buildings when they noticed the weather starting to pick up around them. Chris Coon said the wind continued to build, sending shingles, lawn chairs and debris whipping through the air.

While the two took cover to stay safe, Coon said it was over almost as soon as it started. He estimated that the tornado passed in less than a minute.

While no one was harmed, the severity of the wind caused significant damage to the market and the farm. It was the most damage the property has ever been hit with, estimated Coon, whose wife has worked with her brother since the farm’s inception more than 30 years ago. The Coons purchased the farm from founder Charlie Paley in 2019.

Along with the greenhouses, a large metal windmill lay toppled over in front of the market and a pile of mangled metal carts sat in back.

The roofs of the store and main greenhouse will need some light maintenance, Coon estimated.

Despite the damages, the Coons decided to open Paley’s Farm Market at 8 a.m. on Monday, just like they always do.

The word spread quickly on social media about the tornado and its impact on Sunday night. Coon said there has been an overwhelming amount of support, with many people contacting him and his wife and asking what they can do to help.

“We live in the greatest place on Earth, no question about it,” said Coon of what the community outreach means to him. “I’ve always thought this was a pretty special area. We’ve always tried to do anything we can to help in the community. When you see some of the stuff that happens in other areas of the country and world, it makes you realize how lucky you are to be here.”