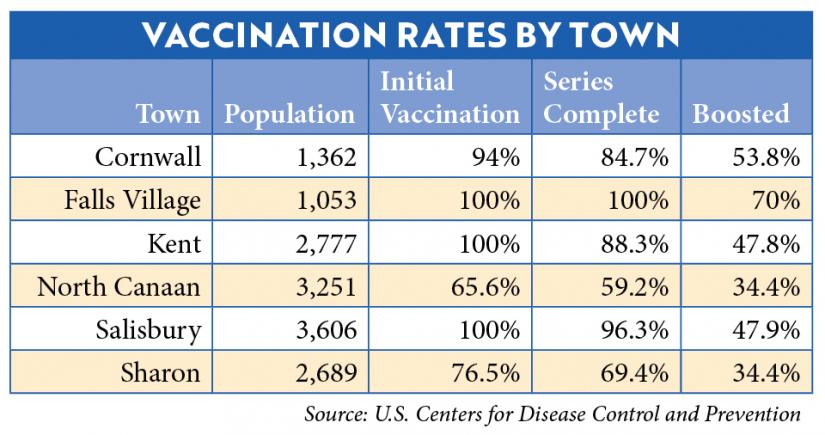 April 27, 2022
By
Debra A. Aleksinas
“We think that we’re probably undercounting by two-thirds the number of positive cases out there [due to the prevalence of home testing].” Dr. Mark Hirko, President of Sharon Hospital

SHARON — Citing concerns about rising COVID-19 cases and hospitalizations in the Northwest Corner, school and health care administrators said they are taking proactive measures to monitor the recent uptick, which they expect will climb in coming weeks following family gatherings during spring break and the Easter and Passover holidays.

“Litchfield County is the only county in Connecticut coming in at a high transmission rate of the virus right now. We’re hearing about a lot of it in the community,” said Bill Pond, administrator of Noble Horizons in Salisbury. “The challenge is the community coming in. Visitation is in full swing.”

In an April 20 interview, Dr. Mark Hirko, president of Sharon Hospital, reported that Litchfield County has experienced a “47 percent increase in positive cases within the past two weeks,” which he said is cause for concern.

Currently, Salisbury and Kent are the only two Northwest Corner communities listed in the red, or “high alert” zone on the Connecticut Department of Public Health’s color-coded map, which is updated every two weeks. As of April 14, one COVID-19 case was reported in Salisbury on week one, and seven cases on week two; In Kent, four positive cases were reported on week one, and seven cases the following week.

Hirko said while the state positivity rate, which topped 8% on April 22, is worrisome, he believes that the actual number of infections is much higher due to the prevalence of home testing. “We think that we’re probably undercounting by two-thirds the number of positive cases out there.”

Another indicator Hirko attributes to this most recent bump in community infection is the county’s lax vaccination rate.

Sharon Hospital is also experiencing a rise in COVID-19 patient admissions, following a statewide trend. “We are running a couple of patients per day that are admitted with COVID,” Hirko said. “We have one or two in here now, and the Emergency Department is seeing a slight bump up in the number of people coming in with respiratory symptoms and wanting to get tested.”

In response, the hospital has proactively mandated that all patient-facing employees wear N95 masks and eye protection, as was required at the height of the pandemic.  The hospital president also reported that absences among staff throughout the Nuvance system has spiked from an average of 30 or 35, to 66.

“We just came out of a meeting. The number has doubled,” he said.

Noble Horizons, which is celebrating its 50th anniversary this year, canceled a gala volunteer recognition party it had planned for April 28. While the decision was difficult, said Pond, the rising state positivity rate made it necessary.

In North Canaan, Kevin O’Connell, CEO of Geer Village, said he and his team have also been “a little cautious in the last few weeks” as a result of an uptick in infections among employees and the community.  Currently, he said, two staff members are sick with the virus, and several weeks ago a resident tested positive for COVID-19.

“The good news is that most of these cases are mild and result in brief illness but given how people who are frail react to this, we have to be very cautious. The current [state] infection rate is over 7.3 percent,” he said on April 20, “and the question will be, as it has in the past each time we have a surge, will the hospital admission rate and death rate actually climb? Those numbers usually lag behind the infection rate by a couple of weeks.”

Masking is mandatory among staff, and the public is urged to wear face coverings when visiting, said O’Connell. “We do get some pushback. Some people don’t believe in it, but it’s important to be aware that we are not out of the woods yet” with the pandemic, he said. “We will try all options so that people can see their loved ones.”

Tracking COVID-19 trends for Region One

Although the Region One School District dropped mask requirements in accordance with state guidance earlier this year, Superintendent Lisa Carter said she closely monitors and tracks emerging COVID-19 trends and patterns and stays in close communication with parents.

A few weeks ago she noticed a “microburst” of the coronavirus at the North Canaan school. “I worked with the principal and school nurse, and called the Torrington Area Health District,” the superintendent recalled. “If you have enough cases you want to let parents know and we all agreed” that was the proper course of action, said Carter.

Once the district-wide mask mandate was dropped, she said, it would be difficult to bring back, barring a severe rise in COVID-19 infections and hospitalizations.

“We watch Litchfield County, and as more cases crop up, I keep my eye on the schools and let the parents know what’s happening. It is spring break now,” she said on April 20, “so I will be sending a note out to all families to remind them that if their children are sick, they should take a test” before returning to school.

“Our parents and students have been very responsible, very careful,” Carter said. “With the exception of a couple of anomalies, we’ve had only a handful of positive cases in school in three years. That really is a tribute to this community.”