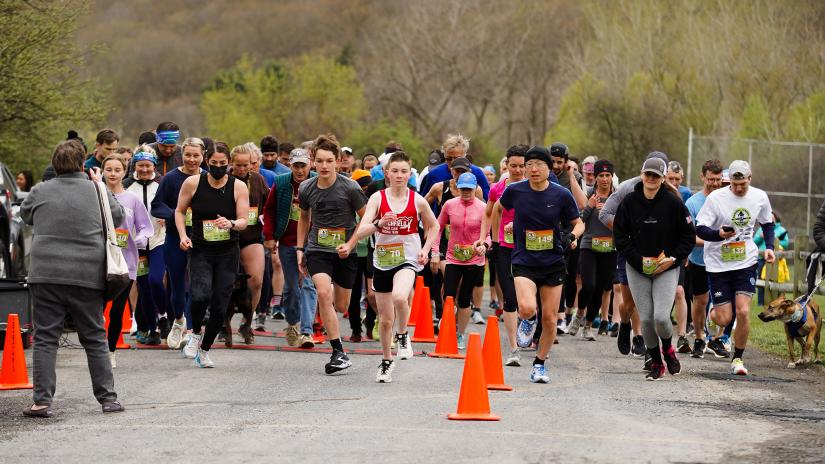 The Sharon Classic Road Race on May 7 attracted 126 participants to the new starting point at Veterans’ Field. Ben Schildgen, 13, was out front at the start and end of the race, coming in first. Photo by Hunter O. Lyle

SHARON ­— Minutes before the race began, contestants for the 37th running of the Sharon Classic Road Race on Saturday, May 7,  lined up in the entrance to Veterans’ Field in Sharon Valley. Although the route was new, the enthusiasm and level of competition of the runners stayed the same.

This race is an annual fundraiser for Sharon Day Care and traditionally starts on the Sharon Green. This year the course was changed.

Stacy Hudson, vice president of the Sharon Day Care board and coordinator of the Sharon Classic Road Race, said the board “had been talking about switching the course for the last couple years.

“We had talked about the facilities” at Veterans’ Field “and decided to give it a try.”

Leaving Veterans’ Field, the 126 registered runners took a left onto Sharon Valley Road, then a right onto Route 361 (Millerton Road) before making another left onto Mudge Pond Road. From there, the competitors continued to Mudge Pond before looping around and coming back the same way they came. All together, the course totaled about 5.35 miles.

Another factor runners had to face was the weather. According to the National Weather Service, winds in the area, which were especially noticeable when coming off the surface of Mudge Pond, reached nearly 25 miles per hour during the race. Some contestants compared it to running while wearing a parachute.

Starting promptly at 10:15 a.m., it took just over 30 minutes for the first contestant to cross the finish line: Ben Schildgen, a 13-year-old from Litchfield who finished with a time of 30 minutes 8 seconds.

“It’s really funny,” said Schildgen of beating his older competitors, “but when I’m running I don’t think like ‘oh this guy is 37 or 25.’ It’s just another competition.”

Less than 10 minutes later, Jenna Schildgen, Ben’s mother, finished as the first female contestant, earning that title with a time of  36:22.

“It was wonderful because everyone was so encouraging,” said Jenna Schildgen. “Everyone is cheering for each other as you go, so races like that are super fun.”