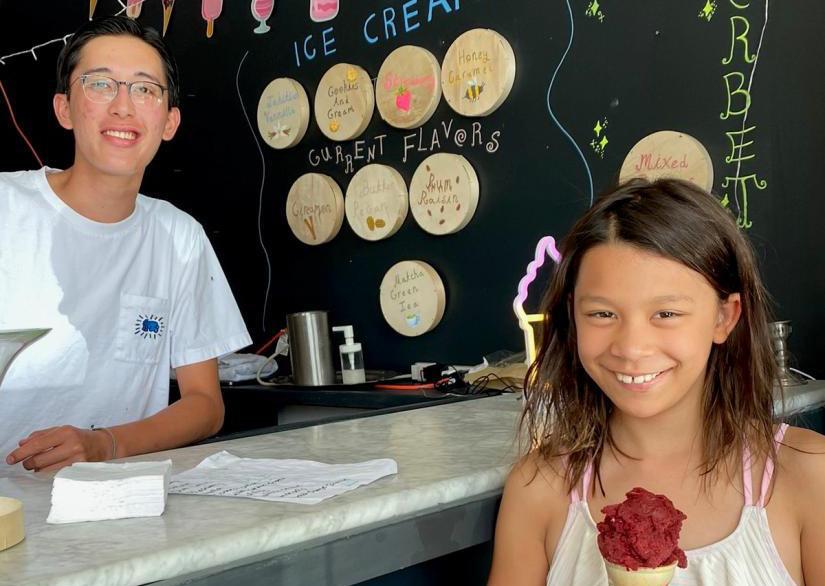 Smiles all around at the new Le Gamin Ice Cream Shop in Sharon. Keeping up with the demand on Sunday, Aug. 7, clerk William Iorio had just dished out a blackberry cone to Ella Kotnik, 9, of Sharon. Photo by Leila Hawken

SHARON — That everyone is said to love the new little ice cream shop in town is a sure sign that it will succeed. Le Gamin Ice Cream Shop is adjacent to Le Gamin restaurant, offering the perfect way to top off delicious French fare with something sweet and lusciously creamy.

Or, the little shop has its own entrance in case treat-seekers want to skip dining and move right to dessert. More good news is that the shop which opened on Friday, July 9, is open seven days a week from 1 p.m. to 9 p.m.

In between customers, clerk Alecz Kovacs, a recent Housatonic Valley Regional High School graduate serving behind the counter, described flavors that include ice cream and fruit sorbets, during an interview on Thursday, Aug. 4. At any one time there are eight or nine ice cream flavors and perhaps two to four sorbets, Kovacs said.

Le Gamin owner Robert Arbor said that he now obtains his ice cream from Jane’s Ice Cream company in Kingston, N.Y., and is no longer driving to Brooklyn, N.Y., to pick it up from Mont Blanc, his city source. Rich and creamy in both standard and imaginative flavors, Jane’s ice cream is made in small batches using hormone-free cream from local cows and natural local ingredients. The fruit sorbets are completely dairy-free. And if nuts are one of the ingredients, Jane’s produces the nut varieties at the end of a day’s run just before the equipment is thoroughly cleaned in preparation for the next day’s production.

“People say it’s like a relief to finally have an ice cream store, and one of good quality,” Kovacs said.

Cameron Smith of Sharon stepped through the door indicating that he was visiting the ice cream shop for the first time. “I’m excited,” Smith said as he considered the various flavors including Butter Pecan, before settling on Rum Raisin, a single scoop on a cone.

The conversation over the cone logically turned to golf with Smith commenting that he has won the Sharon Golf Course championship for the 20th time, since he began competing in 1966. Kovacs, too, has distinguished himself on the links, indicating that he has earned a golf scholarship to attend Palm Beach State College in Florida this fall.