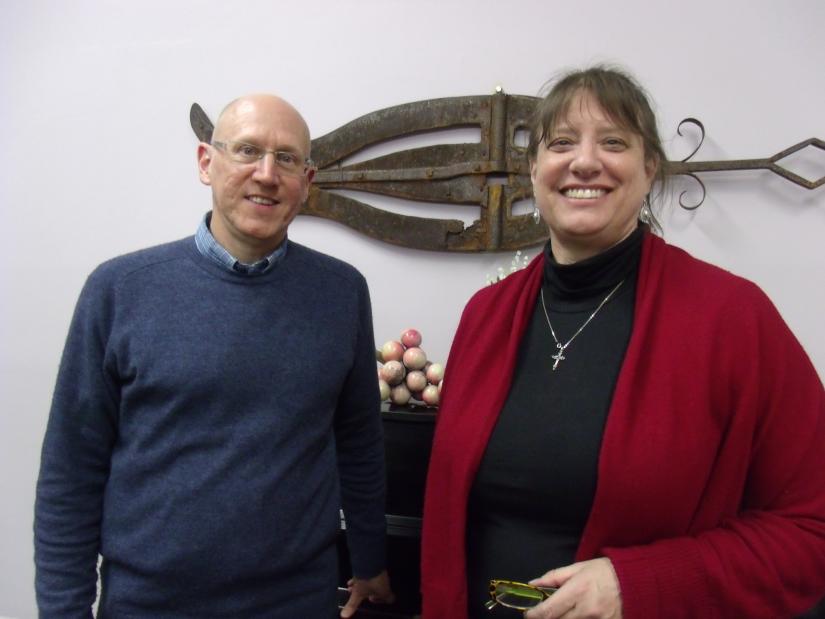 The Rev. Bob Keay of Sharon Congregational Church, left, and the Rev. Peg Laemmel of Sharon Methodist Church presented a potluck dinner and a talk on  biblical archaeology. Photo by Leila Hawken

SHARON — The first in a series of three planned Lenten season programs drew a large audience to a potluck supper and a talk on biblical archeology at the Sharon Congregational Church on Thursday, March 12.

The free series is itself a first, with the organizers hoping it will continue in future years (although it’s not yet known whether the series will continue this year, due to COVID-19 concerns).

Bob Slagel offered piping hot corn chowder and biscuits for the more than 30 residents who attended. As it was a pot luck, salad sides and desserts were in ample supply.

The program for the evening, “Archeology and Jesus: How to Build a Kingdom,” was presented by the Rev. Robert Keay, pastor of the Sharon Congregational Church.

Speaking of the Lenten series, Keay said, “We like to do events that bring together all the churches. Although we meet in different buildings, we are one body.”

Next in the series, set for March 18, was to be a potluck and a lecture at the Christ Church Episcopal, with a presentation by the Rev. Dr. Martha Tucker titled “A Pilgrimage in the Wilderness of the Holy Land.” It is not yet known if the talk will be rescheduled and when.

The third and final event in the series was to be held at the Sharon Methodist Church on Thursday, March 26, with a talk by the Rev. Peg Laemmel, titled “Methodism in America.”

Reflecting on the series, Laemmel commented, “We are all Christians; we all have a common denominator.”

She added that the series brings a fellowship of community.

Focusing on the reigns of the four kings in the Herodian Dynasty, between 37 B.C. and 66 A.D., Keay zeroed in on the accomplishments of Herod the Great, so named for his prowess as a builder, designer, architect and landscaper on a large scale. During his time, he built cities, grand palaces, temples, arenas and massive aqueducts, and he rebuilt the temple in Jerusalem.

“He did build a kingdom, but it is crumbling,” Keay said, showing photographs of archaeological sites where only ruins remain.

Jesus, too, was a kingdom builder, Keay asserted, and his kingdom has been longer lasting, not of stone, but of influence. Jesus left behind not rubble, but teachings and examples.