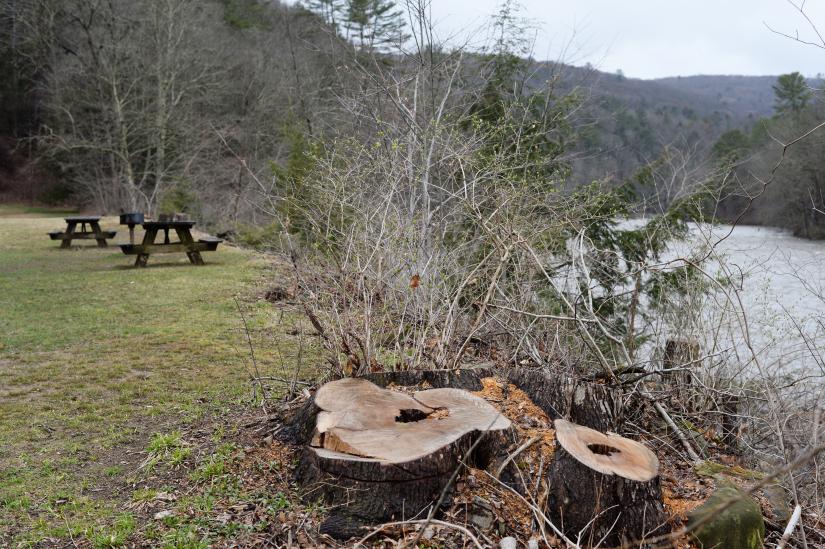 Tree stumps remain along the bank of the Housatonic River adjacent to the picnic area at Housatonic Meadows State Park. Photo by John Coston

SHARON — Legislation that calls for a new level of oversight over the Department of Energy and Environmental Protection’s (DEEP) management of parks and campgrounds is moving ahead in the General Assembly, initiated by last winter’s controversial tree-cutting at Housatonic Meadows State Park.

Sen. Craig Miner’s (R-30) proposal, Senate Bill No. 117, has been voted favorably out of the Environment Committee and has bipartisan support, Miner said. It’s not known how the bill might be amended on its way out of the Senate to the House, but Miner said, “It’s highly unusual for an agency to have this kind of oversight.”

Miner, who is the ranking member on the Environment Committee, said DEEP has pledged to meet with the committee to discuss the bill’s language on April 15. Besides any outcome from that meeting, Miner also envisions that the bill could face more changes, but he said he expects that it will pass both chambers.

“We are keen to pass a bill,” Rep. Maria Horn (D-64) said at a March 15 virtual public hearing held by DEEP. “So that arborists get a chance to weigh in.”

SB 117 calls for DEEP to consult with an arborist before removing a tree on the grounds that it presents a hazard. The removal last winter of about 100 oak and pine trees in the scenic, riverside park that is a popular recreational destination drew immediate protests from local residents. Many of them were primed to question the state’s decision-making based on their own expert credentials as arborists, tree wardens, horticulturalists and wildlife experts.

Last fall, the park supervisor at Housatonic had marked trees as hazardous using guidelines established by the agency. According to DEEP policy, there was no public notice or outreach, and a state contractor began cutting the trees in early November.

A few days later, as a result of public outcry, the work stopped. It resumed again in January despite a peaceful protest at the site.

“There’s no way to unwind the damage,” Miner said in an interview, “and my position still is that legislation is needed to protect against the same kind of activity from happening again.”

In its current form, SB 117 imposes various controls on DEEP. For one, before removing or pruning five or more so-called hazardous trees per acre or removing a tree that is determined to be 75 years or older or a species of special concern or a threatened or endangered species, DEEP must consult with an arborist not employed by or under contract by the state.

The bill further would require a sign posted on trees slated for removal. Anyone who objects would have to file a petition, which would be followed by a public hearing. Eventually the DEEP commissioner would be required to provide notice of the commissioner’s decision to anyone with an interest in the petition.

“This has costs associated with it,” Horn said. “We need to put a price tag on it,” she added, referring to a fiscal analysis underway in Hartford.

The bill also deals with situations when a tree is determined to be an immediate public hazard by an arborist, requiring the arborist to consider the proximity of the tree to the public, the feasibility of pruning in lieu of removal and the age and history of the tree and to determine social or scenic value. The bill also calls for tree planting to replace removed trees.

“These trees were carelessly and, in most cases, erroneously targeted for removal by DEEP. This was a travesty,” said Bruce Bennett, a Connecticut-licensed arborist and the tree warden for the town of Kent, who spoke at the March 15 public hearing.

Bennett’s input at the hearing was made as a representative of Housatonic Meadows Preservation Action (HMPA), a group of concerned citizens formed to change DEEP’s practices when it comes to designating hazardous trees, and among other things to ensure that there is a suitable remediation plan.

“How can we do better?” asked Eric Ott, director of engineering and field support services at DEEP, who also spoke at the hearing.

Up to now, DEEP has acted as the sole decision-maker when a tree is identified as a public hazard, and the decision to remove a tree typically is left to park managers, who lack credentials as arborists or tree wardens. DEEP also lacks a process to review such park manager decision-making.

The HMPA group also seeks remediation to the Housatonic Meadows grounds and is working with DEEP to propose a plan of replanting along with other restoration work.

Katherine Freygang, an ecologist and environmental educator in Cornwall, is a member of HMPA and leads restoration planning for the group comprised of more than a dozen people, including DEEP representatives. It has met with DEEP on the Housatonic Meadows site to air concerns and discuss solutions.

The scope of the restoration that HMPA envisions is comprehensive. It considers restoration of the riverbank, including planting of deep-rooted trees for stabilization, new plantings of native trees, shrubs and ground covers along with removal of invasive species.

HMPA also is taking wildlife habitats, recreational amenities and educational outreach into consideration. Freygang commented that the park provides educational value to the region, along with economic value and what she called its greatest commodity: recreation.

“Housatonic Meadows is such an environmental representation of our area,” Freygang said. “We are committed to keeping it very healthy.”