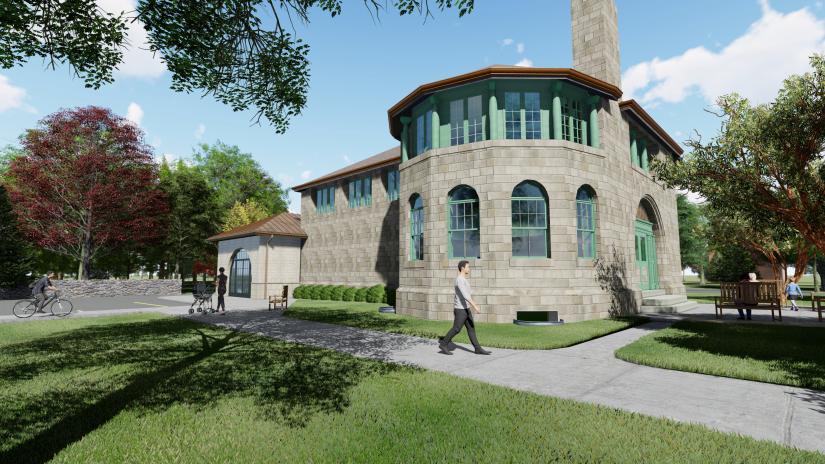 SHARON — Upgrades and an expansion of the 128-year-old Hotchkiss Library of Sharon have been stymied for decades as the library board sought approvals from various town boards and commissions.

Two of the three approvals are now in hand, with the unanimous approval at the Monday, March 15, special meeting of the Zoning Board of Appeals (ZBA).

The addition to the rear of the library building, a $2.2 million project, will add approximately 1,600 square feet and bring the library into compliance with the Americans with Disabilities Act (ADA), providing access and two ADA-compliant restrooms, said Executive Director Gretchen Hachmeister in an interview on Tuesday, March 23.

The library was donated to the town by Maria Hotchkiss and is on a tiny piece of land. The variance approves a 16-foot rear setback and it will allow a small amount of room for the addition’s gutter system.

Four feet of variance will be allowed to accommodate the site plan provided by the architects, QA+M Architecture of Farmington, Conn. According to Ken McCoy, the QA+M representative at the ZBA meeting, every effort has been made to minimize any impact on neighboring properties.

The ZBA approval means that the application can return to consideration by the Planning and Zoning Commission (P&Z) at their regular meeting in late April, the final step in the approval process.

If approved by the P&Z, groundbreaking could occur in the summer, anticipating that the addition could be closed in before the colder weather sets in, Hachmeister said. Interior work could be done during the winter months.

The ADA-compliant addition will be added to the rear of the library. Plans include a ground-level entrance with no ramp involved. Library patrons will be able to enter through an arched entrance at ground level and proceed to a lift that will bring them upstairs, Hachmeister explained.

The arched entrance will be made of fabricated stone that visually matches the existing historic stonework. Hachmeister noted that best current historic preservation practices recommend working with materials that are similar to the original.

In addition to providing access, the new space will mean that all staff functions will be accommodated in that new location, freeing space in the book stacks for library patrons. There will be additional space for children and community activities, as well as enhanced internet access.