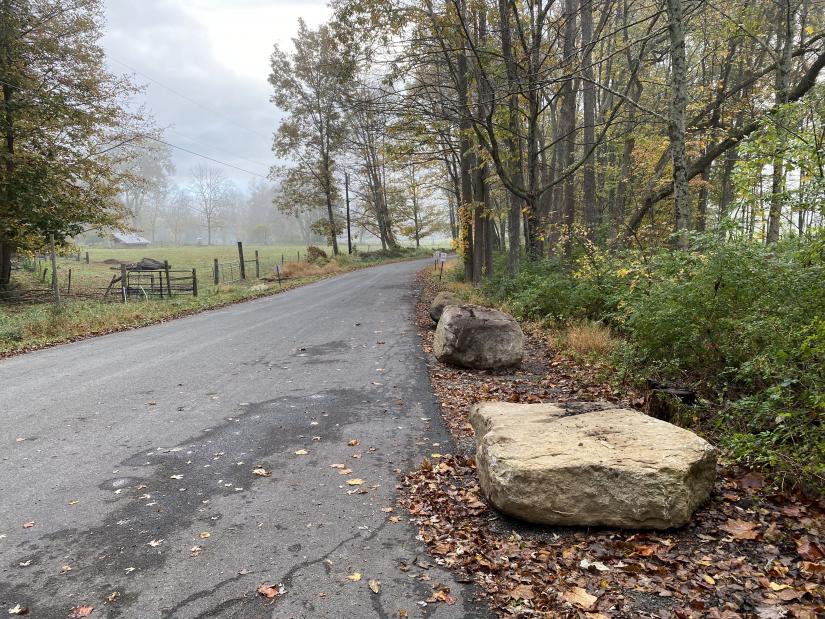 Property owners on River and Dawn Hill Roads in Sharon are already concerned about an excess of cars as visitors come to enjoy the Appalachian Trail and the Housatonic River. A new trail being planned for Dawn Hill  is raising concerns about an increase in parking problems. Photo by Cynthia Hochswender

Concerns in Sharon about too many visitors to river and trails

SHARON — Even before COVID-19, towns on the Housatonic River have had problems with visitors from New York and from Connecticut cities coming to the Northwest Corner for picnics along the shore and swims in the river.

In Kent, for years there have been concerns about overflow cars parked along narrow roads; about loud music played by visitors; and about trash left along the shores of a river that is meticulously cared for by local volunteers and organizations such as the Housatonic Valley Association and the Housatonic River Commission.

The land on either side of the river is owned, largely, by a power generation company called FirstLight that produces hydropower from dams along the river in Falls Village/Salisbury; Kent at Bull’s Bridge; and eight other sites in Connecticut and six sites in Massachusetts.

The power company advertises the recreational areas at its hydropower projects on its website. There are also numerous unofficial websites that encourage city dwellers to come up and enjoy the waterfalls.

FirstLight and the Connecticut State Police have worked with the town of Kent to try and reduce the overcrowding and trash at Bull’s Bridge and other nearby access points.

Since the COVID-19 pandemic, the Great Falls in Falls Village and Salisbury have also become a magnet for out-of-town visitors, who swim in what appears to be a fairly placid waterfall there; almost every year there is one or more drownings  and usually several water rescues in Kent and Falls Village at or near the falls.

There has also been an overflow of visitors to other spots along the river, including a secluded section of Sharon on River Road. The river is easily seen from the concrete bridge on Route 4 that divides Sharon from Cornwall. In the past year, this scenic and bucolic one-lane road has also become swollen with parked cars of visitors who have come to enjoy the river and  the Appalachian Trail (AT) entry point there.

The cars are not only an irritant for property owners who live on the road, which fronts the river; the visitors also frequently block driveways and, sometimes, access in and out of River Road. The cars also narrow the road to the point where it’s hard for emergency vehicles to safely navigate it.

Although unhappy with the situation, River Road residents did not lodge any formal complaints.

Petition asks for input and information

Residents of both River and Dawn Hill Roads have signed a petition with their concerns about plans by the Sharon Land Trust to purchase a privately owned property on Dawn Hill Road. The state of Connecticut is expected to fund the purchase, requiring that the new conservation area also be accessible for public recreation.

At a meeting of the selectmen at Town Hall on Tuesday, Oct. 12, the petitioners said they fear that the new public access and recreational area will exacerbate an already-bad situation, caused by an existing public recreational area at the base of Dawn Hill Road that runs along the Housatonic River and connects with the Appalachian Trail.

They claim that on any given weekend, as many as 20 cars park in and around the existing public recreational area, often blocking the road and driveways. Unable to get relief from the current conditions, residents are concerned that the addition of a second public access recreational area, so close to the AT and the river, will make the situation worse.

The petition stresses that the road residents “support efforts to preserve open and green space.”

But, it says, “We strongly feel that before this new proposed recreational area is confirmed, a formal feasibility study of its environmental impact and traffic implications for the 25 homes and more than 60 Sharon residents that live on River and Dawn Hill Roads needs to be conducted.” They claim that the Land Trust has not shared any information on plans for the property.

The selectmen expressed sympathy with the concerns of the property owners, while noting that they have no jurisdiction over a state-funded plan. However, they said they would speak to the Land Trust and ask their representatives to meet with the River Road residents.

The Land Trust has been invited to respond in detail in our issue of Oct. 28.