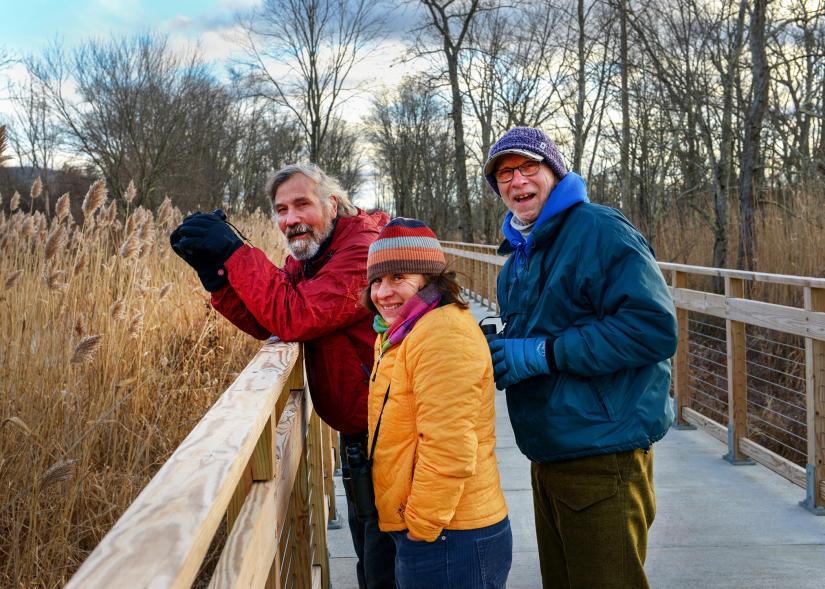 Counting Mallard and Black Ducks on the Rail Trail in Millerton for the Trixie Strauss Bird Count were, from left to right, Art Gingert, Mary King and Joe Gwazdauskas. Photo by Don Heiny

SHARON—It was a day for the birds.

Continuing a 122-year tradition, small groups of birders spread out in a 15-mile radius on Sunday, Dec. 19, solely for the purpose of counting birds during Sharon Audubon Center’s annual Trixie Strauss Bird Count. Judging from the results posted by the teams, there was no shortage of avian sightings or of surprises.

The early-winter event, held on a pleasantly mild but blustery day, revealed great numbers of American Robins, Eastern Bluebirds and Bald Eagles, as well as some uncommon species to this region in December, including the small-bodied Cackling Goose, shaggy-headed Red-breasted Mergansers and several elusive Gray Catbirds and Northern Mockingbirds.

“This year my team covered a new territory providing us with some exploration and excitement around different areas,” reported Zach Adams, compiler of the Lakeville-Sharon count. “By 9 a.m. we had seen over 20 species, including some unusual species.

“With this excitement to start the day, we enjoyed our full day of birding sporting a few highlights including four Hermit Thrushes,” Adams said. He noted that it is often difficult to locate just one in the entire count area. Adult Hermit Thrushes are typically found hopping on the forest floor while foraging among the leaf litter.

“Open water is not always a given on the Christmas Bird Count, but this year, all the ponds were open and hosting large flocks of ducks and geese including over 300 Ring-necked Ducks on Wononpakook and over 250 Common Mergansers on Mudge Pond,” George Wallace said.

In addition, the route captains identified six Bald Eagles soaring at once over Long Pond.

“It’s amazing to consider the incredible recovery that Bald Eagles have made, from rare to common in just a few decades,” noted Wallace.

“Particularly surprising to us were the four Gray Catbirds we found, three of which were in the vicinity of the Twin Oaks Preserve. While recorded nearly annually on the count, we are at the northern limit of their wintering range, and one has to wonder how they fare in these cold conditions, especially given that most Gray Catbirds prefer to winter along the Gulf of Mexico and into the Caribbean and Central America.”

In all, the North Sharon Route team saw a whopping 2,369 birds of 49 species.

“I didn’t get some of my usuals, like Cedar Waxwings, Ring-neck Pheasant, Golden-crowned Kinglet or Bald Eagle, but I did see two Northern Harriers, which was super cool, as well as a ton of American Robins, which seemed to be everywhere.” At one point, she noted, they kept flying overhead nonstop. “I counted about 148 of them, but I’m sure there were more.”

Another “fun surprise,” she said, was the discovery of a large flock of Red-winged Blackbirds. “There had to be about 150 of them, with about 40 Crown-headed Cowbirds mixed in,” as well as a Fox Sparrow. Miller said she is especially fond of Bluebirds, and spotted 19 of them in her territory. “People always think they are not around in the winter, but I see them every year.”

Bethany Sheffer, captain of the South Sharon route, was joined by participants Cheri Johnson and her son, Jonas Johnson, Joshua Harkness and Laura Marris. Sheffer, a volunteer coordinator and naturalist at Sharon Audubon, said her team found 33 species and were surprised by the presence of three Northern Mockingbirds.

“This species isn’t traditionally found on this region’s count, which begs us to question why those individuals didn’t migrate to the southern United States,” noted Sheffer. Also to their surprise, she said, the team counted 427 American Robins, many of which were congregating near fruiting woody plants such as Winterberry, Asiatic Bittersweet and Multiflora Rose.

The latter two plants, according to the naturalist, are nonnative invasive species, which prompted the group to ask whether their increasing presence across the landscape is prompting larger numbers of certain species — such as American Robins and Northern Mockingbirds — to remain during the winter months instead of moving south.

“We were excited to see a Northern Harrier exercising its ghost-like flight behavior at the entrance of Sharon Land Trust’s Benton Hill Preserve,” Sheffer said. “This species often hunts for small rodent prey by using its long wings to soar just above the tops of grasses in open habitats. It is also a species that visits northwest Connecticut and New York State from more northern territories during the wintertime, frequenting expansive open habitats.”

An exciting end to the South Sharon team’s bird count was marked by the discovery of 16 Red-tailed Hawks that were predominantly perched in large trees overlooking open fields and farmlands, the birds’ preferred habitat.

“It was fun to see a blurry shape in the distance and congratulate ourselves when we correctly called it as a Perched Red-tail — verifying with our binoculars,” Sheffer added.

The Trixie Strauss Christmas Bird Count takes place within a 15-mile circle with its center at The Hotchkiss School in Lakeville and covers some of the prime birding areas in Sharon, Salisbury, Falls Village, Amenia and North East/Millerton.

Teams of experienced birders and backyard bird enthusiasts from all over Connecticut and the country take part in the annual Christmas Bird Count, and the numbers are compiled and reported to help better understand flock formations and migrations.