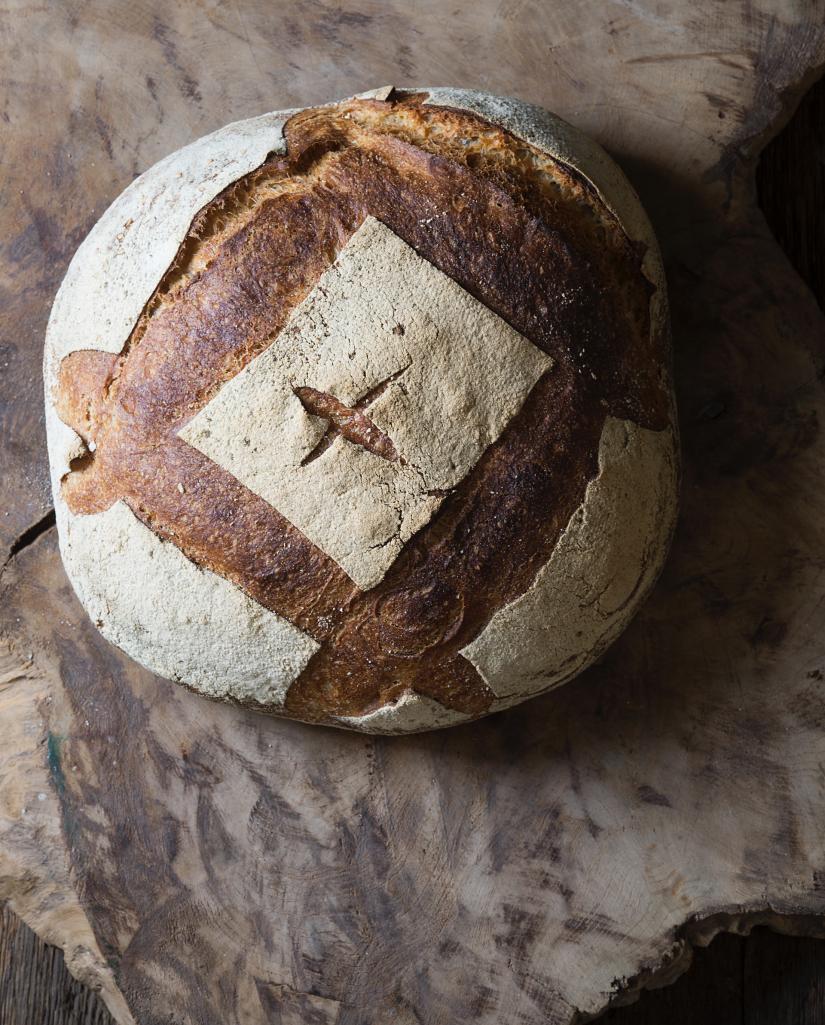 Baking bread with the master, in a Zoom talk

SHARON — Dan Leader is going to do a Zoom demonstration of how to make sourdough starter and a simple sourdough bread. This is a little bit like having Mozart come to your house to show you how to play “Twinkle, Twinkle, Little Star.”

Leader is the baker/owner/founder of Bread Alone, one of the only bakeries to offer artisanal breads at grocery stores throughout the Tri-state region and New York City.

There are also Bread Alone restaurants in nearby New York state in Boiceville, Rhinebeck, Woodstock and Kingston, serving sandwiches and baked goods, all for take-out these days.

The breads have been selling at a super-fast rate, Leader said.

“We can’t bake enough bread,” he said in a phone interview last week. “We’ve been at full capacity for two months. People are buying all their bread in stores now that they’re not going to restaurants.”

And of course many people are either teaching themselves to bake bread while in quarantine or are dusting off forgotten skills from years ago. As a result, it’s very difficult to find yeast and flour (especially coveted bags of King Arthur products).

Leader’s general message in his Zoom talk will be to relax a little; it’s going to work out. Which is comforting to hear from the man whose new book, “Living Bread,” seems intimidatingly scientific at first glance.

“Living Bread” is the reason why Leader is offering his services for what he’s calling “Sourdough 101” online. The talk and demonstration (on Friday, May 29, at 7 p.m.) is a fundraiser for the Hotchkiss Library of Sharon, a way to make up for funds that will not be collected this year at the annual book signing, which will not take place because of COVID-19 concerns.

The library has lined up several authors to do Zoom talks. There is a fee to participate. Books can be ordered (and signed) through the library website. To sign up, go to the library website at www.hotchkisslibrary.org and click on “events” and then “Virtual Book Signing 2.0 —  Book Talk With Daniel Leader.”

Leader describes himself as a “back-door baker,” and he begins the book by talking about how he learned to bake bread by wandering around France and knocking on the back doors of bakeries. He’d get pulled in off the street and put to work right away.

Despite what he feels is his non-academic background, “Living Bread” presents recipes in an intimidating format — which, once Leader explains it, is actually quite simple.

Bakers have their own shorthand language for adapting recipes; they use a “baker’s percent” in which they throw out a number for the amount of flour used, the amount of salt and water, the time it needs to rise, all the basics of making bread. This is the language that Leader uses in his book.

He also offers metric measurements for the recipes; again, this seems intimidating until you try using a scale, at which point you realize it’s much simpler than cups and tablespoons.

The book is a sort of travel guide to bakeries in Europe that Leader has known and loved. He interviews bakers about their best breads and how they do their work, often using recipes and sourdough starters that have been handed down through the generations.

Leader is drawn more to denser breads with a tighter cell structure, as opposed to the airy artisan bread with lots of holes that he says he sees so much of on social media. These lighter breads are generally made with the newer technique of stretching and folding (or “lamination”) than with kneading (by hand or with a mixer).

“When you knead you don’t get those nooks and crannies,” Leader said. “Esthetically that kind of bread is very appealing, but if you showed it to bakers in, for example, northern Italy or parts of Germany, they’d see those holes as a flaw.

“People like to put butter on their bread, or make sandwiches. It gets messy when you have a lot of holes.”

The photos in “Living Bread” make a compelling case for the aesthetic appeal of a denser bread. They were taken by Joerg Lehmann, a food photographer who traveled around Europe capturing the breads (and bakers) that Leader writes about in the book with his co-author, Lauren Chattman.

For those who are feeling restless in quarantine, this book not only offers a way to pass the hours (by learning to bake with bakers’ percents); a master class in classic bread technique taught by someone who didn’t learn it in an academic setting; and a beautiful travelogue of western Europe.

For neophyte bakers who feel frustrated at not being able to find their favorite flour brand or commercial yeast, Leader says not to worry about what flour you use for your sourdough starter. Save the best flour for making bread. His book offers information about large mills that can ship artisan flour to you. To learn about an artisan flour mill here in the Tri-state region, see the article in this week’s Compass arts and entertainment section about Wild Hive Farm Community Grain Project in Clinton Corners, N.Y.