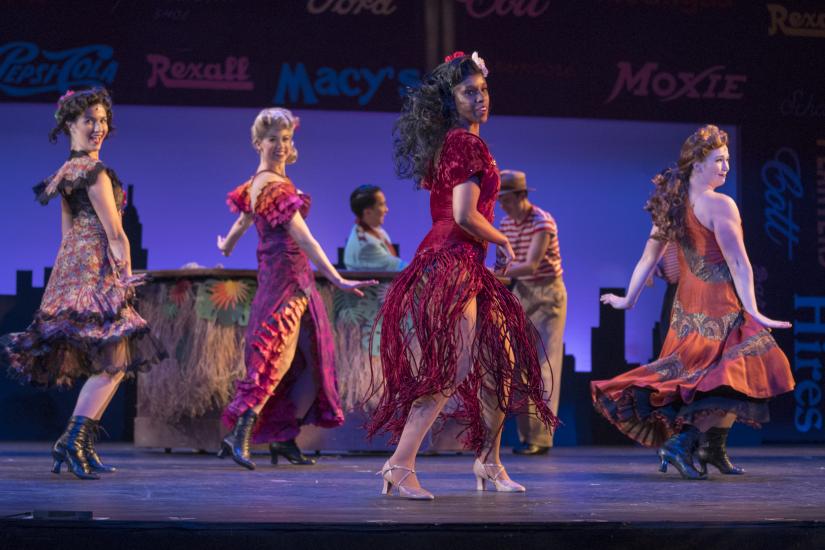 SHARON — Sharon Playhouse’s joyous production of the 1950 “Guys and Dolls”, one of the greatest American musicals of all time, opened Friday evening  with the exuberance of a Broadway premier at a jam-packed Bobbie Olsen Theater.  It’s the first full production staged in Sharon’s updated, old summer-stock barn since the pandemic, which gave the evening a special buzz.  .  And the show’s score by Frank Loesser, one of the all-time great musical comedy composers and lyricists, is chockablock with some off the most popular songs that came from Broadway — delivered with vocal authority by a sparkling cast. But what really distinguishes Sharon Playhouse’s production is the tap choreography by director Justin Boccitto, who renders this Broadway classic into the non-stop, vivacious musical fable it was meant to endure as.

Based on a short story and characters created by Damon Runyon, “Guys and Dolls”, set in late 1940s Times Square,  weaves a pair of  boy-meets-girl, girl(finally)-gets-boy stories with the foibles of lovable low-lifes grifting from one crap game to the next. Sexuality here is innocent (well, maybe a little naughty); criminality is feckless. In brief, small-time crap-game organizer Nathan Detroit  (Robert Anthony Jones) in debt makes a wager he thinks he can’t lose with big-time gambler Sky Masterson  (C.K. Edwards), The bet — to get a date with Sarah Brown (Amanda Lea Lavergne), the goody two-shoes who runs the local Bible-thumping mission house.  Nathan’s fiance of 14 years, burlesque showgirl Adelaide (Lauralyn McClelland) befriends Sarah, who admits she’s fallen for studly Sky.  Adelaide is ready to give up on wedding the fear-marrying Nathan.  Plot twists later, when a crapgame occurs in the mission, truths get revealed, true  feelings prevail, and — you guessed it —  the men reform and everyone lives happily ever after.

Under Boccito’s clever direction, it all unfolds charmingly and giddily. Loesser’s hit tunes  just keep on coming, but this time tap gets integrated with the score unlike this reviewer has ever  seen. The overture and opening sequence signals it all, with the ensemble in black and white silhouette moving in Times Square streetlife.  When the curtain drops the full chorus is revealed in wittily-designed technicolor MGM musical costumes. The show takes off; airborne, it soars.

Loesser’s melodies range from romantic ballads to comic diddies.  Ms. Laverge as Sarah, well known to Playhouse audiences for “Crazy for You” and “Anything Goes”,  gets the romantic gems like “I’ll Know” and “If I Were a Bell” , which she delivers with sopranic perfection.  Ms. McClelland as Adelaide gets Loesser’s comic plums: “Bushel and a Peck”, “Adelaide’s Lament (“a person could develop a cold”) and “Take Back Your Mink”. Her squeaky, nasal, vocal interpretation is as priceless as Faith Prince’s who played the role in the last Broadway revival, it’s that good.

Boccitto’s tap routines are most extravagant in the show’s title number, but even more impressive is the sequence of “The Crapshooter’s Dance’’, a knockout ensemble tap, which segues into Sky’s “Luck Be A Lady”. The showstopper, of course, is “Sit Down, You’re Rockin’ the Boat” here led by an endearing Joshua Spencer who redefines the role of Nicely, Nicely (made timeless by Stubby Kaye) with a very funny Dom Giovanni as his sidekick Benny Southstreet.

Sharon Playhouse’s “Guys and Dolls”, from beginning to end, is one big smile, something  we all could use these days.

Dan Dwyer, the U.S. reviewer for the German magazine Blickpunkt Musicale, is a member of the Board of the Lakeville Journal Foundation.