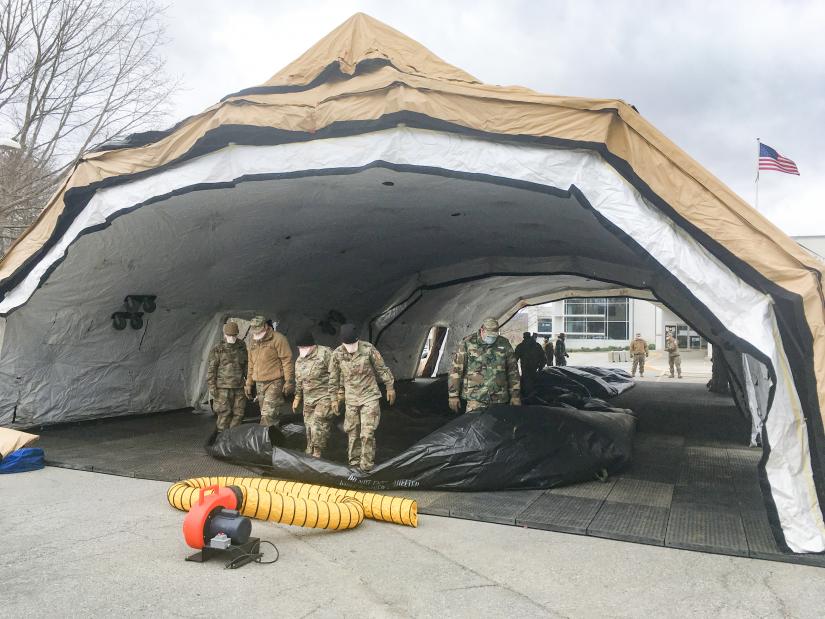 A field hospital owned by the state Department of Public Health was constructed in the entry to Sharon Hospital on Friday by members of the Connecticut militia, under the guidance of Daniel Murphy, director of the New England Disaster Training Center. Photo by Cynthia Hochswender

The truth behind the Sharon Hospital rumors

SHARON — The rumors that Sharon Hospital will become an overflow facility for Norwalk Hospital are not exactly true. As is often the case with rumors, though, there are some true elements in the story.

For the past four or five weeks, said Dr. Mark Hirko in a phone interview from his car late on Thursday afternoon, April 8, Sharon Hospital has been sending its most acutely ill COVID-19 positive patients to the other six hospitals in the Nuvance Health/Health Quest network.

Hirko is the head of Sharon Hospital, which is now part of the nonprofit Health Quest, based in Dutchess County; the other three Health Quest hospitals are all in New York state (Northern Dutchess, Vassar Brothers and Putnam).

Health Quest is part of Nuvance, which also has the Western Connecticut Health Network, made up of three hospitals in Connecticut: Danbury, Norwalk and New Milford.

For the past four or five weeks, Hirko said, critically ill COVID-positive patients have been transferred to Danbury, Vassar Brothers and Norwalk.

“These are Level 2 trauma centers that have the ICUs and the instrumentation and back-up to handle these severely critically ill patients.”

Hirko said that Sharon has had one or two patients every week in recent weeks who required intubation and transfer.

The senior leadership in the health care system has been meeting constantly, Hirko said, to assess the situation. They feel  that the next two weeks will be a COVID-19 peak in Connecticut and in Litchfield County, which he said has the fourth highest number of COVID-19 positive patients in the state.

The assumption is that, more or less, Connecticut and Litchfield County are about two weeks behind New York City.

At the moment, Hirko said, the hospital is well-prepared to manage confirmed cases of COVID-19 in specialized areas of isolation. The health system defers, he said, to the Connecticut and New York departments of health regarding the numbers of confirmed cases and their origins.

Who comes to Sharon

Some of the patients who are not acutely ill or who are recovering can return from those other hospitals to Sharon.

“Some 85 to 95% of people will survive,” Hirko said. “They get extubated [that is, they are no longer intubated] but they are not healthy enough to go home. The larger hospitals are now starting to fill up with patients who don’t need the high-end care anymore; they now need a place to convalesce. So some of those patients are coming to our facility now.”

The hospitals in the Nuvance system “all are working together as one big health system,” Hirko said. “We are all interchanging patients depending on what level of care we can  offer. It’s working very well and we are doing our part by accepting patients from Norwalk and other hospitals who had no place else to go.”

As Sharon Hospital prepares for what could be a peak in the need for COVID-positive patient care over the next two weeks, Hirko said that the state is building field hospitals in several locations, including Sharon.

Construction of an Army field tent hospital happened in Sharon on Friday, April 9. It took about six hours to put the concrete anchors in place, inflate the tent, line the walls, connect electricity and HVAC and add entries to the front and back.

Retired career military officer Daniel Murphy, who is director of the New England Disaster Training Center, oversaw the construction project. The workers were all members of the Connecticut Militia.

In general, he said, the militia’s role is largely ceremonial but a year ago the Adjutant General of the Connecticut National Guard, Major General Francis J. Evon Jr., suggested that the militia members get trained to perform  emergency tasks.

The task they were assigned was to learn to construct field hospitals. This was before the threat of COVID-19 made it seem that the hospitals would be needed. As it turned out, the militia were trained and ready to go and the materials were available.

They are state field hospitals

The field hospitals are owned by the state Department of Public Health and are a project of the governor’s office, not of Nuvance or Health Quest. Sharon was chosen as a location for the fourth and at this point final field hospital in the governor’s COVID-19 surge plan because of its location and the ease of accessing it, by helicopter if necessary and by other means of transportation.

At this point  it has not been determined what type of patients will be cared for in the field hospital. They are only there as backup, in case there is a need for more beds.

“They are meant to, if needed, house patients locally and across the state,” he said, “should facilities statewide require extra bed capacity during a significant increase in COVID-19 cases.”

Just for back up

Hirko stressed that, for now at least, “we are NOT overwhelmed.” The field hospitals are being set up just in case.

The four field hospitals,Murphy said, are in Sharon, New Haven at St. Francis, Danbury and Middlesex.

The field hospital at Sharon is “fully contained,” Hirko said. “It is hooked up to our electricity and heat and hot and cold running water.”

The tent can hold 25 patients, most of whom will not need to see a doctor but can be treated by nurse practitioners and other medical staff.

Hirko stressed that, “Our goal is to be sure we’re prepared and never have to use the field hospitals.”

He also stressed that he and the Sharon Hospital staff are trying hard to be transparent and keep the community informed.

“We want to be sure there are no secrets and no confusion.”