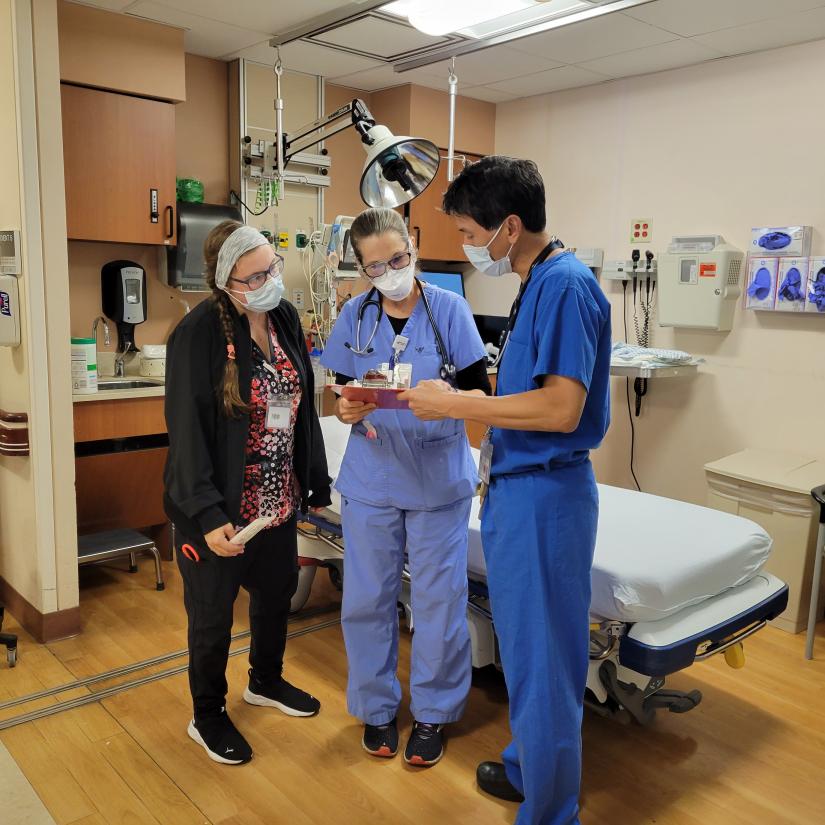 October 5, 2022
By
Debra A. Aleksinas
Patient feedback reveals they are willing to travel a little farther to receive a high level of care at a hospital that is not congested and where they don’t face excessive wait times to book appointments.

Editor’s note: Sharon Hospital’s plans to eliminate Labor and Delivery and substitute its Intensive Care Unit with a Progressive Care Unit have captured headlines for months. This story takes an overall look at the hospital’s services.

SHARON — A bloodcurdling wail from a young child in distress pierces the calm inside Sharon Hospital’s Emergency Department, drowning out the soft, rhythmic beeps of nearby monitors. Doctors and nurses are huddled around the lone patient on this weekday afternoon in one of the department’s 10 treatment rooms, which were filled to capacity the prior evening.

Dr. Ron Santos, who has served as director of the Emergency Department for 12 years, described the ED as a no-judgment zone, where all who enter are treated with equal doses of attention and care, whether they present in dire straits or for less-serious injuries or health issues.

“We’re here to help people when they think they are having an emergency,” said the physician. “We never want to minimize their concerns.”

The ED, which is staffed 24 hours per day, seven days a week, 365 days of the year and on average treats about 40 patients per day, is often the first point of contact between patients and the hospital.

But it is hardly the only department in the 78-bed, 250,000-square-foot, acute-care hospital providing services to the community. On average, about 250 people receive inpatient and outpatient services in a single weekday, according to hospital officials.

A walk through the departments

A recent late September tour, guided by President Christina McCulloch, offered insight into the daily operations of the

community hospital, from some of the traditional services available in the full-service community hospital, to new enhancements including a telehealth kiosk allowing virtual care for oncology, neurology and infectious diseases, enhanced stroke support and care, state of the art imaging and expanded senior behavioral health and women’s health services.

McCulloch walks and talks as she approaches the Labor and Delivery unit, where two of the department’s six beds are occupied. Except for the presence of a security guard outside the hallway leading to patient rooms, all is silent.

L & D, a year after plans to close were made public

Labor and Delivery, which sees less than one birth per day, has been a controversial topic since Sharon Hospital’s parent company, Nuvance Health, unveiled plans a year ago to shutter the maternity unit and transform Intensive Care into a Progressive Care Unit.

Finances are the driver

Nuvance leadership maintains the cuts are financially necessary to remain open and stable in the long-term, and are needed to staunch the $41 million in red ink annually, a situation described as “unsustainable” in an independent analysis from the hospital consulting firm Stroudwater Associates.

Part of its transformative plan is boosting investments in key services tailored to the demographic it serves. Sharon Hospital’s service population is older than Connecticut and national averages.

“I am aware that Nuvance has increased its social media and written communication about Sharon Hospital, which had been non-existent for years,” noted Nancy Heaton, CEO of the Sharon-based Foundation for Community Health, which helped fund the Stroudwater report. “I know, too, that they have conducted many small community meetings in hopes of communicating directly with residents about their intentions.”

Heaton commended the hospital for its recruitment and retention of physicians, especially primary care physicians, to the area.

Soft light streams though the window of a cozy room with a small, round table, two comfortable chairs facing a very big wall monitor. Located just inside the entrance to maternity, the area houses a new telehealth kiosk. The fully staffed set-up allows patients to make face-to-face virtual appointments with an oncologist, neurologist or infectious disease specialist.

McCulloch explained that the kiosk was installed in response to needs expressed by the community for access to specialty services.

The telehealth kiosk fills that gap, she said. “A person can make an appointment to see an oncologist, then have labs and testing done here, without having to leave Sharon.”

Transportation is a challenge in rural areas, made especially difficult in one with an aging demographic. Sharon Hospital’s patient service area straddles the remote Connecticut/New York border area comprising 41,573 residents.

Thirty-five percent of the hospital’s total service area population is from Connecticut and 65 percent is from New York.

With a tap of a badge, the heavy double door swings open to the radiology/imaging department, where an average of 12 people visit daily. We are greeted by a smiling Ken DiVestea, the unit’s director. A patient is currently occupying the state-of-the art MRI machine, so that is off-limits to the tour, but DiVestea is excited to show off a high-tech 3-D imaging mammography unit.

The hospital recently invested in a new MRI machine, as well as a state-of-the art, 3-D mammography unit, the “gold standard” for detecting breast cancer, and DiVestea said he is awaiting delivery of a new bone density system in early 2023.

“We really are trying to offer everything we can to the community,” McCulloch said.

That includes expansion of the hospital’s senior behavioral services, she said.

“Historically we’ve had a 12-bed geriatric psychiatric unit, but now we have 17 beds,” she said, making the Sharon facility one of only three geriatric psych centers in the state, serving Massachusetts, New York and Connecticut.

Patients come from either extended care facilities, or Sharon Hospital’s ED, and stay overnight with most stays involving two weeks of intensive therapy and medication adjusting for individuals suffering from dementia, anxiety, depression, schizophrenia and a range of disorders affecting the elderly.

Treating open wounds does not sound like the kind of job that fits everyone. But for the staff at the Outpatient Wound Center, helping patients change dressings and promote healing of wounds that are post-surgery or infected, or painful or difficult to heal, is all in a day’s work. “We love what we do!” said lead nurse Tracey Waite.

A daily average of 12 patients pass through the outpatient wound unit. This department comprises a team of doctors, nurses and therapists including Waite, Dr. Amy Tocco and Dora Proe at the unit’s front desk. They provide individualized treatment to help people, such as those with diabetes or vascular issues, return to their normal daily activities. The Wound Center’s three clinic rooms have seen an uptick in patients recently, attributed to Waite’s outreach efforts.

“I go around communicating with other providers, reminding them that we’re here,” said Waite.

Next, we arrive at the hospital’s Surgical Unit. Dr. Mustafa Ugurlu, a general surgeon who has headed the department for the past six years, has just concluded a meeting with Susan Strobino, the unit’s Licensed Practical Nurse (LPN). Strobino emerges from the office with an armload of surgical supplies, and Ugurlu takes a few minutes to reflect on a recent increase in elective surgeries.

“Good volume” is how Ugurlu described the pace of elective surgeries. The surgeon said patient feedback reveals they are willing to travel a little farther to receive a high level of care at a hospital that is not congested and where they don’t face excessive wait times to book appointments. About 35 people per day on average are inpatients at the hospital.

A small, green bean bag is hurtling toward my feet as I enter the hospital’s Rehabilitation Department. Giggles erupt just around the corner, where a small boy is taking delight in tossing the bean-filled pouches down the hallway. Nearby, two patients are lying on benches awaiting the physical therapist’s healing touch, and another is performing stretching exercises under the guidance of staff. Tuesdays and Thursdays, according to staff, are especially “crazy busy,” when it’s not uncommon for 60 to 70 patients to be booked for services with physical, occupational and speech pathologists.

“We see patients who have orthopedic surgeries and injuries, neurological disorders like Parkinson’s disease and stroke, vestibular and balance disorders, swallowing and voice disorders, as well as children with developmental delays or orthopedic injuries,” according to Melissa Braislin, director of rehabilitation services and cardiac rehab.

The hospital’s rehab department also offers various support groups and activities to the public, including a Stroke Support Group, Total Joint Camp and an Arthritis Exercise Class. With the exception of the exercise class, those programs are free.

Braislin said the recent closing of Outpatient Physical Therapy at Geer Village Senior Community in North Canaan led  to an influx of appointments. “We have seen an increase due to Geer PT closing,” said Braislin.