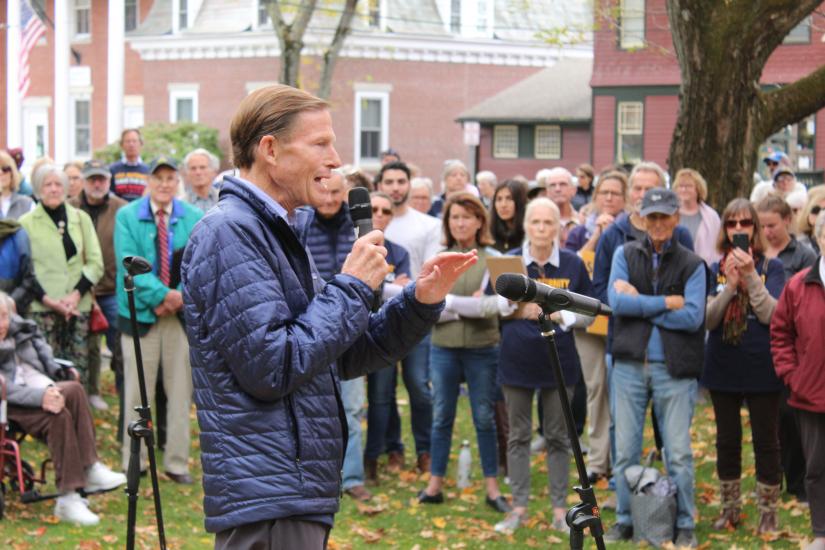 SHARON — A crowd of more than 300 people, including U.S. Sen. Richard Blumenthal (D-Conn.), came to the Sharon town Green Sunday afternoon, Oct. 16, to protest the plan to close Sharon Hospital’s labor and delivery unit and reconfigure the intensive care unit.

The rally was originally intended to serve as a lead-in to a public hearing (online) before the state Office of Health Strategy on Tuesday, Oct. 18.

However, OHS announced Friday, Oct. 14 that the hearing has been postponed to an undetermined date due to “recent activity on the docket.”

Save Sharon Hospital, the organization that is leading the effort to block the closing of labor and delivery, has petitioned for intervenor status for the hearing.

The notice of postponement requires Nuvance Health, the hospital’s parent company, to respond to the SSH petition by Oct. 21, and for SSH to reply to that by Oct. 25.

Lydia Moore of SSH opened the rally by noting OHS had postponed the hearing “in part because of all the testimony.”

Moore said last time she checked the OHS website there were 54 letters posted. “So who knows what kind of backlog” OHS has.

Moore said the SSH cause has significant political support, noting that Gov. Ned Lamont has expressed his concern about the situation, and that Blumenthal has sent his own letter to OHS.

She noted that Nuvance is not arguing for closing labor and delivery in terms of safety or quality of care.

“It boils down to an assertion of high cost, and that can’t be the end of the discussion. It should be the beginning of a conversation” about how to combine state, federal and community resources to keep the unit open.

Horn introduced Blumenthal, who reminded the crowd that he was state attorney general in 2000 when the hospital was purchased by Essent Healthcare.

(The reconfiguration of the ICU is the subject of a separate application by Nuvance before state regulators.)

“I’m a progressive, but I want an intensive care unit,” he said. “Once you start putting profits before patients, there is no telling where it will end.”

U.S. Rep. Jahana Hayes (D-5) said she has sent her own letter to OHS, and expressed irritation that Nuvance is going ahead with its plan after Hayes voted for legislation that provided funds for community hospitals.

“Not on my watch,” she said to cheers from the audience.

Gregg Pulver, the chair of the Dutchess County, N.Y. Legislature, said residents of Amenia and Millerton and other nearby towns in New York have just as much at stake as their Connecticut counterparts.

Pulver got caustic. “The idea that the CEO who made $2.5 million two years ago and $18 million last year can’t figure out a way to keep maternity alive? That’s bullcrap!”

“We are just as much a part of this as you.”

Several local residents told their stories of how Sharon Hospital responded quickly and efficiently to their obstetric emergencies.

State Representative Steven Harding (R-107), who is running for the state Senate’s 30th District spoke. Chris DuPont (R), who is Horn’s opponent in next month’s election was on hand but did not speak, as was Harding’s opponent, Democrat Eva Bermúdez Zimmerman.

Their remarks were similar to what they said on Wednesday, Oct. 12, when Kent residents gathered at St. Andrew’s Church to voice opposition to the planned reduction of Sharon Hospital services.

Similar roundtables were held in recent weeks in Sharon, Salisbury and Millerton, each led by a panel of Sharon Hospital physicians and SSH board members.

The audience heard from financial expert Victor Germack who spoke of the exemplary quality of care offered by Sharon Hospital, one of only four independent hospitals in the state.

“The devil is in the details,” Germack said, urging listeners to delve more thoroughly into what is proposed and likely effects of those changes.

Kurish, a cardiologist with 43 years of local service at Sharon Hospital, opposed the proposed change, reducing intensive care to progressive care. He claimed an increasing delay in getting patients’ test results back.

“Patients are needing to wait longer for their test results,” Kurish said. He added that nurses want to use their depth of professional experience helping patients in intensive care, not in a progressive care unit. He warned that the hospital could degrade into an urgent care center.

“I can’t understand why the community cannot support the full-service hospital, rather than losing services,” Kurish said. “You have to have an ICU, or else you don’t have a hospital,” he added.

Resident David Sturges of Kent spoke at the Oct. 12 roundtable. “Their job is to heal the sick, not to make money. You have a good full-service hospital at Sharon and it should be preserved,” he said.

With 31 years of experience at Sharon Hospital, obstetrician Mortman reported at the Kent roundtable that in all his years of practice in Sharon, “I have not lost one mother.”

“Patients’ voices and experiences need to be heard,” Mortman said, reminding listeners about the high volume of patients from New York who rely upon Sharon Hospital and who must not be overlooked.

Mortman spoke about emergencies to be dealt with speedily, within minutes in the case of obstetrical complications when there is no time to transport the patient to another facility. He hoped that Nuvance would “come to the table” and find a way forward.