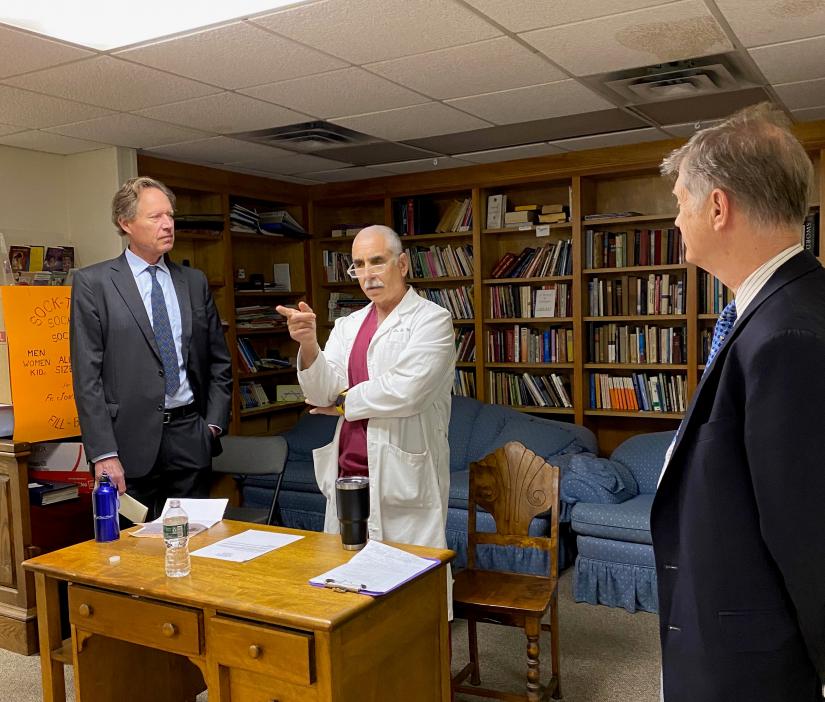 Nick Moore, left, board member of the Save Sharon Hospital organization, Dr. Howard Mortman, center, obstetrics and gynecology, and Dr. David Kurish, internal medicine and cardiology, led a roundtable discussion of proposed cuts in services at Sharon Hospital from the physicians’ perspective on Friday, Sept. 23, at St. Bernard Church in Sharon. Photo by Leila Hawken

SHARON — The first of three public roundtables coordinated by the Save Sharon Hospital (SSH) citizens’ organization to rally support in opposition to planned cuts in services at the hospital was held on Friday, Sept. 23, at St. Bernard Church in Sharon.

Based on their decades of practice at the hospital, the physicians presented their own accounts of the high quality of care jeopardized by the planned cutbacks, pleading with the community to join in a campaign that will culminate in a Save Sharon Hospital rally on the Sharon Green on Sunday, Oct. 16.

That rally will lead into a critically important state public hearing scheduled for Tuesday, Oct. 18, on Zoom, through the Office of Health Strategy (OHS), an independent review body that will decide on the Nuvance proposal to limit services at Sharon Hospital.

SSH urges residents to view the hearing and offer comments either in advance or during the hearing, as well as to contact state representatives asking that they act to preserve Sharon Hospital services.

Introducing the discussion, Nick Moore, who serves on the seven-member SSH board, recounted that in 2018, Health Quest (now Nuvance) purchased Sharon Hospital in a public-private partnership, with Nuvance promising to maintain all services for a period of five years, under a Certificate of Need agreement.

Within that period, Moore said, Nuvance has sought to reduce services, citing financial pressures, an aging population and safety concerns, all three of which he said are arguable.

Save Sharon Hospital came into being in 2018 to resist an earlier attempt to eliminate maternity services. That campaign was successful.

In September of 2021 Nuvance announced plans once again to eliminate maternity services and to reduce services relating to the surgical department and the Intensive Care Unit. Once the service cuts were announced, Dr. Kurish reported, the doctors voted 25-1 in opposition to the plan.

“We are counting on the community to show support,” Dr. Kurish told the audience, drawing on his more than 40 years of service to the community and the hospital. “Our facility is outstanding,” he added. “The community will need to rally to maintain services.”

“For 31 years I have been practicing here,” said Dr. Mortman of his length of service and devotion to the hospital community and to his patients. He referenced national studies highlighting the critical importance of providing increased access to high-quality maternal health care, particularly in rural areas.

Speaking of his early years, Mortman said, “When I came up here, Sharon Hospital was everything I could have dreamed of.”  He described the broad diversity of patients treated without regard to their insurance status, only that they needed care.

“Every patient could be my family,” Mortman said. “If you take away the bureaucracy,” he added, “our hospital is as good as it gets. We offer comprehensive health care.”

Mortman pointed to Sharon Hospital’s 5-star rating, one of only three in the state with that distinction in terms of mortality, safety, and timely and effective care.

“There is nothing safe about practicing obstetrics in a facility without full services,” Mortman added, going on to describe cases with positive outcomes only because the hospital was fully equipped to respond.

“You cannot put someone in an ambulance, if that patient is not safe to transfer,” Mortman argued. “With neo-resuscitation cases, you don’t have time,” he added.

Moore spoke about the tangible value of the hospital’s medical professionals living in the community and how their family members add community strength by making their homes here, serving on local boards, volunteering for organizations and enrolling their children in the schools.

During public discussion, residents clarified the effects of the changes, speaking also of Windham Hospital, owned by Hartford HealthCare, having curtailed its services.

One resident countered a locally voiced opinion that reduced maternity services would have no effect on their lives or wellbeing if they are not planning to have a child. In fact, she said, elimination of maternity has a ripple effect. With no maternity department, the surgical department and the intensive care area are not required within regulations to offer full capabilities, equipment and staffing.

Mortman called for a cooperative solution to be found to bring Nuvance and Sharon Hospital to accord. “It has to be about money, because it is not about care,” he said.

“The state needs to step up and help us,” Mortman said, urging residents to speak with their neighbors, attend the upcoming rally on the Sharon Green on Sunday, Oct. 16, at 2 p.m., write letters to public officials, and provide written or oral testimony at the OHS public hearing on Zoom, Tuesday, Oct. 18, beginning at 3 p.m. when public testimony begins.

The next SSH roundtable will be held on Thursday, Sept. 29, at the Scoville Memorial Library in Salisbury, beginning at 4 p.m.

The third and final SSH roundtable will be held in Millerton on Wednesday, Oct. 5, at the Northeast/Millerton Library Annex, beginning at 6 p.m.

For additional details, go to www.savesharonhospital.org.