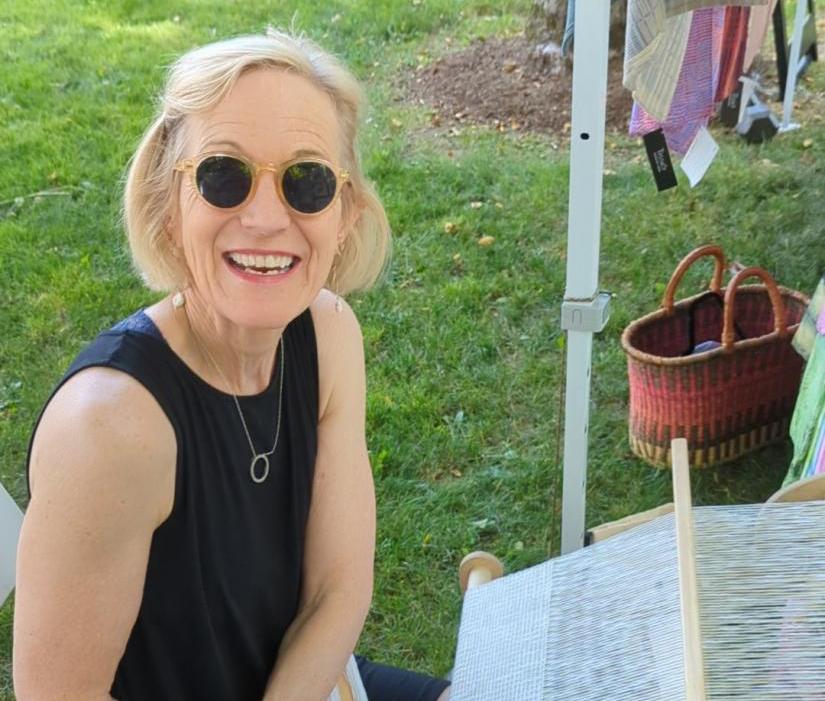 Anne Cameron worked on a portable loom during the Sharon Arts and Crafts Fair Saturday, Aug. 6. Photo by Riley Klein

Over 50 vendors at Arts & Crafts Fair

SHARON — Artisans from the Northwest Corner and beyond set up shop at the Sharon Green on Saturday, Aug. 6, for the Sharon Arts and Crafts fair. It was the 63rd year of the event.

Creativity and craftsmanship were on full display within the tents that lined the Green along Main Street.

Matt Andrulis-Mette, who has coordinated the event for 22 years, was pleased with the turnout despite the hot and humid weather.

“It’s the local-ness, I think, that attracts the people,” said Andrulis-Mette.

While most vendors are from the area and have been attending the annual fair for years, there were a handful of new faces this year from both near and far. Crafters traveled from across New England, New York and New Jersey to display their wares.

For some first-timers, the fair provided an opportunity to introduce themselves to their new neighbors. Anne Cameron of Tissé Designs, who moved to Sharon last year, showcased her custom woven goods.

As she worked on weaving a scarf with her portable loom, she provided information on her products and the process of creating handwoven items.

“This is a rigid heddle loom,” explained Cameron, “and I teach people how to weave on these.”

All of the items seen at the fair were original pieces, but Andrulis-Mette said organizers are cautiously considering allowing certain resellers to attend in the future.

“We’d like to see more vendors, but we don’t want it to become a flea market,” said Andrulis-Mette.

With over 50 vendors in attendance this year, the outlook for future fairs remains strong. Proceeds of the fair benefit the Sharon Parks and Recreation department.

A post shared by The Lakeville Journal Company (@lakevillejournal)