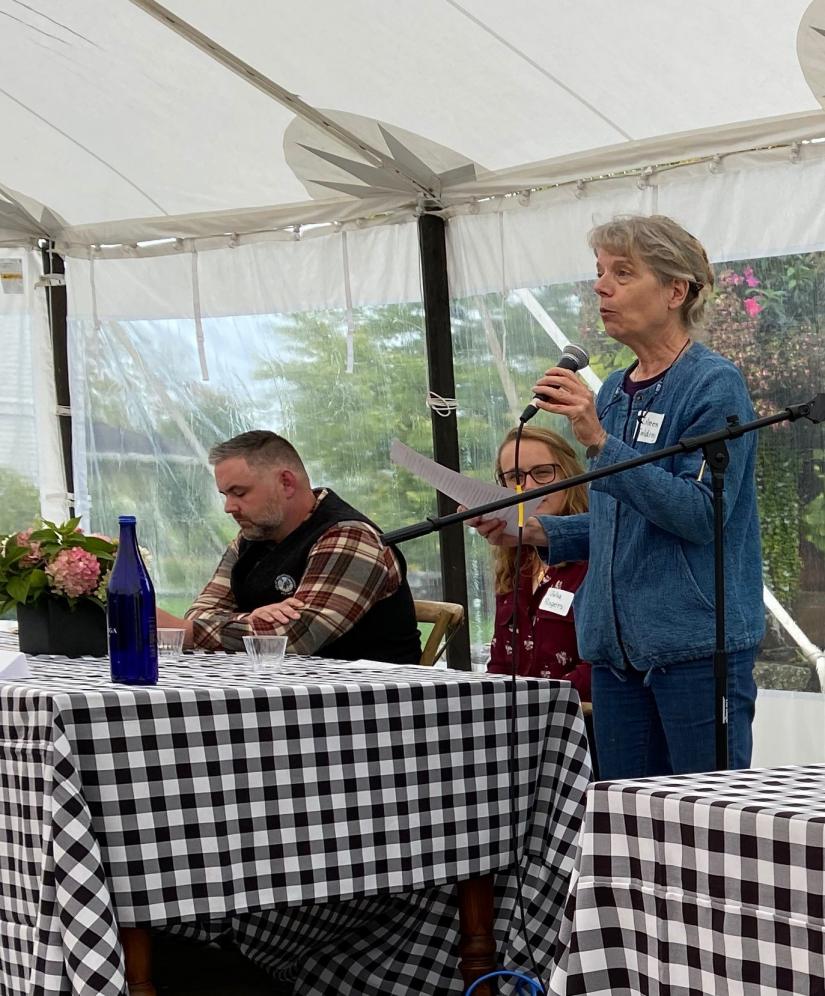 Climate change and carbon capture were the focus of a panel discussion hosted by the Sharon Audubon Center on Sunday, Sept. 25 at LionRock Farm in Sharon. Eileen Fielding of Sharon Audubon kicked off the discussion. Photo by Leila Hawken

SHARON — Although the rate of progression is imperceptibly gradual, climate change spurred on by carbon in the atmosphere is relentless, a force that needs to be resisted.

In an effort to inform area residents of the perils and actions that can be taken, Sharon Audubon Center convened a gathering of nonprofit organizations dealing with conservation and a panel of experts to present information about trends and corrective actions.

The conference that drew over 125 participants was held at LionRock Farm in Sharon on Sunday, Sept. 25, and was titled, “Connecting Carbon, Climate and Conservation.” The focus of the program was an effort to define ways to capture carbon through forest management and by effective plantings, helping to fend off the effects of climate change.

“Considering climate change to be the most significant threat to birds, Audubon has no choice but to be involved,” said Eileen Fielding, center director at Sharon Audubon.

“The idea [for the event] has been in the works for a while,” said John Brett, chairman of the Audubon Stewardship Board, during an interview just before the start of the panel discussion.

“The aim is to bring together nonprofit organizations with like-minded perspectives on the issues. We’ll do more,” Brett said.

According to Brett, the idea came about during a dinner conversation he had with Roger Liddell of the Sharon Land Trust and Joshua Ginsberg of the Cary Institute in Millbrook, New York.

“Focusing on clean-up, how do we get the carbon out of the atmosphere?” asked Fielding kicking off the discussion.

Panel member Matt Gallagher, director of programs and operations at GMF, responded that carbon is one of his key management objectives.

“Carbon pools store carbon,” Gallagher explained. The variables are the quantity stored and how it changes over time. “Both are necessary to mitigate climate change,” he added.

“Sequestration” is the process of removing carbon from the atmosphere, Gallagher said. Strategies can include protecting forests from other uses, increasing diversity, increasing numbers of young trees, increasing structural complexity within forests (young, medium and mature stands) and increasing the use of wood products because harvested trees make room for new growth.

Speaking of the watershed area stretching from Pittsfield, Mass. southward to Long Island Sound, Julia Rogers of HVA spoke of the “Follow the Forest” program. She advocated maintaining forests as forests, important to wildlife and using plants that will withstand the progression of climate change.

Rogers said that just protecting segregated blocks of forested land is not enough. Mapping connections among the blocks is essential in order to see what should be happening at the local level.

“Understanding how we fit within the matrix is an important goal,” Rogers said. “We are all members of small communities.”

“You have to know that the trees will be there in 50 to 100 years,” Crockett said, stressing the importance of a farm having long-term tenure.

“A carbon-rich soil is essential to successful farming,” Crockett added, stressing the importance of reduced soil disturbance. He was encouraged by noticing that local dairy farmers are engaged in no-till farming. Organic matter promotes the growth of beneficial fungal colonies, he noted.

“The biomass of birds has declined,” Fielding reported. “The population has declined by half in the past 50 years,” she said, adding that if the average temperature increases by three degrees centigrade, two-thirds of birds will lose their habitats.

“We can increase the amount of carbon we are sequestering,” Fielding said, noting that the state is now 60% forested. She added that 80% of that forested land is privately owned, but over half of those privately-owned parcels are in the hands of small landowners.

Discussion with the audience turned to invasive plant species plaguing the area and how best to eradicate them, including biocontrol methods.

Liddell noted that mugwort, an invasive, produces up to 200,000 seeds per plant.

Emphasizing that residents need to remain informed, Liddell said that he hoped that the event will be the first of multiple meetings when organizations gather to offer informal discussions guided by conservation experts.