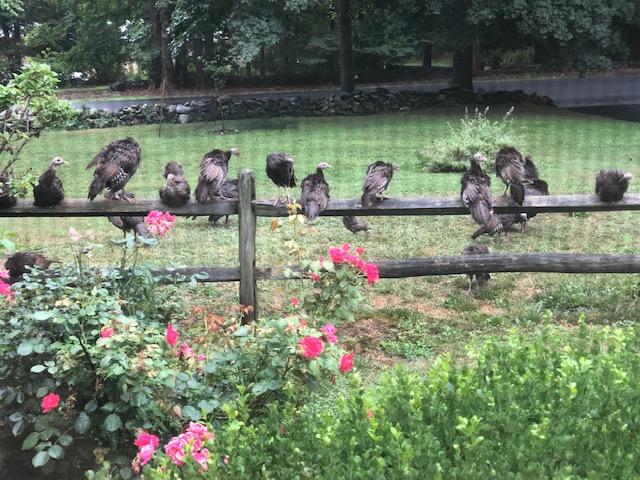 David Singer snapped this photo of an extended turkey family poking around his backyard in Lakeville on Aug. 22. Photo by David Singer

LAKEVILLE — David Singer has enjoyed the show put on by  turkey families over the years at his house on Belgo Road in Lakeville.

“We regularly host turkeys on our property, from single hens to pairs and large groups of 20 to 30 turkeys,” he said. “Sometimes the males are in full plumage — which is very amusing as it seems to make it difficult for them to walk. They seem very self-important.”

Every year there are more and larger flocks of turkeys crossing the roads in the Northwest Corner. They seem to like the forest the best, and Singer says he believes that’s where his turkey visitors come from. They aren’t necessarily attracted by food, although they do manage to get some meals on the property.

“We are surrounded by woods. The turkeys often enter our property from the woods. They eat the goodies that fall from the trees. We have a vegetable garden, but it is fenced in and they cannot access it.”

Last week, before the heavy rains that came with Henri, Singer captured this image of parents and “poults,” during the drizzly late afternoon on Sunday, Aug. 22.

“That same family of two adults and nine littles ones have made four separate visits to our backyard today alone — during the morning and afternoon. They have been stopping by the past week or two.”