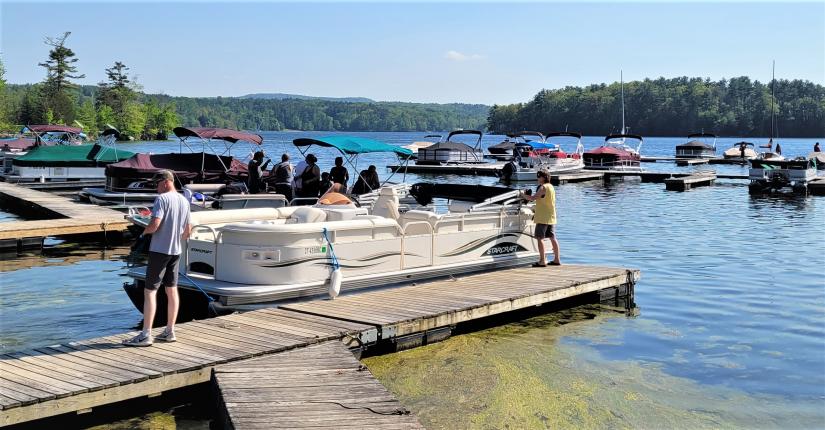 A steady flow of pontoon boats launched from O’Hara’s Landing on Twin Lakes in Salisbury last weekend, as part of a growing trend in popularity. Photo by Debra A. Aleksinas

SALISBURY — The “whatever floats your boat” concept is not OK with a group of Twin Lakes shoreline homeowners, especially when it involves loud music laced with profanity, boisterous party boats and water safety concerns.

That message was expressed loud and clear during a membership meeting of the Twin Lakes Association (TLA) last summer, as 50-plus members sought solutions from the board, and the town, in the hopes of avoiding a repeat scenario this summer.

However, with no immediate remedy in sight, the complaints are likely to surface again with the arrival of Memorial Day weekend and the 2022 boating season and buoyed by burgeoning lake usage tied to the COVID-19 pandemic as well as a shortage of state lake patrols.

Grant Bogle, TLA president, said his group has brought proposed solutions to the “growing problem” on the lakes to the town’s attention, and he credited First Selectman Curtis Rand for being responsive to lake property owners’ concerns.

“As we got into the winter months, the state evidently changed some of its regulations regarding town constables, and as a result we don’t have anyone to man the patrol boat that would go out on the water,” he noted. “We have just been striking out with options. We think there may be a longer-term solution, but I am concerned about this year. We are a long way from saying that we have a plan.”

Bogle said the topic is sure to surface at the TLA’s membership meeting on June 18. “I haven’t shared this with members yet. I know people are going to be concerned.”

Noise complaints not new, but growing

While noise complaints have always existed, they are rising due to increased lake usage. More lakefront property owners are working from home, out-of-town visitors are seeking outdoor  recreation at lakes throughout the Northwest Corner and boat rentals and sales are skyrocketing.

Taylor Hammond has manned the bait shop at O’Hara’s Landing for about a decade, and the most significant change he’s noticed is the proliferation of pontoon boats, which can accommodate up to 14 passengers.

“It’s more like driving a minivan rather than an Aston Martin,” he said, referring to the pontoons as “party boats.” As for the noise out on the lake, Hammond said it unfortunately comes with the territory when you own waterfront property. “It’s not like you bought a private lake for yourself.”

Another ripple effect of the pandemic has been that people have canceled long-distance vacations, are working remotely and are staying closer to home.

“As far as the lake population goes, many people came up from the city and worked from home here,” noted Bill Littauer, president of the Lake Wononscopomuc Association.

Bogle said the same is true at the Twin Lakes.

“It was more than just last year. This has been a growing challenge. People are not aware how intrusive their music is, and how far it travels. We want everyone to have fun and enjoy the lake, it’s just that we want people to be safe and respectful.”

Issues are many,
solutions are few

Last June, the idea of an ordinance banning music on the water after 5 p.m. was floated at a June TLA meeting, but an after-hours prohibition on music has never been discussed at an official level, Rand said at the time. Other potential strategies, such as measuring decibels or banning externally facing tower speakers, pose enforcement challenges, but have not been ruled out.

Officer Mike Brenner of the State Police water patrol acknowledged the noise issue at that time and noted that music from tower speakers on some ski boats can be heard across the lake, but that the state does not have resources to be on the water all day.

He and Rand have encouraged lake goers to politely ask offending boaters to turn down the volume. When that doesn’t work, law enforcement gets called in, as was the case last September when Connecticut State Police removed a boat well after sundown from East Twin Lake after at least three callers complained of loud music and profanity.

Reached by phone on Sunday, May 22, Rand said although he “hasn’t pulled the trigger yet,” he is pursuing an option he hopes will put a patrol presence out on the lake in about a week.

“We are doing something this year that we hope is temporary and next year we will really push on getting the person trained and in the DEEP program,” said the first selectman.

“I think we have a solution to get some people to fill in on the weekends, but that’s about it. We are not going to be up there every day. It’s like policemen can’t be everywhere speeders are.”

He said Salisbury no longer has a town constable, so the challenge is to find individuals who can “handle the liability” out on the lake.

Two fishermen and a radio

“This is not a new problem. It’s been going on as long as I can remember,” said David Haab, owner of the marina at O’Hara’s Landing. “Around the late ’60s, early ’70s, someone called the State Police barracks because some guys in a boat were making noise out on the lake. They were two fishermen who had a Red Sox game on.”

The problem, he said, is that noise travels across the water. “It’s only a few people and generally speaking they can be talked to.”

Haab said he knows of a father/son duo who are among the offending boat owners and he has had conversations with them about keeping the music at a respectable level. “You can’t tell people how to outfit their boat, it’s just not going to work.”

Rather, his recommendation is to hire a lake patrol officer for weekends or holidays. “People know they are making noise and if someone is going out there with blue flashing lights asking you to turn your radio down,” it usually works, said Haab.

Bogle noted that the State Police have indicated they do not have the manpower for patrols this year.

If necessary, he said, the town and TLA could come up with resources to fund a patrol position. “We’ve got a boat and we need somebody who is trained and able to go out on the water. But I don’t know about this season, and that’s a problem.”