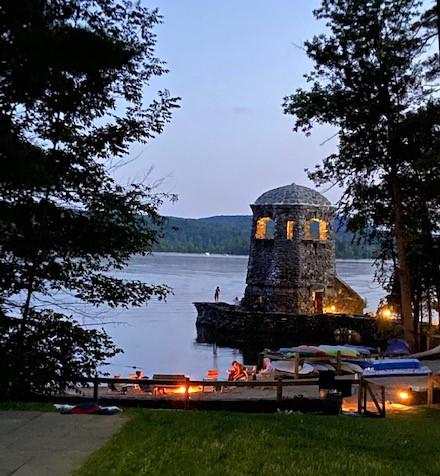 June 22, 2022
By
Debra A. Aleksinas
“The students always ask so much about the history and the ghosts that live on the island.” – Jeffrey Bravin, Executive Director, American School for the Deaf

SALISBURY — A popular summer camp for deaf and hard-of-hearing youth is returning to Isola Bella on East Twin Lake following a two-year hiatus due to the COVID-19 pandemic.

The venerable camp, run by the American School for the Deaf (ASD), has owned the island since 1963 and underwent an extensive renovation this spring in preparation for the campers’ return.

Beginning Saturday, June 25, the camp will welcome 72 students over two sessions this summer, marking an increase of 48 campers, pre-pandemic, according to Jeffrey Bravin, the school’s executive director.

The island, with its mature forests, remote setting via a long, narrow causeway from the mainland, historic stone tower and colorful past, provides the perfect setting for the summer camp experience — including the tradition of telling ghost stories around a blazing campfire.

“We have basically run the camp using the same format for many years with some modifications, so there’s a lot of tradition during the camp,” said Bravin. “The students always ask so much about the history and the ghosts that live on the island.”

Eleven former owners and a plethora of lore

The history of Isola Bella is ripe for retelling. It begins with its first owner, Eliphalet Whittlesey, who settled on the Twin Lakes after the Revolutionary War. Over the next two centuries, the island knew 11 more owners before it was deeded in 1963 to ASD.

In the early years, according to a historical account of the Twin Lakes and Isola Bella as described by Winfield McChord, Jr., and a history of the Twin Lakes compiled by the Twin Lakes Association, the island was cleared of trees by its owners so the land could be used for grazing sheep and growing grain.

Then, about a century ago, trees were replanted, and farming was discontinued.

In 1892, the Camp Riga Club’s 40 members purchased the island, then known as Bishop Island, for $2,500. Members were known to spend wild weekends on the island, going between the island to the mainland in the club’s steamboat named Jessie.

One story tells of an inebriated club member who fell into East Twin Lake. Attempting a heroic rescue, another club member, also over imbibing, staggered down to the dock and carefully removed his expensive $5 necktie. It was only after he had dove into the water that he remembered that he had a $500 watch in his pocket.

About that ‘bat tower’

The island’s iconic, 40-foot stone tower, commonly referred to as the “bat tower” by residents, was thought to be inspired by a similar structure on the northern Italian island of Isola Bella (beautiful island) on Lago Maggiore.

According to historical records, the tower was constructed by a contractor in East Canaan. It is reported that the base required a full carload of cement, especially notable since the only access to the island in 1912 was by boat.

In 1930, George Alvord built the large house currently used as Isola Bella’s Camp House. He hired a Mr. Beale of Taconic to drill a well, and when Beale attempted to transport the heavy drilling equipment in a large boat, the vessel capsized halfway across the lake and all the equipment was lost.

The ASD also has 16mm home movies of the Alvord family showing the main residence under construction. Its architecture is characterized by an attached, looming tower (not to be confused with the separate, free-standing “bat tower”).

A recent tour of the Camp House revealed that several dramatic interior elements are still visible today, including alfresco paintings in the foyer and dining room, massive stone fireplaces and a window niche with a stained-glass reproduction of the Alvord family crest.

A bathtub at the Camp House is surrounded in its nautical nook a meticulously painted goldfish mural painted by George’s daughter, Muriel Alvord, an accomplished landscape artist.

The other causeway that caused a stir

Upon Muriel Alvord’s ownership of the island, she constructed the boathouse on the eastern shore and a second boathouse, which was anchored seasonally in the cover of the tower.

In the mid-1930’s, she had a lengthy causeway built to the island, which caused quite a stir among lake residents back then who feared it would have a negative impact on the lake and its ecosystem. In the 1940s, she constructed a second house for guests, which the artist also used as a refuge where she could paint landscapes.

Muriel Alvord’s husband, Ferrari Ward, was a self-employed independent mechanical developer who lived in West Hartford when they first met. It was through her husband’s friendship with the headmaster of the American School for Deaf that the couple took an active interest in the school.

In 1956, Muriel Alvord Ward became a corporator of ASD, and in 1959 she became the first woman elected to the school’s board of directors. That same year, she passed away.

Her will provided that her husband would have lifetime use of the island, and in the instance that the American Humane Education Society of Boston declined to maintain and operate the property, that he would designate a tax-exempt corporation to receive the island after his death.

In 1962, as the executor of his wife’s will, Ferrari Ward entered into an agreement with the American School for the Deaf that, upon his death, the island would be conveyed to the school.

He died a year later and since 1963 the island on East Twin Lake has operated as a summer camp for deaf, deaf/blind and hard-of-hearing children, as well as children of deaf adults or siblings and youngsters on the autism spectrum.