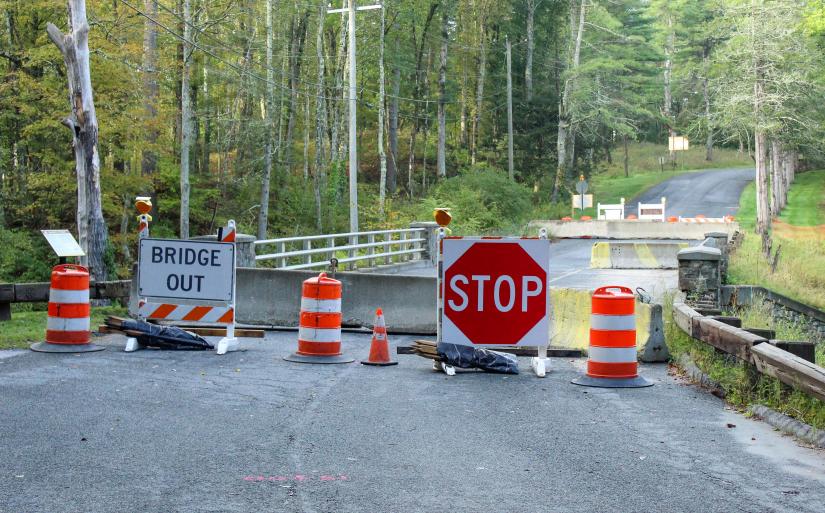 The bridge on Salmon Kill Road will be closed starting Monday, Sept. 19, for repairs and will remain closed until spring. Photo by Patrick L. Sullivan

SALISBURY — The Board of Selectmen met online Monday, Sept. 12, and discussed the  Salmon Kill bridge, the possibility of a new ordinance for short-term rentals, and a new sidewalk between the Scoville Memorial Library and Salmon Kill Road.

The bridge on Salmon Kill Road will be closed starting Monday, Sept. 19, for repairs and will remain closed until spring.

The bridge, which has been confined to a single lane of traffic since April 2020, is between Brinton Hill Road and Route 112.

First Selectman Curtis Rand reported on a recent letter from the Materials Innovation and Resource Authority (MIRA), stating that the waste disposal organization has lost 29 towns after a recent increase in disposal fees. “I’m not sure what the long-term viability is,” Rand said.

MIRA closed the Hartford trash-to-energy plant in July, when it became apparent the facility required an expensive remodeling and that the administration of Gov. Ned Lamont was not interested.

In the interim, the solid waste of MIRA towns such as Salisbury is being shipped to out-of-state landfills.

The selectmen heard from Land Use Administrator Abby Conroy about the possibility of an ordinance to both regulate and possibly issue citations for short-term rental units. A short-term rental is defined as a rental for fewer than 30 days.

Selectman Don Mayland suggested, as an owner of two short-term rental units in Vermont, that Conroy and the Planning & Zoning Commission get in touch with the two main short-term rental companies, Airbnb and Vrbo, and work together with them to see what options they provide for enforcement for those who rent properties. “They could be our best ally in this,” said Mayland.

The selectmen were open to the idea of the ordinance and will work with the commission to determine how best to approach the situation.

Construction of a  new sidewalk on Main Street between the library and Salmon Kill Road will begin in the next few weeks. The sidewalk will be paved, as opposed to concrete.

Rand said that Thomas Brazee is the new road chief and Russell Hoage the new crew chief in the town’s Highway Department.