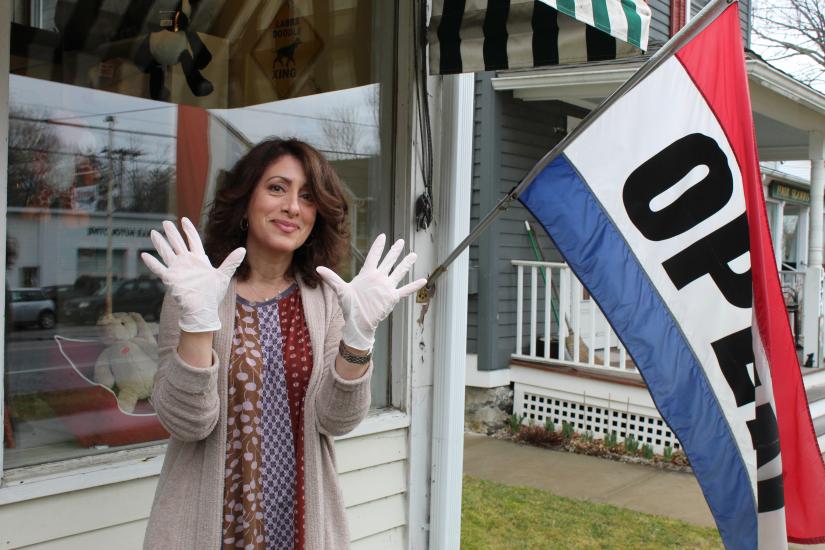 Stephanie Pellegrino will deliver pet supplies to customers in their cars at curbside, with safety gloves on (of course). Photo by Patrick L. Sullivan

Salisbury keeps calm and carries on

SALISBURY — Stephanie Pellegrino at the Petpourri pet supply shop in Lakeville said on Thursday, March 19, that business had been brisk that week, as residents hunkered down for the COVID-19 crisis.

The big question for Petpourri is resupply. Pellegrino said the shipment from one of the store’s two major suppliers was due the next day, but had been postponed until Saturday, March 21.

To limit exposure, the store is only allowing one customer in at a time.

Customers are encouraged to call ahead. And they are.

“The phone’s been ringing off the hook,” she said.

Pellegrino noted that a lot of weekend residents have opened their houses earlier than normal, arriving at the tail end of winter and beginning of spring rather than at Memorial Day, which has contributed to the depletion of inventory.

She said if everyone bought their normal supply there would be enough to go around.

On Friday afternoon, after being summoned by a knock at the door, Pellegrino stepped outside, pulling on her sanitary gloves, for a photo.

“We’ll get through this.”

Note: Pellegrino announced Sunday, March 22, via Facebook that as of Monday, March 23, the store will not allow any customers in the shop and will instead accept telephone orders for curbside pickup only. The phone number is 860-435-8833.

At the Green Cafe, the restaurant side of the Studio Lakeville fitness center, Leslie Allmand-Eckstein was in the kitchen with her son.

With the gym shut down for the time being, and the cafe restricted to takeout orders and deliveries, Allmand-Eckstein has still been busy.

“People have been supporting us,” not just for food orders but in buying gift certificates for meals or massages, renewing their monthly gym memberships, or buying classes with no clear idea of when they will occur.

“I had three re-ups yesterday,” she said, referring to gym memberships. “People feel it’s the right thing to do to help us stay open.”

Note: On Sunday afternoon, March 22, Allmand-Eckstein announced via Facebook that the Green Cafe was closing for at least a week “to clean again and sanitize.”

At LaBonne’s market on Friday afternoon, there were bare shelves where the toilet paper used to be, and the selection in the ice cream and frozen foods cases was on the sparse side.

But the rest of the store was well-stocked, and employees were busy in the aisles putting in new inventory.

The prevailing mood was cheerful.