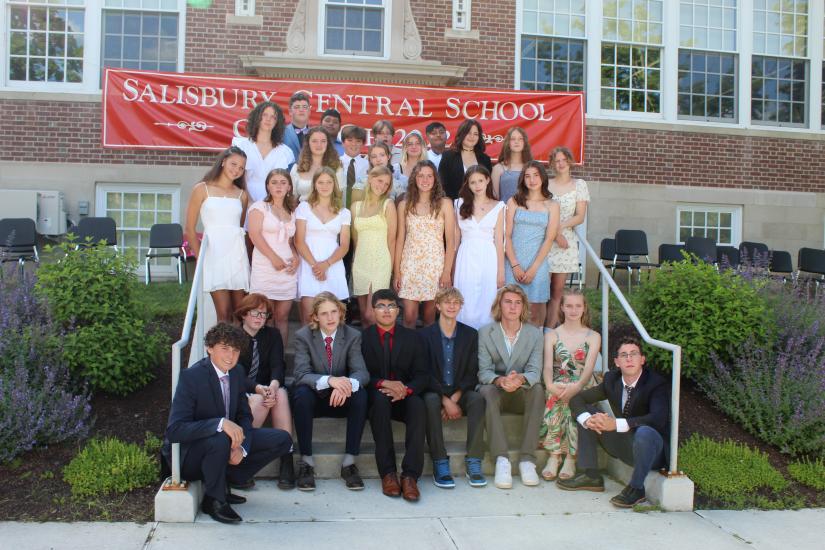 The Class of 2022 from Salisbury Central School moments before the commencement ceremonies began on Tuesday, June 14. Photo by Patrick L. Sullivan

SALISBURY — The annual commencement exercise at Salisbury Central School  (SCS) on Tuesday, June 14, was held outside, in front of the lower building.

The assembled family members could hear whooping from inside before the 27 members of the Class of 2022 emerged and took their seats.

Eloise Prinz quoted Eleanor Roosevelt, “The future belongs to those who believe in the beauty of their dreams,” and said she believes that “every member of our class has the ability to change the world in a positive way”

Annabel Prinz quoted Malcolm X: “Education is the passport to the future, for tomorrow belongs to those who prepare for it today.”

She praised her generation for being aware and involved in current events, even if it meant grappling with difficult subjects.

“We have turned that anxiety into fuel.”

The graduates received their certificates from SCS Principal Stephanie Magyar and Board of Education Chair David Valcin.

Barrett Prinz, school board member and proud father, asked the graduates to take a few moments to appreciate where they’ve grown up.

“I love living in Salisbury. I couldn’t think of a better place to call home, because it’s a true community. People really appreciate where they live and go out of their way to share their time and talent.”

As if on cue, the moment Prinz began talking about the spirit of volunteerism in town, the siren at the all-volunteer Lakeville Hose Company firehouse went off.