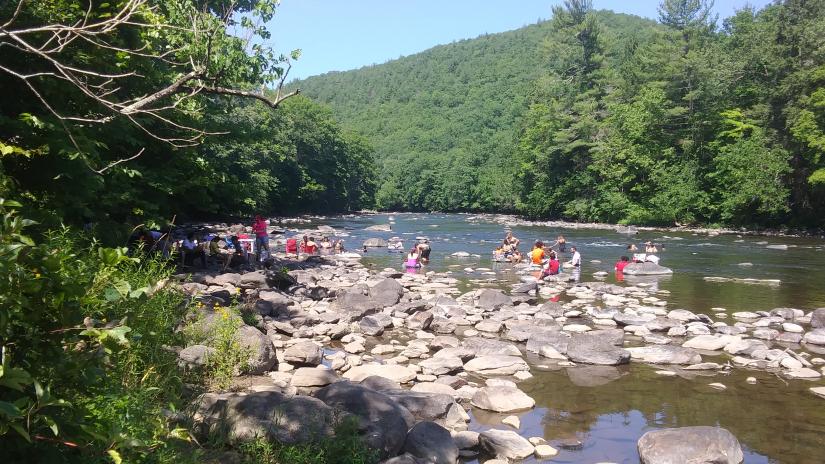 The intense summer heat brought visitors to the Great Falls on the Housatonic River over the weekend. The water level is low but the river is, nonetheless, more dangerous than it looks. Photo by Patrick L. Sullivan

River is still dangerous and overcrowded

AMESVILLE — Efforts to control weekend crowds on the Housatonic River resulted in a somewhat calmer situation over the weekend of July 18-19.

On the Salisbury side of the river at the Great Falls in Amesville (Amesville is a hamlet of the town of Salisbury), at 1 p.m., there were sawhorses and caution tape at the picnic and boat launch area opposite the First Light power station. Two cars were parked on the opposite side of Dugway Road, and a cookout was in progress in the picnic area.

There were two cars at the Appalachian Trail entrance on the Salisbury side of the bridge, and 13 cars on Housatonic River Road, with groups of people walking down the road with picnic and beach supplies. There were very few people wearing masks. The license plates of the cars were about evenly split between Connecticut and New York.

On the Falls Village side, there were three cars parked hard by the bridge and, a few yards south on Water Street, two State Police troopers, who reported they were sending people away at intervals. They were surprised to learn about the 13 cars and the cookout, as they had just been by those areas. They went to deal with it.

Many cars, much trash

Moving downstream along River Road, in Cornwall in the Trout Management Area, at the popular Push Em Up access point, there were five cars, with anglers visible in the river and  a couple people, without fishing gear, just splashing around.

At 1:30 p.m. at the Bend in Cornwall, the situation was similar: three anglers and a family with inflatable plastic float tubes preparing to set off downstream.

At around 2 p.m., there was a family group using spincasting equipment at the upper end of the fly-fishing-only area, on the Sharon or Route 7 side of the river. Fly anglers who had parked at Trinity Conference Center on the Cornwall side of the river were also present. Nobody was catching anything.

At 2:45 p.m., there were just four cars at the Housatonic Meadows state park — all anglers to judge from the stickers on their vehicles.

At 3 p.m. there were an astonishing 19 vehicles crammed into the Cellar Hole, a popular angling and boat launch access point on Route 7 about 2.5 miles north of the intersection of Routes 4 and 7 at Cornwall Bridge. Despite signs indicating a prohibition on swimming, and fly-fishing only, well over 50 people were spread out on the rocks, bobbing around in the water, and using spinning rods. There was loud music and a general air of festivity.

On the way back upstream, 19 cars were observed parked on Housatonic River Road in Salisbury at 3:30 p.m., with commensurate foot traffic.

One Sunday morning, July 19, at 9:20 a.m., there were six large bags of garbage left at the Cellar Hole. Despite this there was still a lot of debris on the ground, including red plastic cups, juice boxes and a used diaper.

At 2:30 p.m. at the falls, the sawhorses and tape were  back up at both sites.  There were two parked cars plus a State Police trooper on the Salisbury side of the bridge, and a dozen cars parked on the Falls Village side.

From the bridge, three children were playing in the river, with no adult visible.

There were four cars parked on Housatonic River Road, plus other cars with drivers clearly looking for a place to park. Again, the cars had Connecticut and New York plates, with a couple of cars from Pennsylvania and Virginia.

Better than it had been

On Monday morning, July 20, Falls Village First Selectman Henry Todd said the weekend had been quieter than the previous two.

“I think all we can do is try to make it a little better each weekend,” he said.

“But the state troopers can’t sit there all day. They don’t have the manpower.”

Todd said there are plans to improve signage and barriers.

He said the First Light power company has to add more and better signs, concentrating on garbage and safety, and in English and Spanish.

Rand said the situation is frustrating. “You can’t take the river and the Appalachian Trail away. They belong to the people.”

At the same time, “First Light owns the access” and is obligated to make recreation opportunities available to the public.

State Rep. Maria Horn (D-64) said on Sunday, July 19, that she has been keeping an eye on the situation, especially at the falls.

She also expressed frustration. “On the one hand, people need places to go. On the other hand, we can’t manage it.”

She said the message about river safety and crowding needs to get out on social media, and, echoing Todd and Rand, suggested improved, bilingual signs.

In an interview Sunday, July 19, he noted the widespread closing of parks and beaches elsewhere in the state, and said, “When we give the public no alternatives, we shouldn’t be surprised when they find something else.”

Miner said Winsted and Torrington are having similar problems, with inexperienced swimmers in dangerous areas.

Miner said the state owns “significant waterfront property” and closing or restricting access to them is a mistake.

He said people can use such facilities safely, even during the COVID-19 pandemic, and that having people in dangerous areas such as the Great Falls is not an improvement in the overall scheme of public safety.

Record on bear sightings too

Will Healey, the Public Information Officer with the state Department of Energy and Environmental Protection, said in an email Monday, July 20, “Our Environmental Conservation Police are aware of the increase in use on the river and illegal fishing complaints. We have been patrolling the area, especially Cellar Hole, as officer availability allows.  We are working park public safety patrols, as well as responding to a record number of black bear calls in the area this year.”