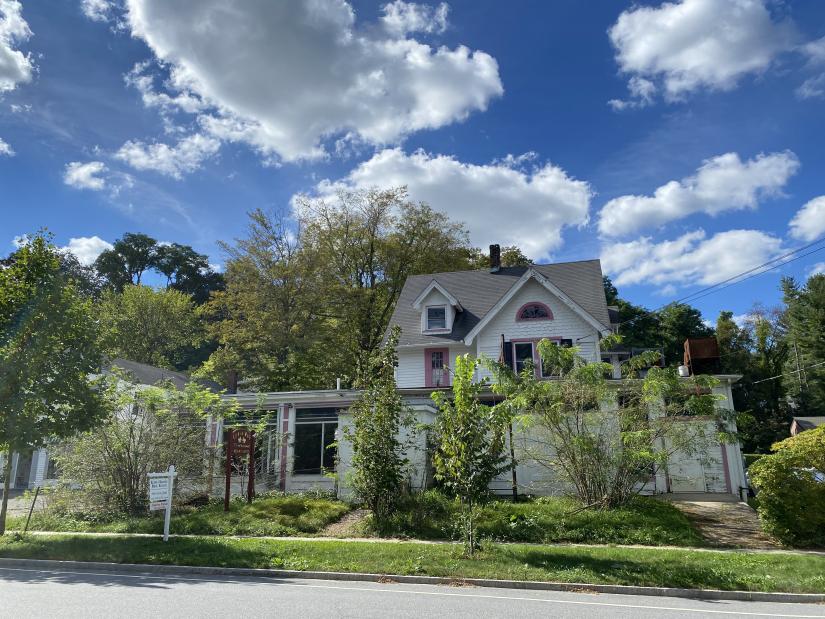 The former Chinese restaurant building on Main Street and its two apartments are now for sale, represented by Elyse Harney Real Estate. Photo by Cynthia Hochswender

A revival in the Lakeville village center

SALISBURY — The former Chinese restaurant on Main Street in Lakeville, a source of community concern for several years now, is now up for sale with a professional real estate agent, Jusztina Paksai of Elyse Harney Real Estate.

Owner Amy Yang had tried for nearly a decade to sell the mixed use residential/commercial property by herself. There had been interest and offers but a sale never happened.

In the meantime, the outside of the building and the half-acre space around it began to deteriorate to the point where community members began to express concern about blight.

Jusztina Paksai and her husband, Endre Molnar, came to Lakeville about four years ago. Since their arrival, they have renovated several residential and commercial properties — including the two white buildings (now called Cobblers Corner) across the street from the Chinese restaurant.

Paksai and Molnar not only fixed up the two buildings at Cobblers Corner, they also quickly found several commercial tenants in what had been a somewhat sleepy Lakeville commercial center.

The couple then sold Cobblers Corner, this year, for $740,000, to a family that is new to the area, who said they will continue to rent out the commercial spaces to tenants who include physical therapist Ellen Walker.

Paksai said that it took about four years of conversations with Yang before she earned her confidence, to the point that Yang was willing to take her on as her agent for the sale of the building.

Response was “almost overwhelming” as soon as Paksai put up a “for sale” sign outside the building. She said she has been showing the property two or three times a week since she listed it in mid August.

On Tuesday afternoon last week, Paksai and broker/agency principal Elyse Harney Morris took a tour of the property with this reporter.

While the building and adjacent barn look daunting from the outside, everything is fairly tidy on the inside. The tables are still set, and ready for service in the restaurant. There are some bits of spilled sauce here and there, but otherwise the interior is in as good shape as it was when the business closed down more than a decade ago.

The two apartments in the building (which was constructed in 1900) are unexpectedly charming, with built-in bookshelves and a fireplace in the downstairs space (three bedrooms, one bathroom). The upstairs space is rambling and quirky, with old-fashioned wood trim and views over Main Street (four bedrooms, one bath).

It all needs work. Yang tried to do some renovations on her own; there are projects that were started and then stopped.

“It’s challenging,” Paksai said politely of the property’s condition. But the owner understands the challenges and is flexible on her asking price of $550,000.

The Lakeville village overall seems ready for a renaissance.

“I give credit to Seth Churchill, who did such a beautiful job renovating the former travel agency across the street,” Morris said.

Churchill,  who is a builder, also renovated the former firehouse around the corner, which is now home to a fitness center and cafe — and is for sale ($1,075,000) with Morris as the agent.

After several years on the market, Morris said, there is suddenly a surge of interest in that building as well.

Morris and agent Tom Callahan also just closed a deal (with Harney agent Juliet Moore, for $600,000) on what has in recent years been the White Gallery but was Joe Jacklitsch’s beloved Riga Roast coffee shop for many years before that.

The new owner is an alumnus of the Berkshire School. As is often the case with buyers in this area, Morris said, “He came here because of the schools.”

He plans to move his wealth management business into the space.

Next door, the former Borden real estate agency is also for sale, with broker Sherie Berk of William Pitt Sotheby’s International Realty in Salisbury (the asking price is $795,000).

“I think we’re going to see more and more of this,” Morris said. “People began to come up here in large numbers during COVID, and that led to a boom in residential sales. Then land began to sell, after it hadn’t sold well for many years.

“Now it’s the commercial properties that are beginning to sell. I think many people who came here to live want to give back to the community and help our towns thrive.”