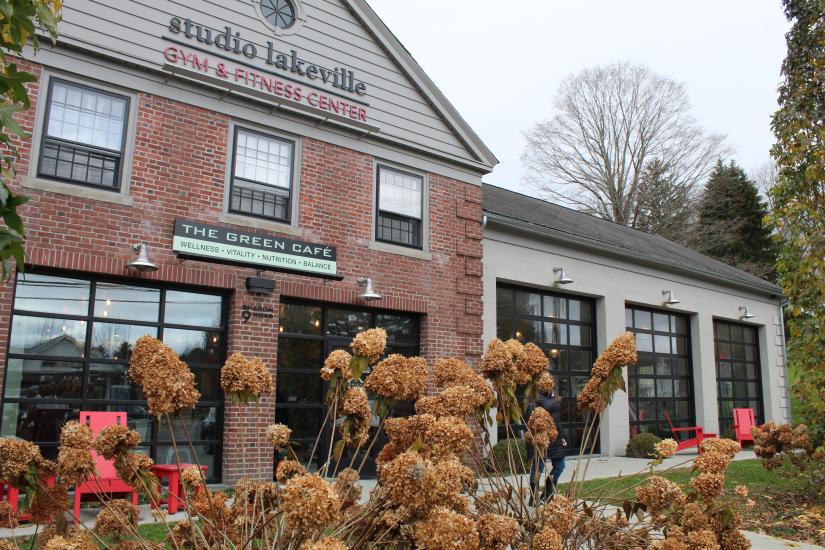 A new restaurant is being proposed for the former firehouse in Lakeville. Photo by Patrick L. Sullivan

SALISBURY — The Planning and Zoning Commission continued until Dec. 13 a public hearing on an application to turn the former firehouse at 9 Sharon Road into a restaurant with an apartment upstairs.

The first session of the hearing on Monday, Nov. 15, raised numerous questions about parking and the impact on abutters.

The building is currently home to the Green Cafe and Studio Lakeville, a fitness center.

Capecelatro said his clients operate four restaurants in New York state. The plan calls for about 90 indoor and outdoor seats for dining and for a two-bedroom apartment on the second floor for workforce housing.

The restaurant would be run by Luciano Valdivia, who has opened Cucina in Woodstock, N.Y., Market Street in Rhinebeck, N.Y., and Barbaro in Millbrook, where Giovanni Scappin is chef. Scappin is also an instructor at the Culinary Institute of America in Hyde Park, N.Y., and would be the chef at the proposed eatery.

Engineer Pat Hackett appeared for the owner of a neighboring building, Pocketknife Square, and initially complained that the notice to abutters was done improperly.

Mark Capecelatro, attorney for the applicant, Firehouse Place LLC, replied that the notices were done properly, and the commission accepted that.

Hackett then spoke about possible impacts on his client’s property, and tried to show various photos and maps to make his points. The commission found it confusing and Chair Michael Klemens and commission member Bob Riva both rebuked Hackett for being unprepared.

There was considerable discussion about the number of parking spaces available, how that number was calculated, and the impact on existing nearby businesses (including several restaurants).

Commission member Marty Whalen noted that the restaurant plans to hire between 30 and 35 employees. Assuming half of them are at work at any given time, he continued, the employees will require roughly 17 parking spots.

The hearing adjourned after about an hour, and was continued to Dec. 13. Klemens, Land Use Administrator Abby Conroy and attorney Chuck Andres will work on a resolution in the interim.

The commission asked the applicant for a clearer site plan that addresses questions on parking, screens and buffers for neighboring properties, loading and dumpster plans, and plans for outdoor dining.