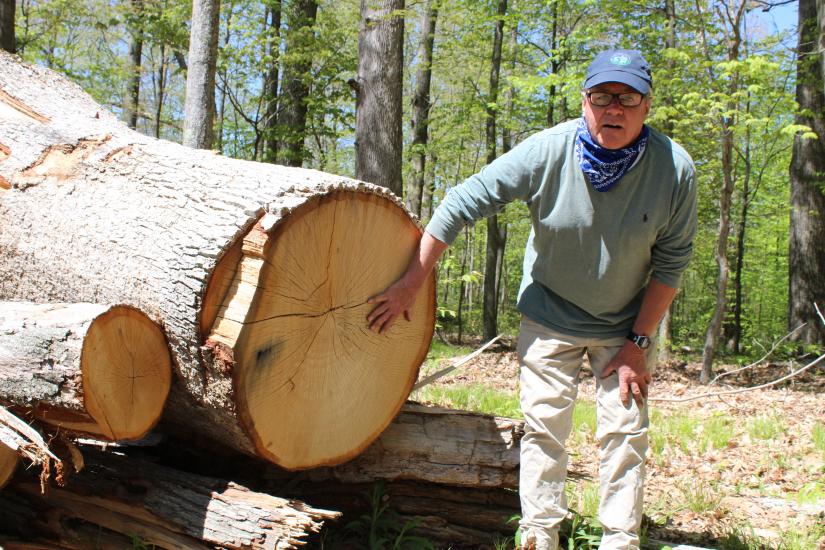 First Selectman Curtis Rand, who is a professional forester, showed one of the fallen white oaks at the Grove in Lakeville. New oaks are being planted there this summer. Photo by Patrick L. Sullivan

Remembering and replacing the fallen oaks at the Grove

May 27, 2020
By
Patrick L. Sullivan
patricks@lakevillejournal.com

LAKEVILLE — Salisbury First Selectman Curtis Rand had a terrific pitch for a story idea: “It isn’t about COVID-19.”

Rand and town Grove Manager Stacey Dodge were at the Grove on Thursday morning, May 21, showing off new-ish white oak saplings.

The new trees are meant to replace the much older white oaks, some of which have come down in recent years.

Rand said the white oaks have a history that’s worth telling.

It is unusual to have trees of the same species and age — 400 years old, give or take a decade — in the same spot. The Grove is named for these trees (it is a “grove” of a oak trees).

It seems to indicate the trees were planted deliberately. And the only people who could have done that were native Americans.

Rand (who is a professional forester and forestry educator) tried his theory out on a Yale professor, who agreed it seemed likely that native Americans, practicing swidden agriculture (aka slash and burn) around Lake Wononscopomuc, planted the trees, which were valued for their acorns, which have a sweet taste and are good for bread-making. The approximate date for this is the early 17th century.

Inside the Grove building is a 1985 project from the late George Kiefer, who analyzed a cross section of one of the white oaks and assigned dates to the rings. The earliest is 1630. Kiefer was the town of Salisbury’s tree warden for many years.

The white oaks come down eventually, usually when the root systems degrade. The trees are top-heavy, and when the roots can no longer support them, they fall down, usually with the help of the strong winds that are a feature of the lake and environs.

To replace the white oaks, Rand has for several years been collecting and germinating the acorns.

The seedlings are planted in the compost pile at his home and get nursed along for up to four years before they are ready to be planted at the Grove.

The wood from the white oaks that have come down is highly prized for use in restorations and replicas of old wooden sailing ships. Rand explained that the wood is highly water-resistant, and the size of the downed trees means larger pieces can be cut.

Duke Besozzi runs New England Naval Timbers out of Cornwall, and is the man Rand calls when a white oak comes down at the Grove.

“Seems like every year or so, a white oak comes down there,” he said.

Besozzi has supplied timber for well-known ships such as the Charles W. Morgan at Mystic Seaport and the Honey Fitz, President John F. Kennedy’s yacht.

One of the Grove oaks now forms the rudder of the Bluenose II, which is the national schooner of Canada.