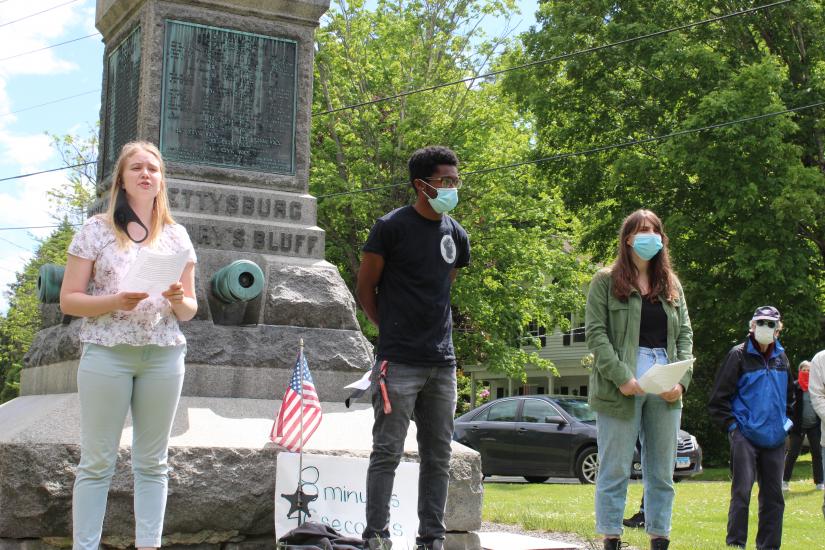 Calpurnia Carter, above left, spoke during a demonstration on the Salisbury Green on Sunday, May 31, protesting the death of George Floyd. Photo by Patrick L. Sullivan

SALISBURY — On Sunday afternoon, May 31, an estimated 250 people carrying signs calling for justice congregated on the Salisbury Green to protest the recent death of George Floyd, who was killed in Minneapolis, Minn., while being detained by police on Monday, May 25.

A similar protest was held on the Green on Saturday morning by the group that meets there weekly to call for peace. Sixteen additional people took part in the vigil.

“Acting on the belief that silence is complicity, area residents demanded justice for the murder of George  Floyd,” said one of the protesters, Amy Lake of Lakeville.

Calpurnia Carter is a rising sophomore at Manhattan College in Bronx, N.Y., who grew up in Falls Village and is a graduate of Housatonic Valley Regional High School. She and two friends planned the Sunday event a day in advance, reaching out across multiple social media platforms.

Her co-organizers were Brynn Scharte and Xavier Johnson, both graduates of Housatonic Valley Regional High School, in the classes of 2019 and 2020.

Each of the three gave a speech at the start of the protest, detailing the recent events and saying why change is needed.

“There is nothing that will ever make the deaths of these people OK,” Carter said, “but by coming together now, we can work to make this country one to be proud of, and one that will one day not take the lives of black citizens in the cruel manner in which George Floyd was killed.”

Johnson expressed his frustration with the multiple police-related deaths in recent years in the U.S.

“Growing up, I was told America is the place where everyone is treated equally and that we are innocent until proven guilty,” said Johnson. “However, what I have been seeing and what I have witnessed first-hand is that we are persecuted from birth.”

The three organizers also stressed that this protest was not anti-police, but rather to honor and remember those who lost their lives and to show support toward the black community.

Carter, Johnson and Scharte read the names of some of the people killed in recent police confrontations, such as Tamir Rice, 12, who was shot and killed by police in 2014 and Keith Scott, 47, who faced the same fate in 2016.

They then called for eight minutes of silence, representing the time Floyd was held down under the police officer’s knee.

One of many in attendance was state Rep. Maria Horn (D-64), who said she was proud of the community for stepping up and standing together.

“On such short notice, to get so many people together in a small town tells you something”  about how much this issue matters, Horn said. “I’m hoping it will start other conversations and get other groups working together to address this problem in a practical way.”