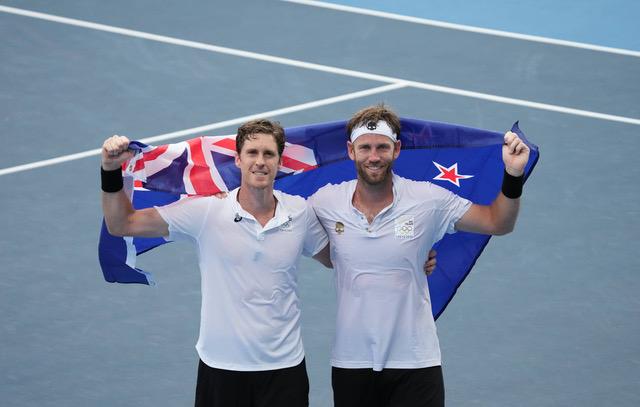 Marcus Daniell, at left in photo, practiced in Lakeville in preparation for his bronze medal win in doubles tennis at the Tokyo Olympics. After retiring from tennis, he will devote his time to philanthropic work. Photo submitted

Practicing on Lakeville’s courts for an Olympic win

SALISBURY — When the men’s doubles duo representing New Zealand earned the Bronze medal during the Tokyo 2020 Olympics recently, the lights were on in Salisbury, signaling a joyous distant connection to the win and all that went into it.

The story begins with the COVID-19 pandemic that brought world-class tennis star Marcus Daniell, representing his home country of New Zealand, to stay with his future in-laws, Kathy and Michael Voldstad in Salisbury. There he would continue his Olympic training as protected as possible from the virus.

Pre-pandemic Olympics plans were built on the expectation that the family would travel to Tokyo, but it was not to be.  Kathy Voldstad shared her memories of her son-in-law’s Olympic victory, viewed on home screens.

“We watched the tennis matches from home,” she recalled. Marcus’ wife of a few months, Caroline, and the Voldstads’ eldest daughter, Katie and her daughter, Sofie (age 15), were home in Salisbury. The match took place in the wee hours so they had all set their alarms, ready to watch on their computers from their beds and exchange inter-bedroom text messages for commentary. Another daughter was watching on her computer from her apartment in Washington, D.C. Many friends around the world were up, watching and texting, Voldstad said.

“When Marcus won the medal match we all met up in the hallway, hugging and jumping and exclaiming over the wonderful outcome,” she added.

Tears and triumph
in Tokyo

Commenting last week on details of that Tokyo win, his training regimen, advice to young tennis players developing their skills, and on his new non-profit enterprise, Daniell shared a wide-reaching perspective.

Paired with doubles partner Michael Venus, together they defeated the U.S. team 7-6 6-2 to earn the bronze medal. Approached by the press immediately following the win, Daniell recalled that he was asked if he had anything to say to those back home. Tears started to flow quite unexpectedly. In retrospect, he said he suddenly visualized all of the people who had helped along the way and made sacrifices to bring him to that victory.

“The medal ceremony in Tokyo was surreal,” Daniell said. “There was a huge group of photographers, but no one else in the stadium.”

He added that he can only imagine what the scene might have been if the stadium had been full of fans.

Asked about future Olympics, Daniell pointed out that the next Olympics in Paris is less than three years in the future, when he will be 34. At any age, a tennis career exacts “a huge toll on the body, the mind, and personal relationships.”

“I’m not yet sure whether I want to continue playing until the end of 2024, but if I do, I think it would be my swan song,” he said.

Reflecting on his months of training in the Northwest Corner, Daniell said he came and went from the area, but was here between April and July early in the pandemic and then on and off as his career permitted. His practice hours were divided between the courts at The Hotchkiss School and the Lakeville public courts.

He noticed that on occasion a few people would stop to watch, but for the most part the charm of being in Lakeville and Salisbury was the relaxed and peaceful practice atmosphere, without what he termed “tennis hype.”

Most of Daniell’s practice time on the court, he said, was spent productively with either renowned coach Edgar Giffenig or Giffenig’s daughter’s boyfriend, Inigo. He adds that his bride, Caroline, should be credited for having filled in on occasion by tossing him innumerable balls during practice.

Caroline and Marcus met five years ago when Marcus was playing in the U.S. Open in New York City and Caroline was a law student there. They were married on a beach in New Zealand in July 2020, witnessed by a handful of Marcus’ siblings and their partners. A larger celebration is planned for the future when the pandemic wanes, Voldstad said.

Turning to advice for aspiring young players, Daniell recalled that he started playing tennis as a toddler, as soon as he had figured out how to walk. However, he began to take it seriously at around 15 years of age.

“Enjoy your childhood and do a range of things before specializing. Tennis is a short, intense career,” Daniell said.  A range of experiences and interests will bring more choices when the tennis career ends.

“He is very thoughtful and intellectually curious and always challenging himself to learn or master something new,” Kathy Voldstad said in describing Daniell, affirming his advice.

“He is also gracious, kind, thoughtful, compassionate — and great fun,” she added. “He makes and keeps friends around the world.”

“Focus is key to improvement,” Daniell emphasized as an additional thought for young players, whether on the court or in the gym. “This takes time and effort to develop, and I wish I had learned it sooner.” He cautioned against “coasting” through practice, “thinking that you are working hard, but you’re really not.”

Developing an idea that dawned in June 2020, Daniell launched High Impact Athletes, his nonprofit organization, the following December.  The organization helps professional athletes and others to direct a portion of their earnings toward selected charities around the world.

“We help athletes (and the general public) find the most impactful donation strategy,” Daniell said. Those strategies take into account tax benefits among other factors. Tax benefits differ among countries, he noted. For example, he receives no benefit if he donates as a New Zealander, but U.S. or U.K. residents can benefit on their taxes from donations.

“After all, if you can realize a tax benefit, you can donate more,” he pointed out, bringing a more positive impact where it is needed in the world.

The charities linked to High Impact Athletes are evaluated and thoroughly vetted, Daniell noted, or donors can choose to donate to the organization’s Maximum Good Fund to divide the donation equally among the charities.

“The organization takes no cut of the donation, meaning that a full 100% of the donation will go to the intended purpose where it can do the most good,” Daniell said.

At first, Daniell recalled, he was approaching athletes to ask them to participate, but now, they are starting to seek him out, a good sign.

“The per-dollar impact a donor can make through the most cost-effective charities in the world is truly staggering, and that’s why I believe High Impact Athletes has the potential to have an extraordinarily large positive impact on the world,” Daniell said.

For more information about High Impact Athletes, go to  www.highimpactathletes.org.