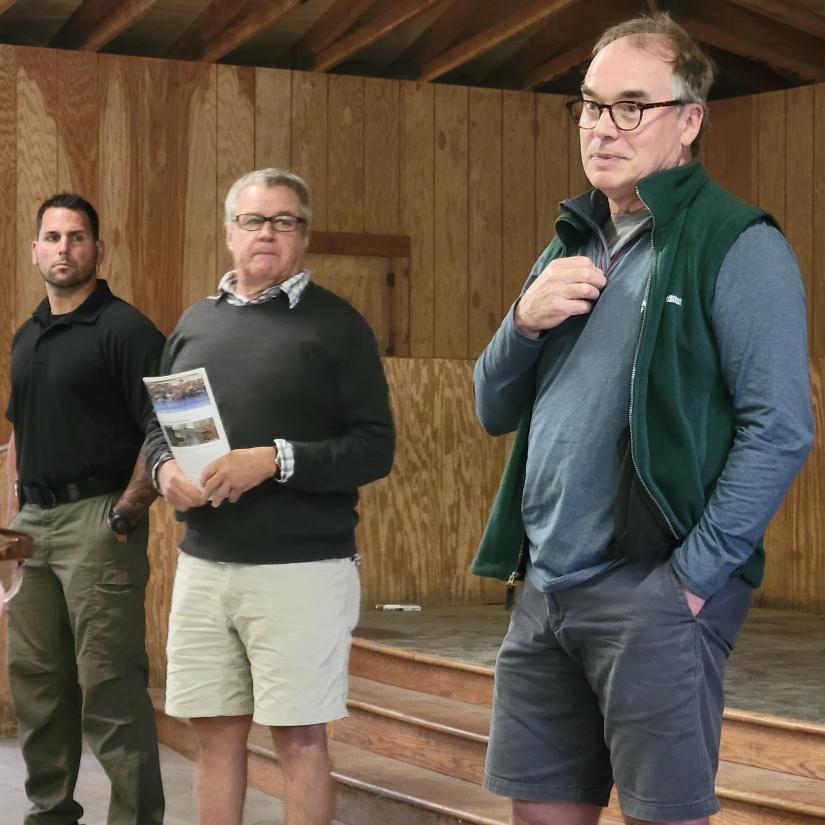 SALISBURY — In response to ongoing noise complaints from lakefront property owners on Twin Lakes, the town has reinstituted a part-time police patrol headed by newly appointed Salisbury Resident State Trooper Will Veras and aided by a staff of two retired law enforcement officers.

The announcement was made during a membership meeting of the Twin Lakes Association (TLA) on Saturday, June 18 at Camp Isola Bella, attended by about 50 people, including First Selectman Curtis Rand.

Rand, Veras and TLA President Grant Bogle fielded questions and complaints, and explained how the program will roll out this summer, with a goal of having it fully implemented next season.

Salisbury lost its town constable due to state cutbacks, forcing TLA members and the town to scramble this year for a way to keep peace while allowing safe recreation on the lake.

“We appreciate the support we are getting from the town in getting lake patrols back this year. It was not easy, and Curtis really worked hard at that,” said Bogle

Veras, who works out of Troop B in North Canaan and lives in Torrington, explained that he will be supported by retired law enforcement officials Al Bison and Marc Puzzo, who bring 55 years of combined service to the job. “Just the presence of them will make a big difference,” he said.

Responding to a question about how often the patrols will monitor lake activity, “My experience has been that we don’t want it to be predictable. Will and Al will figure out what works and what the town budget can support,” said Bogle.

Several residents asked for advice on how to file complaints and who to call when an issue surfaces, since the patrol officers are not local and may not be present when problems occur.

“If there is a significant issue that happens, call 911. If there is anything else, Grant has the phone number for me and my two guys,” said Veras.

Rand, who noted that he “almost got swiped” by a boater recently while in his kayak, suggested that people “keep it as controlled as you can. We will make the phone calls.”

Noise complaints, said Bogle, are difficult to deal with. “The realization is that there is no noise ordinance in Salisbury so what is noise to you or me may not be noise to somebody else.”

The TLA president said he is optimistic the patrol will reduce complaints. “Just the mere presence of having the boat out there slows people down,” he said.

Responding to a question about how to handle disturbances from party boats and late-night revelers, Rand suggested residents gather as much information as possible about the offenders. “If it’s the middle of the night we are not going to get to them, but if you know who it is, we will get to them the next day.”

Veras said there is no one-size-fits-all solution, and that lake residents should “police each other. You can get a plate number of a vehicle at the boat launch, all these little things are what it takes to make change.”

TLA board member Dan Kadlec said he feels that the town needs to take enforcement a step further by adopting a noise ordinance. “We would like an ordinance that allows us to say, ‘Hey, if you don’t cut it out, we are going to have an accident.’ We’d like some teeth so we can take action and so that we are not just ignored.”

Last year, Rand said if the TLA drafted an ordinance addressing noise and safety issues, he would bring it to a vote. At Saturday's meeting, the first selectman explained that even though the town does not currently have the manpower to enforce it, he would investigate bringing a proposed ordinance to a vote.

Karl Anoushian, who owns lakefront property and is an avid fisherman, said, “I have always found that police presence is a deterrent” and works better than “running up to some guy who has a half bottle of Jack in him and saying, ‘Hey, cut it out.’ That doesn’t work.”

Anoushian said times have changed on the lake over the years, and so too, have people’s behaviors.

“It’s not all rowboats and canoes anymore, he said. Jet skis, party boats and blaring speakers all contribute to excessive noise, he said.

This article has been updated to note that First Selectman Curtis Rand would investigate bringing a proposed ordinance to a vote.