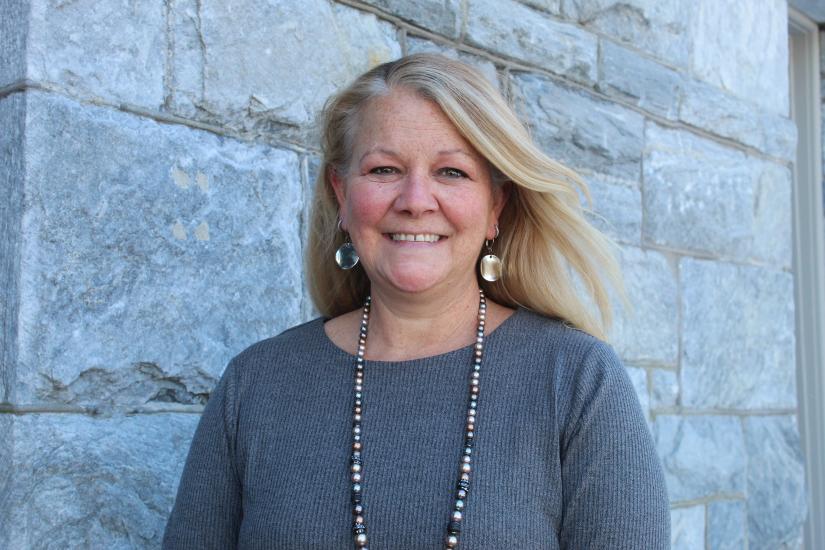 Karin Goodell, the new director at the Scoville Memorial Library, said she is enjoying the process of getting to know the community — and the building. Photo by Patrick L. Sullivan

SALISBURY — Karin Goodell, the new director at the Scoville Memorial Library, said she is enjoying the process of getting to know the town, its people, and the library staff.

The Lakeville Journal dropped in for a visit on Tuesday, Jan. 11.

Goodell comes to the Salisbury library after 14 years at The Beardsley and Memorial Library in Winsted, first as the head of children’s services, and then for a decade as director.

Asked if she has always liked libraries, she replied in the affirmative.

“I like the sense of community,” she said. “The library is the one place that’s open to everyone and offers something to everyone.”

Goodell, a self-described “Navy brat,” spent her childhood in several locations, including Groton, Conn., which has the Groton Public Library and the architecturally impressive Bill Memorial Library.

“I love old libraries,” Goodell said. “I love the sense of wonderment.”

Goodell’s been exploring the “nooks and crannies” at Scoville, including the collections from the original library.

And she’s been coping with the inevitable difficulties that come with old buildings, including some recent water damage on the lower level.

Goodell does not have any major initiatives in mind just yet. The library is looking for an adult programming coordinator. (Retired Scoville Library Director Claudia Cayne is filling in on an interim basis.)

The ongoing COVID-19 pandemic is on everyone’s mind, she said. The library requires masks and social distance when inside.

“But people are still coming in.”