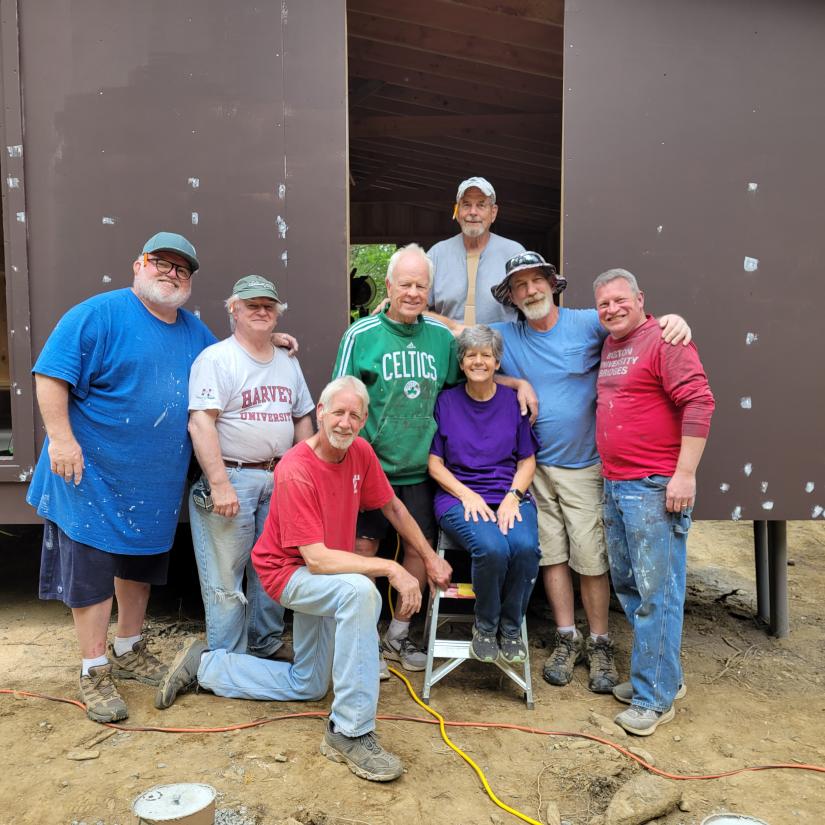 Jeff Bravin, executive director of the American School for the Deaf, far right, posed with alumni of historic Camp Isola Bella on East Twin Lake in Salisbury on Thursday, May 26. The historic camp is undergoing a $700,000 expansion and renovation with alumni volunteering sunrise to sunset to get ready for campers on June 25. Photo by Debra A. Aleksinas

SALISBURY – Over the past few weeks, Camp Isola Bella on East Twin Lake was alive with the sounds of saws buzzing, hammers pounding and the drone of massive cement trucks. However, for the 16 volunteers working on the island from sunrise to sunset, there was only silence.

The historic camp property, owned by the American School for the Deaf since 1963, has undergone a $700,000 expansion and renovation, and the alumni who toiled from sunrise to sunset on the last leg of the construction project were all former campers, including ASD’s executive director, Jeffrey Bravin.

Bravin, who is in his ninth year as the school’s administrator, and 20 years with ASD, used sign language as his interpreter, Marie Langill, spoke. He explained that the long-overdue expansion will allow the West Hartford-based school to welcome an additional 75 campers to Isola Bella every summer, a 63% increase.

“We had talked about it for years, and now is the time,” he said during a late afternoon visit on May 26 during which he took a break from painting the exterior of a newly built cabin to reflect on the camp’s increased demand and long waitlist, its link to the community and the Twin Lakes Association, and the lush island’s long and storied history.

The goal of the alumni, he said, was to have the property ready for 125 youngsters, ages 8 through 17, who will converge on the island in three groups beginning June 25, the opening day of the five-week camp season.

The 125 campers will not be all converging on the island  on opening day. Three groups totaling 125, are expected during the 2022 camp season.

“They work sunrise to sunset,” noted Bravin, pointing to his work crew as the skies darkened overhead and a brisk breeze blew off the lake. “They are up at 6:30 a.m., eat breakfast, are out the door by 7, and I never know when they are going to finish. They are just so committed.”

The executive director also ditched his shirt and tie for the occasion.  “As you can see, I’ve been painting,” he said a broad smile and pointing to his paint-spattered jeans and sweatshirt.  “Hopefully we will be done by next week. Fingers crossed on that.”

The expansion/renovation includes construction of two handicap-accessible cabins, the renovation of two existing bathrooms to include handicap shower and toilet facilities and ramp access, renovation of the old bunk houses, enclosure of a covered patio to increase dining space and replacement of the camp’s pavilion roof.

The project also allowed for a multi-use sports court —the concrete was poured the prior day—and a major electrical and Wi-Fi upgrade.

One of only six camps of its kind in the U.S.

ASD is the only school for the deaf in Connecticut and is the oldest school of its kind in the United States. ASD operates one of only six summer camps in the nation that serves deaf and hard-of-hearing children, children of deaf adults or siblings and, as of two years ago, those on the autism spectrum

Campers come from all over the U.S and on average, nearly 70% of them return for more than one season. Reunions and other events draw campers back year after year, according to ASD.

In addition to the 29-acre island, the school also owns a large field on the mainland, which brings the school’s total land ownership to 52 acres, Bravin said. “We call it Primos. That was the name of the caretaker for the Alvord family” who were among the island’s succession of owners.

Bravin said the school has been working collaboratively with the Twin Lakes Association (TLA) for nearly a decade. “They have been so supportive and it’s such a wonderful community. They worked with the school in 2013 to renovate the stone tower,” a project with a price tag of $200,000. “They paid half and we paid half,” he said.

“So when this project started, I spoke with them again and asked if they would help support it, and they came up with a very quick ‘yes,’” said Bravin, adding  that the Twin Lakes Association “raised a lot of money for us.”

Bravin credited the association’s president, Grant Bogle, for his “unbelievable support. He’s committed not only to the lake community, but also to Camp Isola Bella.”

Bogle, he explained, serves as a trustee on the ASD Board of Directors, and “and I serve on the Twin Lakes board.”

Bogle, who owns lakefront property on East Twin Lake, said the camp is “truly a treasure” not only from a nature and historical perspective, but also in way it has enriched the lives of countless young adults over the past half-century.

“We raised funds locally which were combined with funds raised from alumni and other sources in Hartford and a state grant,” said the TLA president.

A typical day at the camp

Camp Isola Bella offers the same physical activities as any other summer camp. The difference is that on this appropriately named “beautiful island,” youngsters get to be with their peers. The camp, said Bravin, also plays an important role in a child’s social development, all executed with the needs of deaf students in mind.

“Obviously we want the campers to have fun, but at the same time, most deaf and hard-of-hearing children, about 90 percent, come families that can hear, so communication is a challenge for these children.” He also noted that many hail from urban areas. “We want them to continue to learn and experience nature.”

Activities such as experiential learning, teamwork, communication and cooperation, and literacy initiatives are integrated into daily programming. Classes in boating, archery, arts and crafts and camp studies define a typical day at the camp. In the afternoons, campers also spend time focusing on team building, self-esteem, cooperative games and problem-solving skills.

One of first campers
returned to help

Using sign language, Wesley Miller explained that he is a 1970 graduate of ASD and was among the first campers to set foot on Isola Bella when it opened in 1964. He returned in 1965. “I look back at the time I spent here, and I want the kids of today to experience what I did,” said Miller, noting the reason he volunteered.

Bravin explained that Miller is a former construction company owner. “So, when I started this project, I felt he would be a great leader. I call him our foreman. He heads our team here.”

Nearby, Alexandra MaGee, who attended camp in 1971 and 1972 and is the former president of the ASD Alumni Association, explained that Isola Bella is more than a camp experience, it part of her being. “ASD and Isola Bella live in my heart,” she signed.

Mark Drake of Drake & Sons in Granby is the general contractor for the Isola Bella renovation project.

“I was surprised when I was told I was getting 16 volunteers. I had no idea what I was getting into,” he said. “Then all of a sudden I got an established work crew. They are so dedicated to the school and the camp. They are a Godsend.”