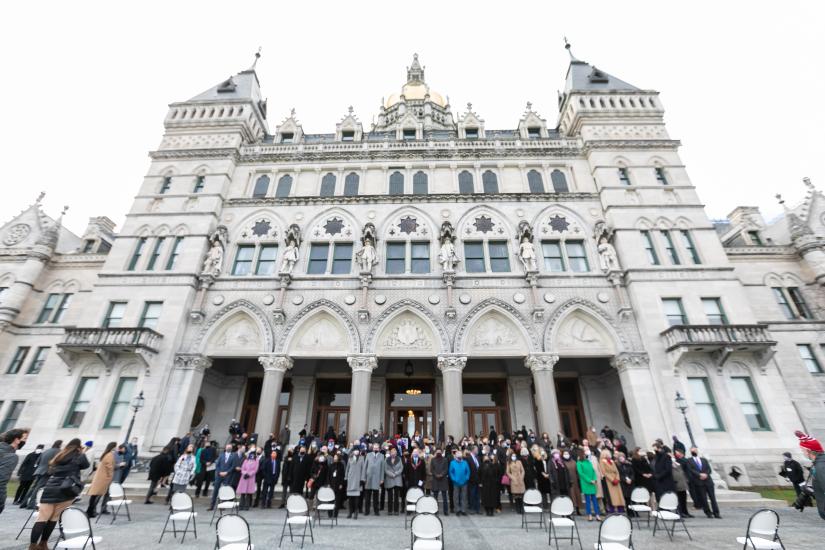 State legislators were sworn in during a chilly but relatively peaceful ceremony on Wednesday, Jan. 6. The roughly 500 protesters who came out were mostly concerned about responses to COVID-19. Photo by Brian M. O’Connor

In Hartford, relative peace on first day of session

Murphy wrote, in part, on Jan. 6: “Peaceful protest is deeply patriotic. Insurrection is sedition, and those that are taking part today in the attempted takeover of the Capitol, including the destruction and desecration of our nation’s temple of democracy, will be held accountable.

“But make no mistake—these traitors will not stop the business of democracy. We will get back to the work of certifying the transfer of power as soon as possible, and we will find a way to find strength amidst this horror.

“We will rise from this dark day as a nation. I am sure of it,” he concluded.

Also on Jan. 6, Hayes wrote, in part: “Today, violent rioters breached the United States Capitol Building in response to what should have been a ceremonial verification of an election. Enabled and incited by the President, and with intentions to discredit our Democracy, sow fear, and incite violence, these rioters stormed the United States Capitol. This disgraceful mob assaulted Capitol Police officers, vandalized the floor of the United States Senate, attempted to break into the House Chamber in an armed standoff, broke Capitol windows, destroyed property and forced the campus into lockdown. The lives of my colleagues, law enforcement, Congressional staff and even the protesters were put in danger today by this assault on the rule of law.”

“These actions are an affront to the American people, to our democracy, and to the sacred nature of our electoral system. While voters have a right to be disappointed at the outcome and even a constitutional right to dispute the results, they have no right to violence or to violate the American tradition of a peaceful transfer of power.

“In my nearly 15 years of teaching American history, I could have never found the words to explain this act of sedition to my students. The damage that this President and these rioters have done to our democracy is incomprehensible. The work of repairing the chasms in our electorate and faith in our republic rests squarely on our shoulders.”

On Jan. 7 Hayes also called for the removal of Pres. Donald J. Trump, either by invoking the 25th Amendment or impeachment.

It was a different and calmer scene at the state Capitol building in Hartford earlier on Jan. 6, as members of the Connecticut General Assembly gathered outside to be sworn in.

The decision was made to perform the ceremony outside in order to maintain social distance.

There were protesters at the state Capitol too, estimated at 500. Those protesters seemed more focused on COVID-19 issues than on the federal election.

The police couldn’t do anything about lung power, however. Horn said it was difficult to hear the speeches, and lawmakers subsequently went back to their offices and heard the speeches again online, as well as a prerecorded message from Gov. Ned Lamont (D).

“We definitely heard them,” Horn said, referring to the protesters.

State Sen. Craig Miner (R-30)  said he wasn’t particularly happy with the outside arrangement, for the obvious reason: It was cold and windy.

He also thought having the legislators gathered with their backs to the protesters was an unfortunate look from a symbolic standpoint, as well as from a safety perspective. He said the demonstrators were about 25 or 30 yards away from the legislators, with the police in between.

Miner said he thought the senators, at least, could have been sworn in indoors on the Senate side of the building, where there is “plenty of room.”

“It would have been safer — and warmer.”

The ceremonies, such as they were, wound up around 12:30 p.m., well before events spiraled out of control in Washington.

Looking ahead to the session, Horn said there is a longer deadline (Jan. 22) than usual for submitting bills and added that the Legislature is still largely reliant on paper copies, despite the increased use of digital technology over the previous year in response to pandemic restrictions on in-person meetings.

Miner said he spent most of Friday, Jan. 8, watching Environment Committee  business in 20-minute chunks on his cell phone. He said the procedure worked reasonably well and is an improvement in one respect: People wishing to address the committee can do so from home, rather than traveling to Hartford.