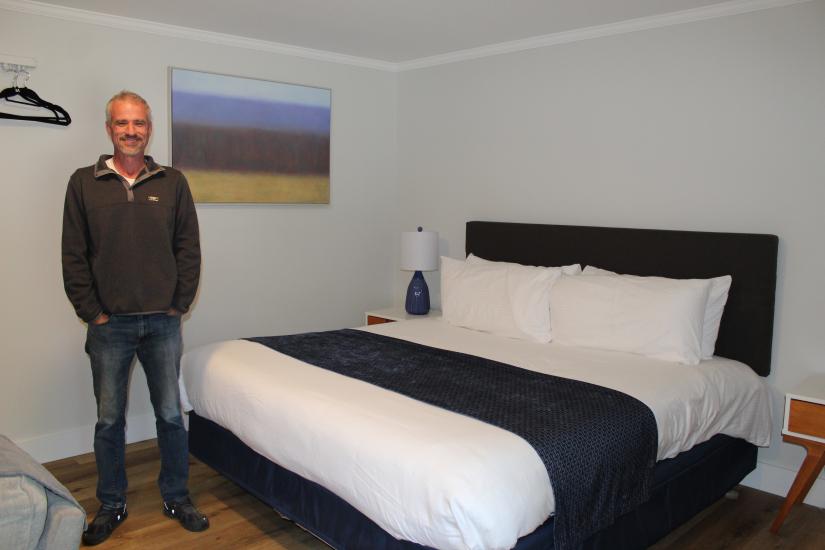 Rory O’Connor and one of the newly renovated rooms at the Iron Masters Inn on Main. Photo by Patrick L. Sullivan

SALISBURY — The Iron Masters Inn on Main — 229 Main St. in Lakeville, to be exact — is now renovated and open for business.

New owner Rory O’Connor of Lakeville bought the property in April 2021 and with his son Rory Patrick O’Connor and friend Nina Khatashvili, has been busy replacing carpets, upgrading the WiFi, and a thousand other things.

A reporter (who happens to live next door) took a tour on Monday, June 20.

Asked about the increased number of cars in the parking lot overnight, O’Connor said that core clientele, such as parents of private school students and patrons of Lime Rock Park, have been returning to the hostelry as word of the new ownership and renovations spread.

The major project remaining is the lobby area.

Everything else is clean and tidy.

The bedrooms are adorned with landscapes by Lakeville artist Karen LeSage.

O’Connor said Khatashvili handled the design elements, and he and his son, with a small army of contractors, handled everything else.

(As the tour progressed, the younger O’Connor was busy with a backhoe, ready to plant a new tree.)

O’Connor said while materials were expensive, he did not have a problem finding contractors. The renovation proceeded three bedrooms at a time.

Rooms start at $199 per night, and should a guest require assistance, O’Connor lives a couple hundred yards away.

O’Connor was optimistic. “We had a good season last year, and we’re off to a better start.”