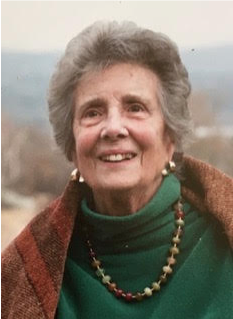 The youngest of four sisters, she attended Foxcroft School in Virginia, which she hated. At Bennington College, on a blind date, she met Donald Hewat whom, after a diversionary trip to Paris arranged by her mother, she married. In 1953 they moved from New York to Salisbury and established a home on Selleck Hill that over time included a small milking herd, five children, hundreds of houseguests, and a succession of noble, affectionate shepherds.

Resolutely liberal-hearted and sensitive to injustice of all kinds, she was fiercely committed to the causes of civil, social, women’s and gay rights. She attended marches against the Vietnam war, years of weekly protests against nuclear proliferation, and campaigned tirelessly for progressive candidates both local and national. She began and ran the local chapter of PFLAG.

She was passionately committed to Salisbury. Over her 68 years in the community, she supported an extraordinary number of local organizations and endeavors, often serving as a board member or volunteer in addition to her charitable contributions. She especially valued programs concerning the town’s youth, the Salisbury Summer Program and the robotics program at Housatonic Valley Regional High School. Intrigued by the robotics classes, in part because they included so many young women, she gave an essential gift toward the building of the Mahoney-Hewat Science and Technology Center. In doing so, she provided an opportunity for students of science that she wished had been available to her.

She had a quiet, understated demeanor, modest tastes, and a stylish, artistic eye. A member of the local Fiber Arts guild, she developed a painstaking technique with silk thread —100 to the inch — weaving refined scarves of classical simplicity and elegance. Though she regularly downplayed her skill, imagining faults where there were none, weaving was one of her great joys.

She surrounded herself with flowers, both those she grew and Anemones, which she adored. She was a consummate hostess, welcoming all guests with an easy grace, sympathetic attention and delicious food.

Generous, modest to a fault, fair-minded, soft-spoken, she rarely spoke against another — with the exception of one local nemesis and the several cross-party presidents she worked to unseat.

She is survived by five fortunate, grateful children, three grandchildren and two great-grandchildren. A date to celebrate her life, and that of her husband’s, has yet to be determined.