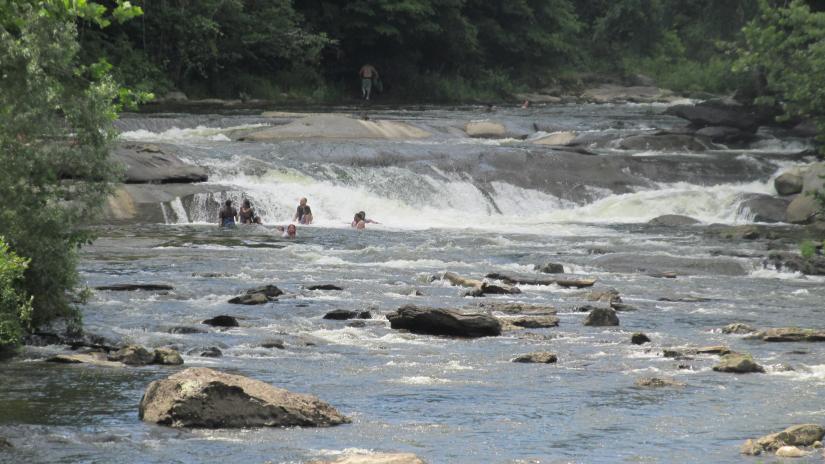 Despite signs saying that the Great Falls on the Housatonic River are closed to the public, visitors pushed aside caution signs and went around closed gates. Photo by Patrick L. Sullivan and Alexander Wilburn

Despite dangers and signs, crowds at the falls

The Housatonic River at the Great Falls is between the Amesville section of Salisbury on one side and the town of Canaan (Falls Village) on the other.

The water below the falls moves very quickly, with cross currents and with plenty of rocks and hollows under the surface of the water that create suction and whirlpools. In recent years, there has been at least one drowning death every year or two in the river here or in Kent near Bull’s Bridge.

On a normal summer day, the falls in both towns attract dozens of people to the shores of the Housatonic River seeking to escape city heat by swimming and having picnic meals by the side of the river. Trash and noise and unsafe parking have been significant problems in Salisbury, Falls Village and Kent, to the point where Kent has taken extreme measures to close off access points to the river.

The water on its own is dangerous. The Housatonic at the Great Falls is a Class 3 rapids; according to www.paddling.com, Class 3 indicates “numerous high and irregular waves; rocks and eddies with passages clear but narrow and requiring experience to run. Visual inspection required if rapids are unknown. Open canoes without flotation bags will have difficulty.

“These rapids are best left to canoeists with expert skills.”

Adding to the complexity of the water there is the presence of the First Light hydropower dam. Sometimes the power company “diverts” water from the river to generate power; at those times, the water level is low and the large rocks are exposed. But when the water is no longer diverted, as was the case the last two weekends, the river reverts to its fast-flowing Class 3 state.

This year, with much of Kent closed off and with the COVID-19 quarantine forcing people to seek social activities out of doors, the Great Falls in Salisbury/Falls Village has seen extraordinary use, problematic amounts of litter and unsafe parking and at least one water rescue.

The most recent was during the July 4 weekend, when a young boy was carried away from his parents by the fast-moving water. The boy managed to grab onto a rock; he was rescued from there by volunteers from Salisbury, Falls Village and North Canaan.

In response, the first selectmen of Salisbury and Falls Village contacted First Light and asked them to close off the access points to the river, including the parking area and boat launch beneath the falls and the iron bridge, across from the power plant.

At 2:30 p.m. on Sunday, a sawhorse and caution tape at the entrance to the picnic area and boat launch had been moved out of the way, and the parking lot was overflowing. Several groups of people were observed having cookouts, while others wandered around or made their way into the falls.

The First Light power station was not diverting any water, so the flow in the falls and river was robust.

Approximately 50 cars (and half a dozen motorcycles)  were parked along Housatonic River Road on the Amesville side of the river, from the intersection with Dugway Road up past the locked gate to the boat take-out area above the dam.

Cars were parked a few yards from signs reading “No Parking Either Side” and in front of caution tape and a large sign reading “Area Closed.”

On the Falls Village side, another 20 or so cars were parked by the bridge, where there are no signs.

And at the Appalachian Trail parking lot a short distance away on Water Street in Falls Village, one of the cones and the caution tape had been moved and someone was having a picnic.

All told, there were about 100 cars parked in the area.

There were very few people observed wearing masks. There were a lot of family groups, judging by the number of children. Many were lugging coolers and blankets, and crossing caution tape to get to the trails leading down to the falls.

In recent years, new trails have been created by heavy use as visitors slide down the hillside to get to the base of the falls.

First Selectman Henry Todd of Falls Village said on Monday morning, July 13, that  he went down to the falls on Sunday around noon.

He said the town is going to put signs up on the Falls Village side to try and get the message out.

He added that the overcrowding makes it difficult for emergency vehicles to operate.

Todd said he was trying to get First Light officials on the phone.

On Monday afternoon, July 13, Rand said in a phone interview that he has now asked First Light to close off the picnic area and boat launch on Dugway with something more substantial than sawhorses, traffic cones and tape.

He also asked First Light to put up “No Parking” signs along Dugway from Brinton Hill Road to Sugar Hill Road.