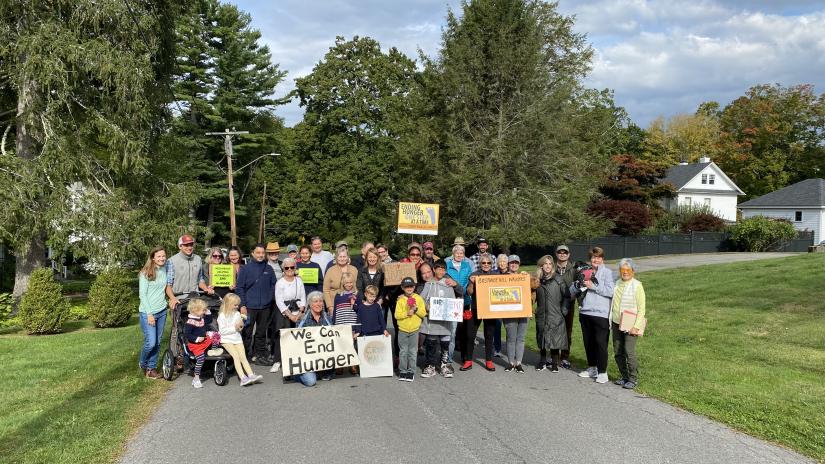 This year’s CROP Walk to end world hunger started out on Lakeview Avenue in Lakeville. The group did a roughly 1-mile circle of the neighborhood. Photo by Cynthia Hochswender

CROP Walkers help to end hunger one mile at a time

LAKEVILLE — For decades, the CROP Walk organized by local clergy and churches was one of the biggest fundraisers in the Northwest Corner.

Hundreds of volunteers, including many from local schools, would gather in front of Housatonic Valley Regional High School and set off for a walk that varied in distance but has been as long as 10 miles and as short as a half mile (for less able walkers).

As with so many traditions, the CROP Walk shrank in size over the course of the past couple years.

This year, Jo Loi of Lakeville decided to revive the tradition on a smaller scale. One of the original participants of the walks (which began here in 1983), Loi contacted many of her neighbors, appointed several block captains and had everyone meet up on Sunday morning, Sept. 25, on a lawn on Lakeview Avenue in Lakeville.

About 38 people (and a half dozen dogs, large and small) showed up and did a tour of the neighborhood that roughly included all the streets that are open for the annual Salisbury Trick or Treat event on Halloween.

Loi said that more than $2,000 was raised. Twenty-five percent will go to local food banks and churches; the rest will go to Church World Services, to be distributed especially to people in countries who still must walk miles to get fresh water every day and for whom starvation is a daily fact of life.

The walk gave neighbors a chance to meet up and catch up with each other; many who had bought their homes during the COVID crisis had never met the families who live across from and beside their new homes.