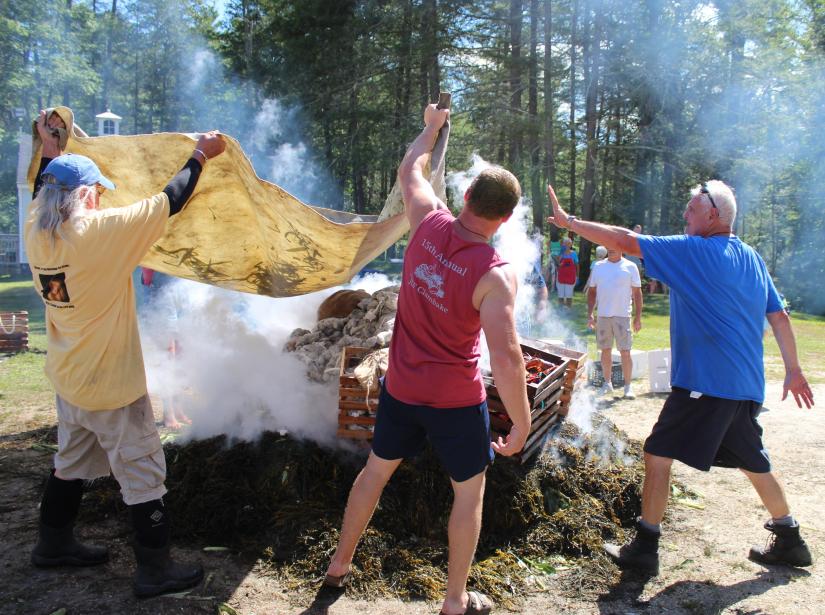 Ray Zukowski (right) directed volunteers in the proper placement of wet, heavy tarps over the pile of hot rocks and bivalves at the Jane Lloyd Fund clambake in Salisbury Saturday, July 30. Photo by Patrick L. Sullivan

SALISBURY — The annual clambake (and fundraiser) for the Jane Lloyd Fund returned to Satre Hill in Salisbury Saturday, July 30, after a two-year hiatus.

Around 10:30 a.m. volunteers buzzed around getting things ready.

Like everyone else, he was eagerly awaiting the arrival of the clambake pros from Massachusetts.

“The first time I saw the fire I thought ‘this is awesome,’” he said as he poured a quart of half-and-half into the immense pot of simmering chowder.

Eliot Osborne and company got started with the live music, beginning with a rendition of Bob Marley’s “Three Little Birds.”

Around 1:30 p.m. the pros from Turners Falls Schuetzen Verein in Gill, Massachusetts. had indeed arrived and were building the edifice for the fire.

This is a layered structure of 4 x 6 inch lengths of wood with flat boards inside to hold rocks. Ripped-up cardboard boxes serve as kindling.. The kindling and boards burn up, leaving a pile of hot rocks inside the charred structure.

Ray Zukowski and the crew pulled the structure apart, and then the second part of the process began.

Crates containing lobsters were added, along with bags of clams and corn.

Zukowski, an imposing figure, loomed through the billowing steam, directing the volunteers.

Finally, wet, heavy tarps were pulled across the steaming pile.

Then everybody sat down and waited in bivalvular anticipation.

Jane Lloyd of Salisbury died of cancer in 2005. The Jane Lloyd Fund was subsequently established by her family to help families in the Region One area who are struggling financially with the costs of cancer treatment. It is an endowed fund within the Berkshire Taconic Community Foundation.