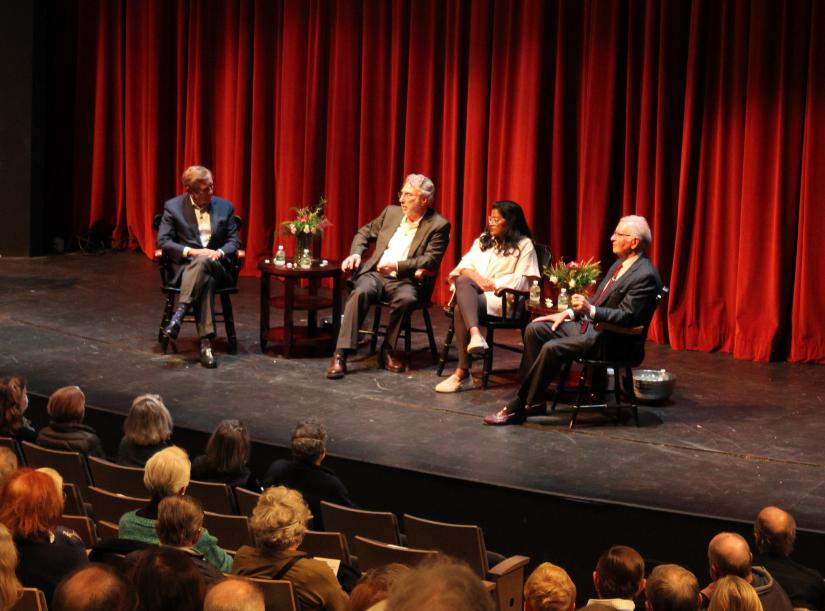 LAKEVILLE — The Salisbury Forum hosted “The Future of American Journalism,” a panel discussion with four veteran journalists, at The Hotchkiss School on Friday, Sept. 16.

The event was part of the celebration of The Lakeville Journal’s 125th anniversary and drew an audience of more than 300.

Ross, a member of the Lakeville Journal Foundation  board, started off asking about the panelists’ news habits.

Baron said, “I’m totally online.” He reads The Washington Post, The New York Times, The Wall Street Journal and The Berkshire Eagle, subscribes to a Bloomberg newsletter, and regularly reads The New Yorker and The Atlantic.

“Hardly any television,” he added.

De said she does watch TV news, follows social media, listens to the radio and reads major newspapers, “but not a daily set.”

“I mostly need to know where people are.”

Coston, a part-time farmer, said the first thing he does is “make sure the sheep are in the pasture.”

Then he takes in a mix of local, national and international news, from The Journal, Post, Times, CNN, Fox, PBS, the Northwest Corner Chatter Facebook page, the Waterbury Republican-American and the Hartford Courant.

Ross asked about the Post’s slogan, “Democracy Dies in Darkness.”

“It wasn’t me pressing for it,” said Baron. He said Post owner Jeff Bezos wanted a memorable slogan, and it took a year and a half to come up with something.

Ross asked if the slogan was a defensive response to the Donald Trump presidency, and to the president’s harsh words for the press, such as “enemy of the people.”

Baron said no. “We were working on it well before he was elected.”

He said people assumed the slogan was directed at Trump, and when Joe Biden won the 2020 election, it was suggested that the paper could drop the slogan as no longer necessary.

De said in her experience Washington reporting was conducted in something of a bubble. “VICE was never in the bubble. Our motto is ‘Breaking the News.’”

Ross asked if the idea of balanced reporting, in the sense that each side gets a say, is outdated. De said “the story gets the say.” She said most of VICE’s audience is under 30 years old. “Every story needs to get that full treatment.”

Coston was asked about working at The Lakeville Journal, “still in existence.”

“We have to produce a paper that people have to have, said Coston. “One that truly reflects what the community is all about.

“We have to be neutral, and give everybody their say.”

“We are the training ground for future journalists.”

Asked about press being neutral “or more proactive,” Baron said, “I don’t like how these things are framed.” He said he sees the job as collecting facts, asking questions and, while keeping an open mind, writing “the totality of it and tell people what the story is.”

“There are always more than two sides, so I don’t think in terms of neutrality.”

Ross observed that “no president has loved his press coverage,” but Trump took it further, going after Bezos’ primary business, Amazon.

Baron said it was not a surprise, given that Trump routinely announced his plans on Twitter. Trump “interfered” with a $10 billion Department of Defense contract that ultimately went to Microsoft Corp., not Amazon.com Inc., Baron added, but it made no difference to the Post’s coverage.

“Bezos did not intervene or interfere” with the Post. “He let us do our job.”

Ross said that Trump’s “enemy of the people” description of the press gained some popular support.

De said that news organizations in general have experienced “a separation from people,” and added that most outlets have had to make do with fewer resources.

Asked about younger and/or aspiring journalists, Baron said he has found, to his surprise, “tremendous interest” in the profession. “I detect a different posture” in younger reporters, he continued. “They do want to express themselves. We were trained not to express ourselves.”

“So what were your rules?” asked Ross.

Baron said Post reporters are expected to use “care and restraint” on social media, and to not participate in protests, and not donate to causes. He said most observed these limits but a few did not, which he found unacceptable.

“If you want to express an opinion there are many other options. It’s not our role as a news organization.”

“It is different,” she said. “It’s personal, relational. It’s still journalism but it feels different.”

Coston said “to some degree the more prevailing issue is young journalists think it’s OK to ‘round off the numbers.’ In a small community you can’t get away with it.”

Asked about the value of community journalism in smaller communities,  Coston cited First Selectman Gordon Ridgway of Cornwall. “Gordon said The Lakeville Journal is why we have a ‘Northwest Corner.’”