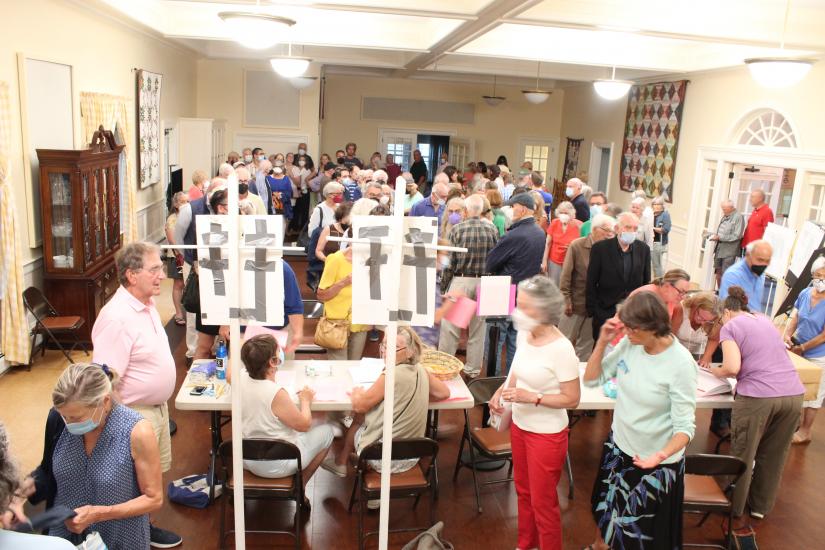 Voters waited to check in at the town meeting in Salisbury Thursday, July 28. The meeting started about 40 minutes late because of the heavy turnout. Photo by Patrick L. Sullivan

SALISBURY — By a vote of 291 to 50, Salisbury voters approved a resolution allowing the Salisbury Housing Committee (SHC) to use town-owned property for access for a proposed affordable housing development at town meeting Thursday, July 28.

The town meeting was held in the Salisbury Congregational Church, which was sweltering. It was scheduled to start at 7:30 p.m., but the heavy turnout meant things didn’t kick off until 8:07 p.m.

The question was called at 8:52 p.m., and it took until 9:15 p.m. to count the paper ballots and announce the result.

The discussion included brief remarks from members of the SHC, reminding voters that access to the site is a necessary first step for applying for grants to do environmental and traffic studies and start designing the housing.

There were voices in opposition, saying there are better sites in town that are mentioned in the town’s affordable housing plan.

Others expressed opposition on environmental grounds.

Several speakers noted that by approving the access, the town is not approving a specific housing development, but simply allowing the process to move to the next step. Any plan still must go before the Inland Wetlands and Planning and Zoning commissions.

Sally Spillane, the immediate neighbor of the site, said her expectation is that the SHC will come up with a  “really good project for our neighborhood and our town.”

Tom Morrison, speaking on behalf of the Republican Town Committee, called a yes vote on the resolution a “no-brainer” and warned that if the town does not hit affordable housing targets, private developers or the state government will step in.

After about 30 minutes of discussion, the question was called. Many people filled out their ballots, turned them in, and left before the meeting concluded.

Those who remained hung around and chatted while the votes were counted.