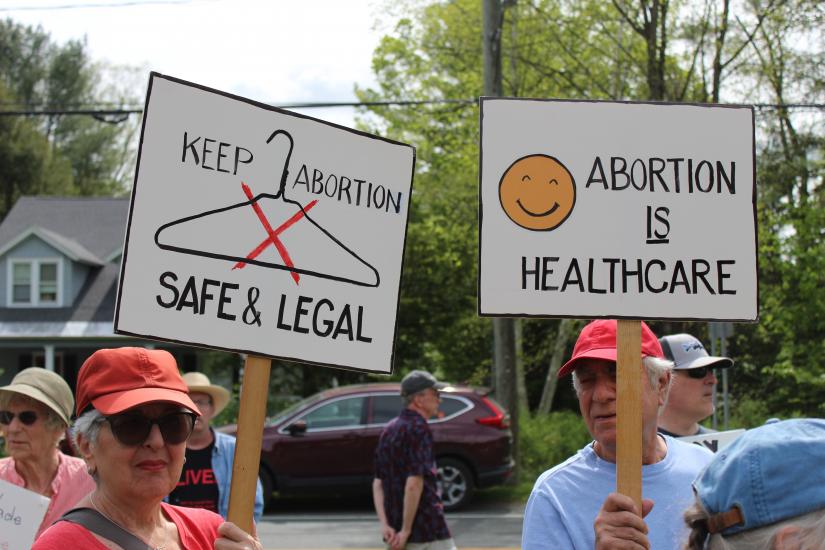 Homemade signs were everywhere Saturday, May 14, in Salisbury at a rally protesting the possible overturning of the landmark Roe v. Wade decision. Photo by Patrick L. Sullivan

SALISBURY — A robust and vocal crowd of at least 200 people came to the Green in Salisbury Saturday morning, May 14, to decry the apparent demise of the 1973 Roe v. Wade Supreme Court decision that legalized abortion nationally.

Maltby said it is important “to protect women’s autonomy,” and to fight against “the clock going back 50 years.”

“Let’s spend a little time raging and then move to what we came to do,” she added.

Maltby described the five Supreme Court justices thought likely to vote in favor of overturning Roe as “religious fundamentalists” and suggested that people read Margaret Atwood’s “The Handmaid’s Tale” (or watch the television adaptation) to see what might happen in a post-Roe world.

Maltby also wondered if Republicans who publicly oppose abortion do so out of conviction or for political advantage.

“Fortunately we don’t have to worry so much in Connecticut” if Roe is indeed overturned and the states create their own abortion regulations.

DeBoer contrasted the positions of pro-life politicians with their positions on gun control (or lack thereof), singling out Texas Gov. Greg Abbott and Florida Gov. Ron DeSantis, both Republicans.

State Rep. Maria Horn (D-64) noted that the right to privacy on which the Roe decision was based was established by the 1965 Griswold v. Connecticut decision involving contraception.

Horn said the Connecticut General Assembly (CGA) “codified” Roe back in 1990, when many people thought it was unnecessary to do so.

She was critical of a recent bill in the Texas Legislature which allows for legal action to be taken against people who assist women in obtaining abortions, and noted that the CGA just passed legislation that  protects such people against judgments from other states.

Horn urged the crowd to remain vigilant and to vote. She said the overturning of Roe could result in infringements on a wide variety of things, such as interracial or same-sex marriage, and even voting rights.

And she said that it is untrue that most Americans are uninterested in the controversy over Roe v. Wade and the future of abortion.

“I am hoping that this is a galvanizing moment for all of us.”

At one point during Horn’s remarks, a woman called out that being “pro-choice” doesn’t necessarily mean being “pro-abortion.”

Horn agreed, and added that she prefers to use the word “abortion” rather than a euphemism.

“I think it is important to say it now,” she said. “It greatly reduces the stigma” if people are forthright about the subject.

“More women than you know have had abortions.”

Many participants held homemade signs, with messages such as “Vasectomies Prevent Abortions” (combined with an image of a pair of scissors) and “Abortion is Health Care.”