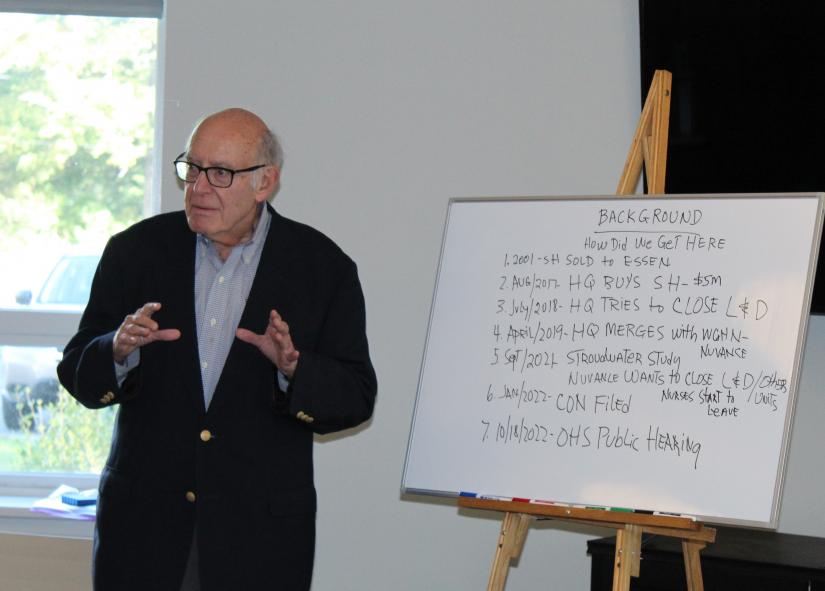 Victor Germack questioned Nuvance’s assertion that it is losing millons of dollars on maternity services. Photo by Patrick L. Sullivan

Save Sharon Hospital makes its case prior to public hearing

SALISBURY — The Save Sharon Hospital group held the second of three discussions Thursday, Sept. 29 at the Scoville Memorial Library about Sharon Hospital’s application to close its labor and delivery unit.

The state Office of Health Strategies (OHS) is holding a public hearing Tuesday, Oct. 18 (on Zoom) on the application from the hospital’s owner, Nuvance, to modify the Certificate of Need that governs the hospital’s activities.

Victor Germack began the presentation with background and a timeline on Nuvance’s acquisition of Sharon Hospital.

He said “We have to tell the state we don’t want labor and delivery to close.”

He questioned Nuvance’s assertion that it is on track to lose $41 million with the status quo, adding that by his calculations the labor and delivery unit is breaking even or even showing “a small gain.”

“My feeling is they want to turn it into a feeder hospital for their system,” he said.

He said having no maternity unit makes the hospital less attractive to doctors who might consider starting a practice in the area.

He said the number of births at the hospital has been consistent in recent years.

“We’re delivering babies all the time,” he said.

Dr. Mortman criticized Nuvance for not making an attempt to work with doctors, the community, or the state to find a solution other than closing the unit.

During the question and answer period, David Singer said SSH has applied for intervenor status at the Oct. 18 OHS public hearing.

If it is granted, SSH witnesses will testify (as opposed to making comments along with the general public).

Both Singer and Germack noted that OHS recently turned down a similar request to shut down the maternity unit at Windham Hospital.

“We can take some comfort in what happened with Windham,”he said.

Both candidates for the 30th District in the state Senate were at the Sept. 29 event — State Representative Stephen Harding (R-107) and Democrat Eva Bernudez Zimmerman. Neither candidate intruded on the discussion or even identified themselves to the audience.