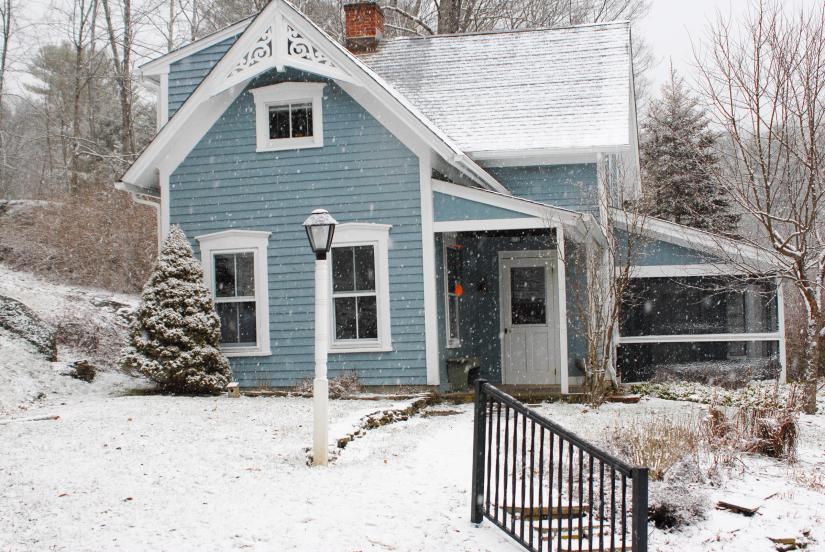 The home on White Hollow Road in Salisbury that was sold by the Salisbury Housing Trust as an affordable housing property. Photo by Griffin Cooper

January 18, 2023
By
Debra A. Aleksinas
“We probably looked at 20 houses. We had to fight tooth and nail just to make an offer, and then we got outbid by folks who came in and paid cash.” — Griffin Cooper, homeowner

SALISBURY — A Millerton family’s disheartening, two-year search for an affordable home turned to good fortune in time for the holidays, thanks to assistance through the private, nonprofit Salisbury Housing Trust.

“We are ecstatic,” said Griffin Cooper, who purchased a home on White Hollow Road in Lakeville on Dec. 19 from the housing trust for $250,000 and moved in just in time to celebrate Christmas and ring in 2023.

“We probably looked at 20 houses,” before being handed the keys to his new home, he noted.

“We had to fight tooth and nail just to make an offer, and then we’d get outbid by folks who came in and paid cash,” recalled Cooper, who is the marketing and outreach coordinator at the North East Community Center in Millerton.

“They had been looking everywhere for two years, but the homes were just scooped out from under them,” noted Leo Gafney, vice president of the Salisbury Housing Trust.

Sellers’ generosity made the home affordable

The three-bedroom, two-bath, 1,519-square-foot antique cottage, which is perched on a natural landscaped knoll on just over an acre of land, was originally listed at $500,000 before being lowered to $450,000, and eventually sold by owners Lee and Barbara Collins to the housing trust for $325,000.

The housing trust was then able to sell the home to the Coopers at a subsidized price.

The couple had resided in the pale blue clapboard house for more than a half-century before deciding it was time to sell. Lee Collins said a recent newspaper article in The Lakeville Journal about the Salisbury Housing Trust led to their decision to sell their home at a price that would add to the town’s affordable housing stock and put the home within reach of the young family of four.

“We found the article very interesting, so we decided to sell it to the housing trust,” said Collins. “It was something we were happy to do.”

John Harney, Housing Trust president and a local Realtor, said the White Hollow Road property was in excellent condition and required only minimal updates, including a new oil tank and improved attic ventilation, in addition to a septic inspection.

“Lee and his wife wanted to support local affordable housing for a young family. They are setting an unbelievable example of doing something to benefit the town,” at their own financial expense, he said.

The economics of the housing market, said Harney, have squeezed out small, no-frills, entry-level houses which were not uncommon in the 1980’s and 1990’s. He said he views efforts of the Salisbury Housing Trust as “helping to provide starter homes for families.”

Young families today, particularly in the Northwest Corner, he said, “are against a rock and a hard place with rising interest rates and with most local homes purchased with cash by flippers, therefore depleting the inventory of traditional starter homes.”

“Trying to get a traditional loan as a middle-class family has its challenges,” noted Cooper, who in the weeks leading up to the transaction being finalized, was cautiously optimistic after two years of high hopes and dashed dreams.

“It’s a wonderful house, but you don’t think it’s really happening. I still have no expectations at all,” he revealed in the weeks leading up to the deal being sealed.

Success after stroke
of serendipity

Prior to moving into a duplex in Millerton pre-pandemic, the Coopers had rented a home just over the line in Lakeville, but it was sold out from under them, said Cooper, so the family decided to explore home ownership options.

The family looked at several dozen houses throughout the Berkshires and Litchfield County, and most were beyond their budget. At one point, the White Hollow Road cottage house came to his wife’s attention, said Cooper, but the original listing price put it out of their reach.

Cooper, who also is a correspondent for The Millerton News, said throughout the experience, he was constantly reminded of the sage advice given to him years earlier from his grandfather, who was a medic during World War II, and his dad: “Don’t overstretch your means.”

She suggested he reach out to Gafney, and that’s when Cooper recalled an article he had written for a local publication on affordable housing in the town of North East and had interviewed Gafney.

“It wasn’t something on my radar even though I had previously had contact with the Housing Trust,” noted Cooper, who reconnected with Gafney.

Cooper described the guidance he received from Salisbury housing advocates as “reassuring,” and he and his family, he said, are thankful for the generosity and kindness of the sellers for parting with their home at a price that made it an affordable option.

Housing Trust on a roll

Since its inception in 2000, and counting the most recent White Hollow Road purchase, the Salisbury Housing Trust has built or renovated 16 homes in more than a half dozen locations throughout town.

The homes are primarily single-family, two- and three- bedroom structures that are priced to sell below the current median home sales price.

Housing Trust officials noted that the two recent home purchases have nearly exhausted their line of credit, and although private donations are “trickling in,” the trust needs to beef up its assets for current and future projects.

“Fundraising is not easy,” noted Gafney. “It’s a lot more difficult than it was years ago and the need is much greater.” As a result, the private nonprofit Housing Trust has decided to apply to the state for financial support.